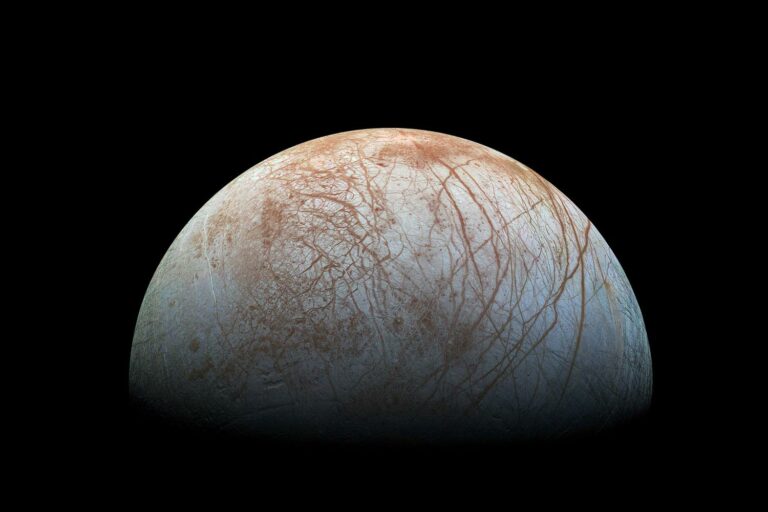 Features found on Jupiter’s moon Europa may dramatically increase the chances of finding life within its sub-surface oceans. That’s because the “double ridges” found all across the Jovian moon’s icy surface are strikingly similar to those found on the ice sheets of Greenland. In Greenland, the ridges are caused by the activity of underground water, a key ingredient for life as we know it.

NASA and the world’s other space agencies are hot on the trail of extraterrestrial life. Numerous missions to Mars are (and were) designed to aid the hunt for life, including the Perseverance rover, which plans to stash tantalizing samples of Martian soil for a future sample return mission.

However, Mars is not the only place humans are looking for life. The clouds of Venus are one tempting target, and Saturn’s moon Enceladus also joined the list in 2005, when researchers spotted water gushing from a subsurface ocean and into outer space. Still, few targets are as tantalizing as Jupiter’s moon Europa.

“Europa is much larger (than Enceladus), almost the same size as Earth’s moon, and therefore likely experiences plate-tectonics,” explained a recent story by The Debrief. “Biologists on Earth believe that plate-tectonics contribute to the flow of nutrients and other life sustaining minerals throughout the biosphere, and astrobiologists believe this same mechanism may be at work on Europa.”

Combined with the recent discovery of features on Earth that mirror those on Europa, the chances of finding life on the Jovian moon have suddenly increased dramatically.

DOUBLE RIDGES IN GREENLAND MIRROR THOSE FOUND ALL OVER EUROPA

“It was really a bit of serendipity,” said study lead Riley Culberg, an electrical engineer pursuing a PhD at Stanford University, in a story for The Daily Beast. “One of my colleagues on this paper, who is a planetary scientist, was giving a presentation on the big open questions in Europa science and showed a picture of these double ridges on the surface. It struck me that I had seen a similar looking feature in my own data from Earth while working on a totally different project related to climate change impacts on the Greenland ice sheet.”

Specifically, Culberg noted an odd mathematical ratio between the height of the Greenland ice sheet’s double-ridges and the actual distance between the peaks. After accounting for the differences in gravity between Earth and Europa, Culberg realized that the double-ridge structures in Greenland and those found on Jupiter’s icy moon shared this exact ratio. This finding is particularly significant because, in Greenland, these double ridges form when ice fractures around pockets of pressurized liquid water that were already refreezing inside the ice sheet. This refreezing process causes the twin peaks to rise in a specific shape, and with the telltale mathematical ratio.

“If Europa’s double ridges also form in this way, it suggests that shallow water pockets must have been, or maybe still are, extremely common in the ice shell,” said Culberg. “Double ridges are by far the most common surface that we see in imagery from Europa, so if they form over water, it would really have to be everywhere in the ice shell.”

On Earth, more water means more opportunities for life to take hold. So, if the mechanism behind the double-ridges on Europa is the same as the one in Greenland, the planet’s 10-15 mile thick crust of ice may actually contain a number of shallow bodies of water that may make for perfect life-supporting environments.

The first chance researchers will get to test this hypothesis arrives around 2031, when NASA’s Europa Clipper spacecraft (which will launch in 2024) makes its way into orbit around the Jovian moon.

Did MIT Scientists Invent a Tool That Can Predict the Future?

“It all comes down to whether Europa is habitable,” said Shawn Brooks  from NASA’s Jet Propulsion Laboratory in a press release announcing the Europa Clipper mission, “and that comes down to having some understanding of what is happening below the surface, which we can’t reach yet.”

Like most discoveries, it will take more data to confirm whether the same water-borne forces created the ridges on Europa as those found in Greenland. However, more than ever, it seems that Europa is as tantalizing a place to look for life as anywhere else in the solar system.

“Europa is fantastic,” said Michael Bland, a US Geological Survey space scientist, in a story for Wired. “Of anywhere in the solar system, outside the Earth, it has the greatest potential, I think, for maintaining a habitable environment that could support microbial life.”