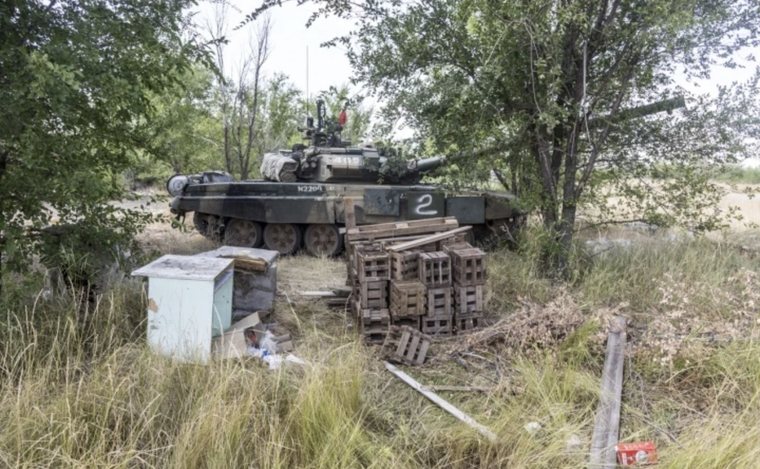 The phrase “one man’s trash is another man’s treasure” took on a curiously literal meaning recently, after residents discovered a fully-operational Russian T-90 tank–seemingly abandoned–in a garbage dump at a deserted airfield near the Russian city of Volgograd.

According to local news outlet V1.ru, a Volgograd resident identified only by the first name “Sergey” told the station he had found the unattended tank while walking near the abandoned Beketovsky Airfield in Volograd’s Kirovsky district.

Checking on the claim, V1.ru said a correspondent was shocked to discover that, indeed, one of Russia’s primary battle tanks was “standing in the bushes in the middle of heaps of garbage not guarded by anyone.”

For their part, the Russian Army denied the T-90 had been abandoned. However, the military’s explanation is perhaps more bizarre than a $4 million armored vehicle suddenly appearing sentry over a pile of trash.

Not so typical was the 50-ton armored vehicle amongst the trash pile, the main cannon menacingly pointed out towards a nearby field as if guarding the flanking tall grass and heaps of refuse.

Serving as Russia’s primary battle tank, the T-90 first entered service with the Russian Army in 1993, after replacing the Soviet T-72. Since 2015, the T-90 has seen extensive use in Russia’s involvement in the Syrian Civil War. In 2016, a video showing local Syrian rebels firing a U.S. TOW anti-tank missile at a Russian T-90 went viral after being uploaded on YouTube.

Based on the images, the tank found at the defunct Beketovsky Airfield appears to be an early T-90A variant and not one of the upgraded and modernized T-90AM.

V1.ru described the tank as “in full combat readiness,” noting compartments on the side of the T-90 contained various tools and tank parts. A local affiliate reporter seemed genuinely surprised that the tank hadn’t been looted or vandalized yet, with its “obviously expensive optics” still intact.

The only thing that seemed to be missing was the 12.7mm Kord heavy machine gun, which mounts to the top of the tank’s turret and serves as a secondary armament to the main cannon. A V1.ru correspondent said the 7.62 caliber machine gun had not been left with the tank, or looters had already made off with the prize before they arrived.

The site where the T-90 was found was described as relatively remote and an area that “regularly attracts the attention of couples looking for a place for solitude in cars or fans of extreme racing.” One of the photos taken near the T-90 showed dozens of discarded Russian Army IRP daily ration boxes, suggesting a more significant Russian military force had been nearby at some point recently.

Worth noting, this isn’t the first time Russian military equipment has been discovered amongst piles of garbage. In July, a janitor stumbled on a 9p39 Igla portable anti-aircraft missile in a dumpster in the western Russian city of Nizhny Novgorod.

When pressed for why or how the T-90 tank appeared at the abandoned airfield, the Russian military offered an odd and curiously detailed explanation.

An official with the press service for Russia’s Southern Military District said the T-90 tank had not been abandoned but rather was waiting for a planned evacuation after participating in training with other armored vehicles from Russia’s 8th Combined Arms Army of the Southern Military District. The tanks evidently had been practicing for several weeks at the airfield to perform a “tank waltz” for the upcoming Army-2021 Military-Technical Form, taking place for the first time in Volgograd August 22- 28.

For those unfamiliar, the Russian Army is well known for its tank ballets, featuring armored vehicles performing highly choreographed maneuvers and “dances” for enthused onlookers.

V1.ru said the Southern Military District’s press office “found it difficult to explain” why the tank had been left unguarded in the middle of a trash heap to “at any moment become a victim of marauders.”

According to Col. Gorobets the T-90, “didn’t get stuck or broken” and the military had started evacuating five tanks from the abandoned airfield at the rate of one tank per day, beginning August 16th. “Today’s tank is the last one. This is all a planned event,” said Col. Gorobets.

According to the division commander, “we do not evacuate equipment on Saturdays and Sundays. It is forbidden.” Offering more oddly precise details, Col. Gorobets added, “a heavy vehicle to evacuate this tank was scheduled for 12:00 today. Came at 12:06, delayed for six minutes due to traffic jams.”

Missing from Col. Gorobets’ explanation was why if there were five tanks to move at a rate of one tank per day and evacuations beginning on Monday, August 16th, why then wasn’t the T-90 that had caused all the fuss removed on Friday, August 20th.

Equally mysterious is precisely how long the tank had been left at the former airfield. “The tank has literally grown into the terrain, it can be seen in the tracks. He’s covered in dust. This is a rather strange sight: you are walking across the steppe, and suddenly there is a tank,” an unnamed member of the V1.ru editorial office told Russian news outlet Novaya Gazeta. “Local residents, who informed us about the find, say that the car stood there for several days without moving.”

Col. Gorobets also denied the T-90 had been left unattended and claimed the tank “was under round-the-clock security of servicemen.” The division commander offered another curious explanation as to why none of the witnesses or journalists who visited, photographed, and climbed on the tank ever saw anyone guarding it.

“The tank was also guarded over the weekend. She [the T-90 tank] was guarded by a Muslim soldier from Chechnya, who at certain moments performed Namaz not far from the place,” said Col Gorobets. “He prays five times a day, this is his right. I spoke with him personally at half past midnight today. The tank was closed, the soldier retreated not far and for a short time. He could not pray near the tank because of the debris around. He served in the Army for 12 years, but now he is entitled to a penalty.”

The Russian Army’s official stance is that the tank was not left unattended. Instead, visitors had the uncanny luck of only visiting the site at the exact same time the T-90’s guard was off praying.

Military personnel have since loaded up and carted off the T-90. A video posted online showed a tank operator driving the T-90 onto the back of a Russian MAZ-537 transport trailer, confirming the tank was indeed operational.

As for the trash pile, Col. Gorobets said, “the dump was formed a long time ago, and it was not made by us. The piles of tires were brought in by the organizers of the races.” Assumingly, illegal street racers also enjoy dining on IRP daily rations, which coincidentally happen to be the same field rations issued by the Russian Army.

Regardless, the Russian military appeared to have cleaned up the entire trash dump in addition to hauling off the T-90. The site was unrecognizable in photos published after the clean-up, with only matted dry grass in the same spot where mounds of trash and a battle tank once sat.

Col. Gorobets, who was reported as being on-site for the tank’s evacuation, expressed some dismay at the local media attention. “I think that this whole story with the tank is not worth special attention.”

Instead, the division commander said the upcoming performance and “tank waltz” are what people should be focused on.

“What is worth looking at is our program at the forum in the Patriot park in Srednyaya Akhtuba. Actually, we will show there what we have worked out here. There will be a “tank waltz”. Young couples will dance on a separate site, and tanks will dance behind them,” Col. Gorobets told V1.ru. “In addition, there will be a “jumping” tank, a dynamic display of infantry fighting vehicles, and armored personnel carriers. If the weather permits, then there will be helicopters.”

“It is strange that one tank in the bushes is interesting to people, but when we trained here for three weeks, for some reason, it was not interesting.”