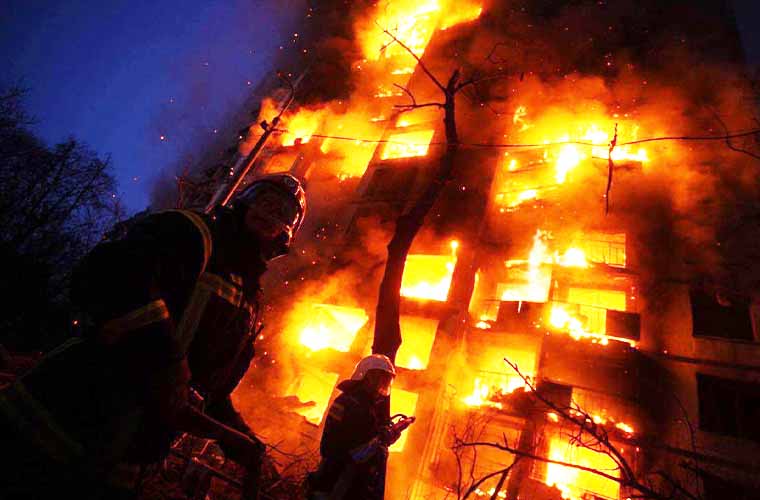 “Overcrowded With The Dead”: Latest On Russia’s Invasion of Ukraine- Day 20

Here is The Debrief’s update of the conflict as of the morning of March 15.

Overnight, Russia conducted several airstrikes on residential areas and civilian infrastructure in the Kyjevo-Svyatoshyns’kyi district of Kyiv. Ukrainian Emergency Services report two residential apartment buildings were hit during the strikes, resulting in the deaths of at least two people.

Additional airstrikes damaged the facade of the Lukyanivska metro station, causing the transport hub to be closed off for repair.

Once a source of daily commute for more than 1 million people, the Soviet-era Kyiv subway has become an ad hoc bomb shelter. An estimated 15,000 to 20,000 civilians have been living underground on the subway platforms and hallways since the invasion began on February 24.

Earlier in the afternoon of March 14, Russian shells targeted the Lavina Shopping Mall on the northwest outskirts of Kyiv near the town of Berkovets. With over 300 stores, a cinema, and a large indoor family theme park, the Lavina Mall was a popular destination for residents and tourists before the war.

Based on reports from the ground and analysis of pre-and-post strike images, The Debrief cannot find any evidence that the targets of Russia’s latest bombardments had any strategic military value. Instead, the recent bombings appear to offer more evidence of Russia’s willingness to engage in indiscriminate terror bombing.

In the past 24 hours, Russian ground forces remained relatively static along all axes of advance.

Toward its primary military objective to seize Kyiv, Russian VDV (airborne) troops launched several unsuccessful assaults against the towns of Irpin and Bucha, west of Kyiv. Supported by engineers, Russia likely hoped to establish a bridgehead across the Irpin River to open an avenue of approach to the capital for heavy-armored vehicles. On March 13, Ukrainian forces destroyed a Russian pontoon bridge over the Irpin near Hostomel.

On March 14, Russian forces did not conduct any offensive operations east of Kyiv and along its northeast axis.

Near Chernihiv and Sumy, Russian troops have moved into defensive positions, conducting only limited contact and reconnaissance patrols.

In the southern area of operations, Russian forces maintain their encirclement of Mariupol, continuing to bombard the port city with artillery and airstrikes. Russian troops and proxy forces also conducted several slow-moving advances to the east of Mariupol. On March 14, the Russian Ministry of Defense claimed that troops had advanced roughly 10 miles from the pre-invasion line of contact in the Donetsk Oblast region.

New evidence shows Russian military and proxy forces have been bolstered by Chechen fighters near Mariupol. On March 14, Chechen leader Ramzan Kadyrov said 5,000 Chechen soldiers were fighting in the southern region. However, this claim has not been verified.

The Ukrainian General Staff said Ukrainian troops had halted an attempted Russian advance from Kherson toward Mykolayiv and Kryvyi Rih on March 14.

Reports of these movements suggest Russia has yet to abandon its efforts to encircle the cities of Mykolayiv and Zaporizhya. However, The Debrief continues to assess it is unlikely that Russia has the necessary combat power to achieve these objectives, provided it remains committed to the siege of Mariupol.

Overall, Russia has not conducted any significant attacks or made meaningful gains since March 9. This is particularly true along its Kyiv and Northeastern axes and approaches toward Kyiv. Russian forces appear to be primarily concentrating on restoring combat capability and improving logistical support before attempting any further meaningful offensive operations.

Many of the maps used by most media outlets to show Russian territorial gains offer a misleading interpretation of events on the ground. Typically, these maps have shown large sections of land extending from Ukraine’s northern, eastern, and southern borders as being “Russian-Controlled.”

These representations give the impression of long contiguous front lines and areas under the control and occupation of Russian forces. However, the war in Ukraine is primarily a positional war right now. Russian troops are only exerting nominal control along pencil thrusts, confined principally to avenues of approach near major Ukrainian cities.

Indications are Russia’s supply problems are currently in dire straits. According to the Security Service of Ukraine (SBU), advanced Russian columns at the tip of these pencil thrusts have been ordered to be “self-sufficient” – meaning forces are to continue while foraging for food and fuel, without the expectation of resupply.

Some evidence for this “self-sufficiency” order has been seen in videos posted to social media. In one example, a video shows three Russian troops stealing chickens from a Ukrainian backyard coop.

On March 14, it was revealed that one of the military aid items Russia had requested from China was pre-packaged, non-perishable military food kits, known in the U.S. as “meal, ready-to-eat,” or MREs.

In yesterday’s update, The Debrief assessed it was unlikely China would be willing to offer Russia military aid. However, it is conceivable that Beijing could provide food and medical supplies since this would not represent lethal assistance seen as highly provocative by the west.

Regardless, to get food supplies to its advanced forces, it will require secure logistics lines, which Russia has been unable to achieve so far.

Reports indicate that Belarusian hospitals and morgues have been inundated with wounded and dead Russian soldiers.

First reported by Svaboda – the Russian language version of Radio Free Europe- Belarusians near the cities of Gomel, Mozyr, and Narovlya, have been mortified by the steady stream of wounded and dead Russian troops flowing in since the invasion began.

There were unrealistically many corpses! The people who were at the Mozyr station just happened to be shocked by the number of corpses loaded on the train,” Svaboda quoted a resident of Mozyr. “In the village of Kamenka near Mozyr, the cemetery was cordoned off, nobody was allowed there, guards were posted. Maybe they started burying Russians there. Especially near Kamenka – Bokov, there is an airfield and a large camp of Russians.”

According to reports, Belarusian doctors have been forced to sign non-disclosure agreements to not discuss the number of wounded and dead Russian troops.

Communications obtained by The Debrief seemed to support Svaboda’s reporting. Medical personnel at Mozyr hospital expressed being “horrified” by the number of Russian corpses coming in shortly after the war began. Belarusians also reported seeing columns of “buses” carrying wounded and dead Russian soldiers traveling towards the airport in Gomel.

“The corpses are not even taken to the refrigerator, but to an ordinary room – 5 by 5 square meters, they are stored there for a while, they rot, stink — then the bodies are taken away somewhere,” said one person familiar with the Mozyr Morgue. “This is done by the soldiers themselves. Everything is guarded. Only the head of the department has access.”

“No one knows how many of these corpses there are, but everyone is terrified of what is happening. Doctors think that there is a mobile crematorium somewhere, or they’re just burying them somewhere.”

In yesterday’s failed attacks on Irpin and Bucha, Russia likely suffered more losses to its remaining VDV (airborne) forces in Ukraine. Out of all of Russia’s casualties thus far, the significant losses of VDV troopers are likely the most costly.

War Crimes and Threats of Chemical Weapons: The Latest on the Invasion of Ukraine

Known for their sky blue berets and distinctive horizontally blue-and-white-striped undershirts, Russia’s Vozdushno-desantnye voyska (in English Airborne Troops) or VDV, are largely considered by most defense observers to be the best trained and most professional forces in the Russian Army.

In Ukraine, Russia has often tried to use its VDV and Spetsnaz (Special Forces) troops as the vanguard for its advances, typically with disastrous results. Numerous videos posted online have shown VDV forces being overwhelmed and destroyed as they attempted to move into heavy urban areas without the benefit of armored support.

At this point, causality numbers remain uncertain. However, a wealth of circumstantial evidence suggests a large portion of Russia’s losses during the initial days of the war came from its venerated VDV and Spetsnaz troops.

As Moscow now scrambles to recruit foreign fighters and private mercenaries to fill the ranks, ultimately, it will likely take years for Russia to be able to adequately compensate for its losses of VDV and Spetsnaz troops in Ukraine.

Russian forces will likely continue to hold defensive positions along its Kyiv and Northeastern axes for the next 24-48 hours.

In the next 24 hours, Ukraine will likely continue conducting counterattacks along the Northeastern axis, posing a serious threat to Russia’s exposed logistic lines. These attacks could likely force Russia to redeploy forces away from its eastern advances on Kyiv, resulting in a further loss of ground momentum.

Russian forces will maintain its encirclement and siege of Mariupol. However, it is unlikely that Russia can assemble the necessary forces to seize Mariupol through a direct assault.

Based on the desperate need for replacements, Moscow will likely continue to try and pressure Belarus into joining the war. However, The Debrief currently assesses the likelihood of the Belarusian military becoming involved in Ukraine as being relatively low.

Instead, the most likely course of action will involve Belarusian troops massing near the border, feigning attack, to pin Ukrainian forces on the border and preventing them from reinforcing the western defense of Kyiv.

Russia still has potential avenues to achieve military success in Ukraine, and Moscow maintains a net advantage in combat power.

However, based on the totality of circumstances, including current geopolitical situations, as of March 15, the odds remain in Ukraine’s favor for being able to force Moscow into a protracted and unwinnable war.

That said, by all indications, Russian President Vladimir Putin remains committed to the invasion of Ukraine. Somberly, this means there is likely still considerable violence and suffering still to come before Ukraine could see any semblance of victory.