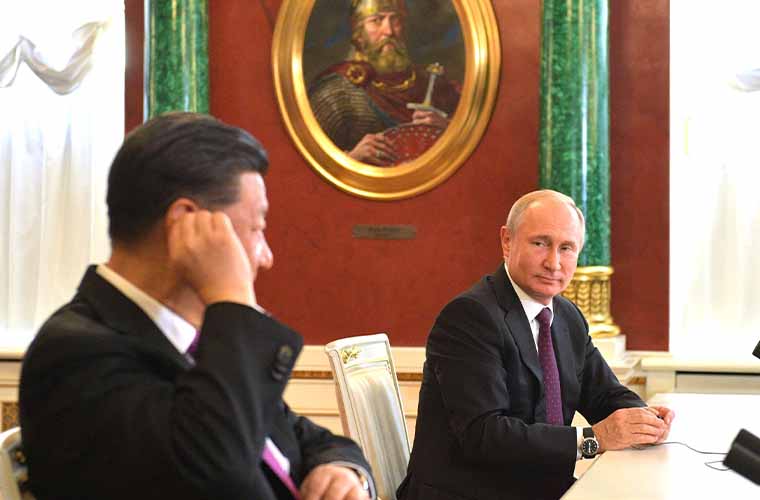 Help Me China! Help! – Latest on Russia’s Invasion of Ukraine

Here is The Debrief’s update of the conflict as of the morning of March 14.

Since March 10, Russia has not conducted any significant offensive operations along its Kyiv and Northeastern axes and toward its primary objective of encircling and capturing the Ukrainian capital of Kyiv. Actions along these lines in the past 96 hours appear to have been limited to reconnaissance contact patrols and probing attacks. Russia continues to employ heavy artillery fires and aerial bombardments on Iripin, Sumy, Chernihiv, and Kharkiv.

The only noteworthy Russian advance occurred along the Donbas axis, north of the besieged city of Mariupol in Donetsk Oblast. A mix of Russian troops and proxy forces from the self-proclaimed Donetsk People’s Republic (DPR) and Luhansk People’s Republic (LPR) successfully captured the Mariupol suburbs Staromlynivka, Yevhenivka, Pavlivka, and Yegorivka.

Russia also conducted a series of airstrikes over the weekend, mainly targeting areas in western Ukraine that have been untouched by the war.

On March 13, Russian ballistic missiles struck the Yavoriv military training center, roughly 12 miles from the Polish border. 35 deaths and 135 injuries were reported as a result of the airstrike.

The Yavoriv military training center has been used in the past by NATO in helping train Ukrainian forces. Elements of the U.S. Army Florida National Guard were evacuated from Yavoriv days before the invasion.

Likely again telegraphing its motivation and intent, a day before the strikes on Yavoriv, the Kremlin announced it would treat international aid shipments by NATO as “military targets.”

On March 13, American journalist and documentary filmmaker Brent Renaud was killed by Russian troops near a checkpoint in Iripin. A US photographer, Juan Arredondo, was also wounded in the attack.

According to Arredondo, he and Renaud were traveling by car to Iripin to film refugees when they were suddenly ambushed by Russian forces. Renaud was reportedly shot in the neck during the attack.

Renaud’s death is the latest in a string of seemingly targeted attacks on journalists attempting to cover the war in Ukraine.

On February 26, two reporters with the Danish newspaper Ekstra-Bladet, Stefan Weichert and Emil Filtenborg Mikkelsen, suffered multiple gunshot wounds after being ambushed near the town of Okhtyrka. Both men survived the attack and have since been evacuated and hospitalized in Denmark.

“The gunman, who we weren’t able to identify, was located about 15 meters behind our car,” said Weichert. “He couldn’t have failed to see the ‘press’ sign that was clearly visible on our car.”

Hauntingly similar to the ambush that killed Renaud on February 28, a team of reporters with Sky News came under attack shortly after passing through a military checkpoint in Bucha, just west of Kyiv.

Dramatic video of the event shows the tires of the team’s car being disabled just before the reporters come under a hail of gunfire. Reporter Stuart Ramsay suffered a gunshot to the lower back while cameraman Richie Mockler’s body armor stopped two other rounds. Fortunately, all survived after seeking refuge in a nearby warehouse and were ultimately evacuated by the Ukrainian police.

On March 3, two Czech journalists reporting for Voxpot, Vojtech Bohac and Majda Slamova, and two Ukrainian journalists with Central T.V. came under fire while traveling by car near Makarov, another town on the outskirts of Kyiv. Fortunately, none of the journalists were injured during the attack.

On March 6, Swiss photographer Guillaume Briquet was shot at by Russian troops shortly after passing near a Ukrainian checkpoint near the southern city of Mykolaiv. The attack came despite Briquet’s car having numerous “Press” markings covering it.

After stopping his vehicle, Briquet said Russian troops stole 3,000 euros, his passport, helmet, laptop, and other reporting equipment before ultimately releasing him.

According to Reporters Without Borders – an international NGO promoting freedom of the press- nearly 60% of targeted attacks on journalists have occurred in the western outskirts of Kyiv. Many other fatal incidents involving the targeting of civilians, including women and children, have also been reported near Irpin, Bucha, and Hostomel, just west of Kyiv.

The Chechen forces of warlord Ramzan Kadyrov and Wagner mercenaries are believed to be operating within this western approach to Kyiv. Kadyrov claimed he sent 10,000 soldiers to support Russia’s invasion, including his three sons, one of whom is 14.

On March 13, Kadyrov further claimed he had traveled to Ukraine to fight alongside his forces. The Chechen television channel Grozny posted a video on its Telegram showing Kadyrov in a darkened room, flanked by his troops, discussing a supposed military operation. The video was reportedly filmed in Hostomel, 10 miles northwest of Kyiv.

Kadyrov’s claims could not be independently verified.

Based on numerous reports, The Debrief assesses it is highly likely that a significant number of disturbing war crimes are being committed by Russian military and proxy forces in regions west of Kyiv. In particular, the towns of Irpin, Bucha, and Hostomel.

Spokesperson for the Chinese Foreign Ministry, Zhao Lijian, accused the U.S. of “spreading disinformation targeting China on the Ukraine issue, with malicious intentions.” Zhao said the reports were “fake news” without directly denying the allegations when pressed by BBC News.

In a CNN interview, U.S. national security adviser Jake Sullivan said the U.S. was “communicating directly, privately to Beijing that there will absolutely be consequences for large-scale sanctions evasion efforts or support to Russia to backfill them.”

Today, Sullivan is scheduled to meet with his Chinese counterpart, Yang Jiechi, in Rome, Italy. It’s assumed during the meeting that the U.S. will try to further dissuade China from coming to Russia’s aid.

So far, China has been trying to delicately straddle the geopolitical fence on Russia’s invasion.

Weeks ago, during the opening ceremony to the Winter Olympics in Beijing, Chinese President Xi Jinping and Russian President Vladimir Putin declared a new alliance with “no limit.” China has also so far refrained from condemning Russia for the invasion, saying Moscow’s “legitimate security concerns” should be taken seriously.

Chinese officials and state media have likewise been echoing Russia’s official lie about a “special military operation” and giving voice to Kremlin disinformation about Ukrainian biological or chemical weapons.

At the same time, Beijing has been publicly offering “unwavering support” for Ukraine’s sovereignty, calling for peace and diplomacy to end the war.

Assessing the overall situation, The Debrief finds it unlikely that China will ultimately opt to aid Russia’s military goals in Ukraine.

Extraterrestrial Minerals Never Before Seen on Earth Discovered in Meteorite


Extraterrestrial Minerals Discovered in Meteorite Have Never Been Seen on Earth

Unlike Russia, China is highly dependent on the global economy. Beijing will be keen to avoid incurring any Western sanctions that could come from aiding Putin’s military adventure.

Coming to Moscow’s aid would also cut starkly against China’s commitment to an international policy of “noninterference,” it has been preaching since Xi came into power.

Ultimately, China likely sees the consequences of providing military aid to Russia as vastly outweighing any benefit that might come from undermining American power. Instead, China will probably try to quietly maintain existing economic engagement with Russia while minimizing its exposure to Western sanctions.

Conversely, China could have a golden opportunity right now to assert itself as a significant international player by turning its back on Putin and stepping in on behalf of Ukraine to try and end the conflict.

This outcome may seem unlikely. However, there is a legitimate argument to be made that trying to emerge as a “global good guy” offers far more benefit to Chinese self-interest than handcuffing itself to Putin’s Russia.

Russian forces will likely hold defensive positions, continuing their “siege-and-starve” approach instead of engaging in any significant offensive actions along the Kyiv and Northeastern axes in the next 24-48 hours.

Ukrainian troops will likely continue to engage in agile counter-attacks against Russian supply lines, particularly to the south and southeast of Chernihiv.

Within the next 48-96 hours, Russia may attempt a concentrated attack to seize the city of Sumy to consolidate gains and secure logistical routes east of Kyiv. It is presently unclear if Russia can engage in a successful combined arms attack to seize Sumy.

Russian forces will maintain its encirclement and siege of Mariupol. However, it is unlikely that Russia can assemble the necessary concentration of forces to seize Mariupol through a direct assault.

Indications are Russia is attempting to pull forces from its international deployments to reinforce operations in Ukraine. These reported moves include roughly 800 soldiers from Armenia and 1,500 troops from Russia’s 40th Naval Infantry Brigade of its Pacific Fleet. It is unlikely that these deployments will have any meaningful immediate effect on the invasion’s course.

According to Ukraine’s Military Intelligence Directorate (GUR), Russia is also recruiting mercenaries from Syria and Libya to join in the invasion. Over the weekend, the Kremlin claimed 16,000 Syrians wanted to join the fight in Ukraine. Likely, this number is greatly exaggerated.

While Russia may successfully recruit some foreign mercenaries from Syria and Libya, any deployments could likely take weeks. These soldiers will also likely be of even lower quality than existing Russian forces. The most promising prospect for Moscow is a long-term pool of low-quality replacements.

Russia appears to be pressuring Belarus to join in the invasion. However, there are numerous unconfirmed reports that Belarusian forces are resisting joining in the conflict. According to some Belarusian and Ukrainian news outlets, Russian commanders have been placed in charge of Belarusian troops, which has resulted in riots and some troops going AWOL.

The Debrief cannot confirm these accounts; however, it is highly likely that Russia desperately wants Belarus to help reinforce its depleted ground forces.

As the invasion enters week three, Russia’s overall chances for military success continue to look bleak. On the balance of probabilities, current indications favor Ukraine being able to force Russia into a protracted and unwinnable war.