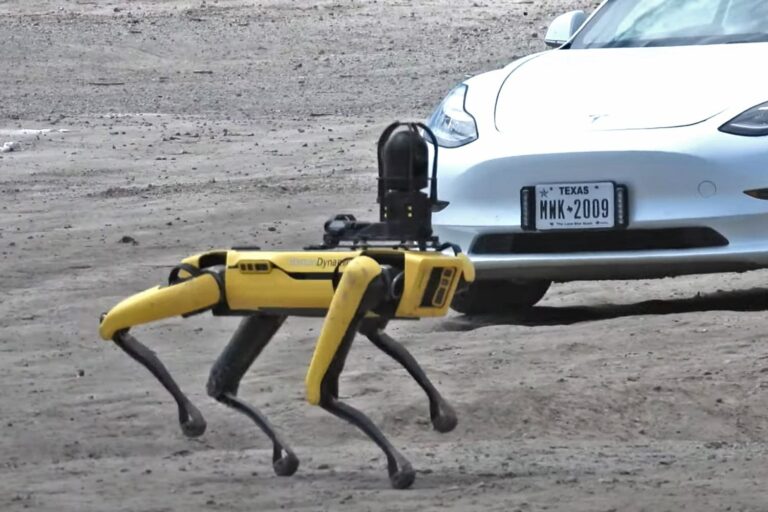 In an ongoing series of tests with its new Starship prototype, SpaceX recently saw its first successful landing on Wednesday, as the tenth in a series of experimental aircraft the company has built made its way safely back to Earth with a soft landing.

However, within ten minutes of its historic touch down, the spacecraft exploded.

The prototype was launched from SpaceX’s South Texas site shortly after 6 PM EST on March 3, and returned to Earth after ascending 10 kilometers into the sky. Wednesday’s flight marks the company’s most successful test flight yet with its experimental spacecraft, with which Elon Musk plans to send a crewless mission to Mars in just three years; by 2026, he claims his company will be sending humans there.

While Musk and SpaceX’s latest experimental launch and landing of the SN10 were making headlines, something else had caught the attention of internet onlookers: the appearance of a robotic dog that was spotted exploring the crash site.

The robot was acquired by SpaceX from Boston Dynamics, a Waltham, Massachusetts-based robotics company known for its futuristic robotic designs. The company was purchased last December by the Hyundai Motor Group. The robot dog, which it calls “Spot,” is one of the Massachusetts company’s most popular models.

“Spot is an agile mobile robot that navigates terrain with unprecedented mobility,” the company’s website says, “allowing you to automate routine inspection tasks and data capture safely, accurately, and frequently.”

Spot currently comes in two models, the basic “Spot Explorer,” and the “Spot Enterprise,” which has self-recharging capabilities, as well as expanded use for autonomous missions.

Upon acquiring one of the robots from Boston Dynamics, SpaceX named their robot “Zeus,” even designating a special red dog house where the robot is kept when it is not in use.

It is presently unclear what, precisely Zeus was exploring as the robot dog was photographed moving along the SN10 wreckage. Some observers noticed that Zeus appeared to spend most of its time inspecting a portion of the upper stage booster component of the rocket called the Super Heavy.

NFTs Are Forcing the Music Industry to Evolve, and It Doesn’t Look Good for Big Labels

Presently, all of Boston Dynamics’ Spot models are capable of being integrated with a 360° camera, the Spot Cam, which features color panorama and communication capabilities. This, in addition to site documentation software that is designed to save time on job sites by monitoring and recording data in a variety of ways that are beneficial to workflow.

In addition to the cameras that are part of the robot’s innate design, it has been speculated that Zeus was equipped with sensory equipment which allows it to gather valuable information from the crash site, which at the time of its inspection may have still been unsafe for any actual on-site SpaceX personnel. Presently, the robot’s Spot CORE AI operations system allows third party sensor integration, making it ideal for the very sorts of applications seen at the SpaceX wreckage site last week.

SpaceX’s objectives with Starship, in addition to eventually carrying humans to Mars, will be to dramatically reduce costs of reaching space, and thereby enable for more frequent, less costly studies in outer space.

Musk eventually plans to deploy an entire fleet of the spacecraft, and while the company is still working out the kinks with its current Starship prototypes, it is hard to imagine a more futuristic scenario than Starship test launch crash sites being examined by robots resembling canines capable of advanced remote sensing.

The future really is now.