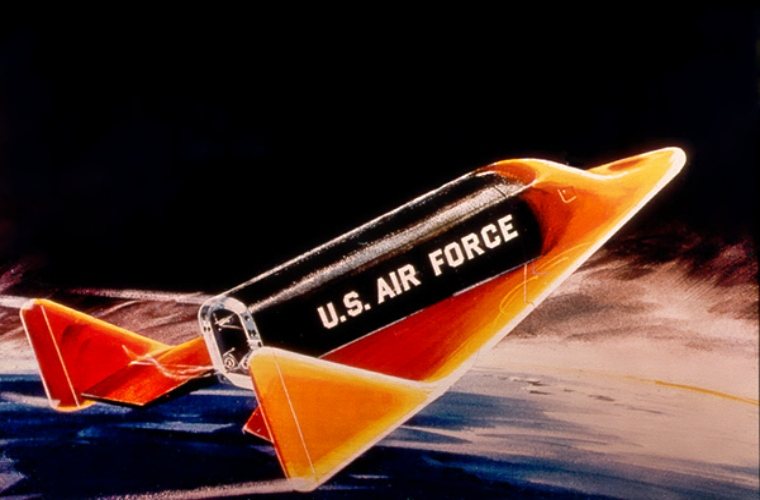 When first conceived, the American spaceflight program confronted a series of pressing questions. Who would take Americans into space? What vehicle would take them? The answers to those questions have become so transcendentally accepted that the general public typically forgets there was ever a question to begin with.

NASA takes Americans into space. And typically, NASA sends their astronauts (usually military pilots) to space in unpowered capsules, atop rockets, which then sink back to earth on a parachute, lifeless (the exception being the Space Shuttle). But before Alan Shepherd made his suborbital flight, spam-in-a-can-style aboard a Mercury capsule, space exploration logistics were passionately debated; NASA, and their capsules, had a domestic competitor in the space race: The US Air Force, proposing that spaceflight be conducted in powered, reusable spaceplanes.

The USAF’s most viable spaceplane program was the X-15, an experimental aircraft that actually flew beyond the earth’s atmosphere, entering space itself. The X-15 was a fascinating machine, fully deserving of its own Debrief article (stay tuned). But few remember the USAF’s other early spaceplane program: the Boeing X-20 Dyna-Soar, which predated the Space Shuttle by a quarter-century.

The X-20’s ultra-obscure status is owed to the fact that the thing never flew. Construction was never even finished. Aside from a partially constructed prototype, the X-20 has remained a figment of industrial imagination, a set of blueprints gathering dust.

Despite never flying (or being fully built), the X-20 was a genuine program. Born from Operation Paperclip (and the Nazi plot to launch hypersonic spaceplanes from Europe and bomb New York before landing at Japanese bases in the Pacific), the X-20 program ran from October 1957 until December 1963. The X-20 Dyna-Soar cost US taxpayers $660 million ($5.58 billion at today’s rates). The program was initially designed with explicit military purposes: aerial reconnaissance, bombing, space rescue, satellite maintenance, and satellite-killing.

Unlike the Mercury (or Vostok) capsule, the X-20 had properties like an aircraft. Designs called for a low-wing, tail-less, delta shape, featuring a single pilot front and center. Behind him, an equipment bay that could harbor weapons or reconnaissance equipment. The X-20 was going to fly to space, too, but instead of a ballistic re-entry, arrested by parachute, the X-20 was slated to re-enter gracefully, gliding, landing on a runway. But rubber landing gears wouldn’t work–they would have become incinerated during re-entry. So instead, Goodyear created a pair of retractable wire-brush skids for the X-20 to land on.

Whereas the X-15 would be released from beneath the wing of a B-52 mothership before igniting its rocket engine and powering itself to space, the X-20 would ride a rocket from Cape Canaveral, much like the Mercury capsule. After separating from the rocket, the X-20 would rely upon its two rocket engines, ultimately achieving speeds of 17,500 miles per hour and altitudes of 530,000 feet.

The X-20’s unique mission profiles, and the demanding flight characteristics, required talented pilot operators. In April 1960, seven pilots were secretly chosen from the astronaut corps to join the X-20 program. Among the pilots chosen, X-15 veteran Neil Armstrong–still nearly a decade away from landing the Eagle on Mare Tranquilitatis.

Armstrong never flew the X-20, of course. No one did. Nagging problems plagued the spaceplane’s development. Securing funds was a constant problem, naturally. But the most time-consuming problem was uncertainty regarding the launch vehicle. Which rocket would the X-20 ride to space? The USAF advocated for LOX/JP-4, fluorine-ammonia, fluorine-hydrazine, or RMI (X-15) engines.

Meanwhile, Boeing wanted their X-20 Dyna-Soar to ride an Atlas-Centaur combo. Eventually, the Air Force settled on the Titan rocket. Since the Titan I was not powerful enough to launch the five-ton X-20 into orbit, the Titan III was chosen–but the long-burning debate had delayed the X-20 project (whereas the Mercury missions were underway by 1961).

Even with a launch vehicle selected, the utility of the X-20 program was questioned. What is the purpose of this program? What is the X-20 going to do up there? The X-20 was originally designed to conduct aeronautical research and weapons system developments simultaneously. But as the program progressed, questions persisted. In January 1963, Secretary of Defense Robert McNamara commissioned a study to determine the feasibility of the X-20’s weapon development objective.

The results of the study doomed the X-20 program. McNamara found that the USAF had been emphasizing the study of controlled re-entry without properly developing objectives for the X-20’s orbital flight itself (i.e., weapons systems development). The X-20 program was all about establishing a controlled re-entry (while neglecting weapons development). But McNamara didn’t really care if re-entry was controlled (like the X-20) or uncontrolled (like a Mercury capsule’s plunge)–that was for the aerospace nerds to figure out. For McNamara and the DoD, the X-20 program no longer made sense. He pulled the plug just as prototype construction began.

Despite never taking flight, the X-20 was not a pure tangent; the spaceplane concept has a proud legacy. The comparable (albeit less ambitious) X-23 PRIME re-entry vehicle was tested, without pilots, in the mid-60s. From 1969 to 1973, the Marietta X-24 experiment aircraft made 28 (atmospheric) test flights to gauge the feasibility of unpowered re-entry and landing. The Space Shuttle, which debuted in 1981–and is perhaps the most remarkable machine ever constructed–shares a common ancestor with the X-20. And the mysterious Boeing X-37, an autonomous, reusable spaceplane, which has been conducting test flights since 2008, is a direct descendant of the X-20.