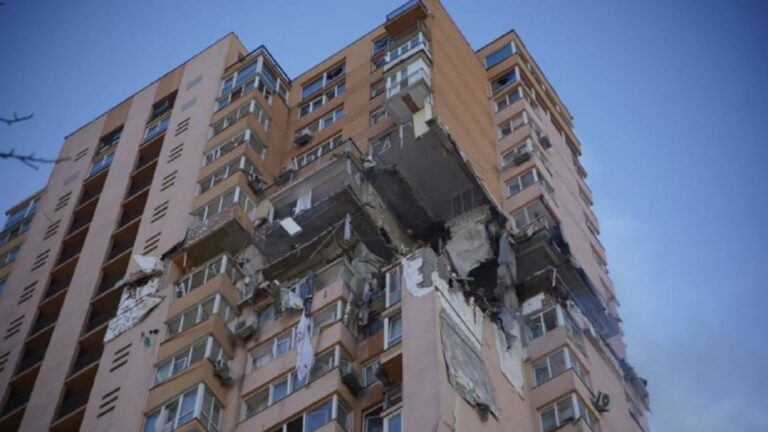 A high-rise apartment building near the airport in Kyiv that was hit by a missile. (Image Source: Ukrainian State Emergency Services)

Russia’s federal communications regulator, Roskomnadzor, demanded that media outlets in the country not describe Russia’s continued invasion of Ukraine as an “assault, invasion, or declaration of war.”

Outlets who failed to comply with the order, including not deleting previous news coverage depicting Russia’s involvement as any other than a “special military operation,” would be banned and face heavy fines, Roskomnadzor warned.

“Roskomnadzor also launched an administrative investigation into the dissemination of unreliable publicly significant information by the above-mentioned media,” said the censorship agency. Roskomnadzor further warned violations could be punishable by a fine of up to five million rubles, equivalent to roughly $60,000.

Ironically, after threatening to censor media outlets over their coverage by early afternoon (Moscow), Roskomnadzor’s website seemed to be down. The Debrief was unable to determine the reasons for the website outage. However, the site was still inaccessible by 4pm (Moscow).

Russian President Vladimir Putin certainly has some legitimate reasons to be concerned with how the local populace is taking the news of Russia’s invasion of neighboring Ukraine.

Since launching its attack early Thursday morning, there have been widespread public protests, and several prominent Russian figures have spoken out against Putin’s war on Ukraine.

On Friday, Sofia Abramovich, daughter of Russian billionaire oligarch, posted a picture on her Instagram that read “Putin wants a war with Ukraine,” and “The biggest and most successful lie of Kremlin’s propaganda is that most Russians stand with Putin.”

Lisa Peskova, the daughter of Kremlin spokesman Dmitry Peskov, also posted a simple message on a black background on her Instagram that read: “#Нетвойне,” or “No to war.” The daughter of former Russian president Boris Yeltsin, Tatyana Yumasheva, likewise shared anti-war sentiments on her social media.

Elena Chernenko, a veteran correspondent for Kommersant newspaper, penned an open letter condemning the invasion of Ukraine. “War has never been and will never be a method of conflict resolution, and there are no excuses for it,” wrote Chernenko.

More than 200 Russian journalists – including some from state-run media outlets – have added their names to Chernenko’s letter condemning Russia’s military action against Ukraine.

Elena Kovalskaya, the director of the Meyerhold Center, a state-funded theater in Moscow, resigned from her position on Friday, saying, “It’s impossible to work for a murderer and receive your salary from him.”

So far, Russian authorities have arrested nearly 2,000 people at anti-war protests in 60 cities, including Saint Petersburg and Moscow. Online videos have shown Russian police grabbing and arresting protesters from crowds that numbered in the thousands, seemingly at random.

Russia’s state-run media coverage of Russia’s invasion has so far looked like an alternate universe when compared to the reports from journalists and citizens on the ground in Ukraine.

After a missile strike on a high-rise apartment building in the capital city of Kyiv early Saturday morning, Russian-state media outlet TASS said the damage had been caused by an errant Ukrainian air-defense missile.

“The damage to the building indicates an air defense missile impact. It could be seen clearly on the video,” an unnamed source reportedly told TASS.

TASS, the largest news agency in Russia, did not include any images of the gaping hole to the residential building or video showing the strike in their coverage, which was widely available on social media. TASS likewise did not mention that claims of the damage resulting from a “Buk-M1 air defense missile” seemingly contradicted a report they ran two days prior that all of Ukraine’s air defenses had been neutralized.

Russia has insisted it has only used cruise missiles and precision-guided munitions to target Ukraine’s military infrastructure.

“Let me stress once again that only infrastructure sites of the Ukrainian Armed Forces are being targeted, ruling out damage to residential and social infrastructure,” Defense Ministry spokesman Igor Konashenkov told a briefing on Saturday.

Reports on the ground, however, tell a different story. Numerous reports, many of which have been verified by multiple international media outlets, have shown the aftermath of artillery or bomb strikes to apartment buildings, hospitals, schools, and other residential areas throughout Ukraine.

Video of the missile strike on the apartment building in Kyiv. https://t.co/vpTiXnwZxF pic.twitter.com/SUch9AzAc9

In addition to growing public resentment and accusations of war crimes, there is another reason Putin might want to shield Russian eyes from what’s going on in Ukraine.

According to the Ukrainian Ministry of Defense, more than 3,500 Russian soldiers have been killed as of Saturday morning. Roughly 2 dozen Russian aircraft and hundreds of tanks and armored vehicles are also claimed to have been destroyed in the first 48 hours of the conflict.

It is impossible to know how accurate these figures are. Many defense analysts suspect that Russian losses aren’t as high as Ukraine’s Defense Ministry has reported. Nevertheless, there are plenty of reasons to suspect things aren’t going according to plan for Russia.

By late Saturday, roughly 60 hours into the invasion, there are no indications that Russia has been able to successfully seize and hold any major Ukrainian city or decisively achieve air superiority.

Foreign Policy correspondent Jack Detsch reports that senior U.S. officials have seen indications that the Kremlin was “increasingly frustrated” with the lack of progress, particularly in the northern sector near Kyiv.

After intense fighting on the outskirts of Kyiv throughout Friday night and into Saturday morning, Russian troops were unsuccessful in achieving any meaningful breakthrough in the Ukrainian capital. On Saturday morning, Ukrainian President Volodymyr Zelensky posted a video of himself on social media casually walking the streets of Kyiv, assuring the Ukrainian people that things were still under control.

Ultimately, the Kremlin’s media censorship may distort the Russian public’s perception of its ongoing invasion. However, unfortunately for Putin, that will not change the reality of what’s actually going on in Ukraine.

On Saturday afternoon, the headline on Novaya Gazeta’s main page reads: “Putin is at War with Ukraine. Day Three,” next to a large image of a snow-covered Russian soldier lying dead near a burned-out tank.

In an article on Roskomandzor’s threats of censorship, the Moscow-based independent English-language news outlet Moscow Times wrote, “The invasion of Ukraine is taking place during an unprecedented crackdown on the Russian opposition, with top protest leaders assassinated, jailed or forced out of the country.”