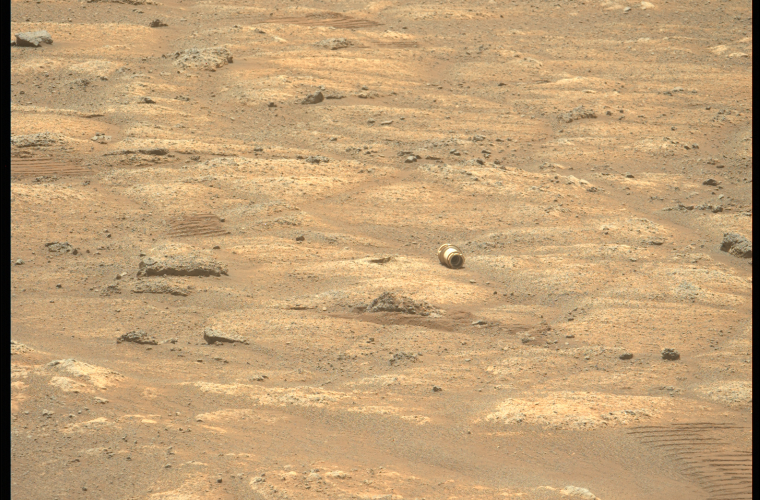 NASA’s Mars Perseverance Rover has photographed something or the red planet’s surface that is clearly not natural. Unfortunately for alien hunters, the object in question, which was photographed by the rover on February 16th, isn’t a flying saucer, a huge face, or even pyramids. Instead, the tantalizing image is merely a drill bit the rover itself discarded months earlier.

“This particular drill bit was installed before launch to close out the drill and keep the inside protected,” the Perseverance team tweeted back in July when the bit was first dumped. “To keep my science clean and clear, I’m leaving it aside before I start to collect samples with new, pristine drill bits.”

Researchers looking for evidence of extraterrestrial intelligence have often zeroed in on objects photographed on Mars. Most famously, researchers once thought they saw a huge face on Mars, as well as enormous pyramids. To date, all of those photographs have proven to be natural formations or are simply unidentifiable blobs. However, this latest image of a clearly artificial object is crystal clear.

Surprisingly, this isn’t the only piece of equipment the rover has ditched in the last 12 months. In March of last year, Perseverance sluffed off a belly plate used to protect its sample storage system during landing. If all goes according to plan, the samples Perseverance stores within that system will be retrieved by a future mission and brought back to Earth for detailed analysis. The Debrief recently reported on the progress of those efforts, including the goal of returning Perseverance’s samples before the end of the decade.

Perseverance has already found evidence of Mars’ past habitability during its year on the red planet. Additional research indicates that the red planet may still be volcanically active.

Perseverance doesn’t plan to leave any more pieces of itself on Mars. However, the Ingenuity Helicopter drone carried in the rover’s belly may yet crash during a future flight, leaving even more man-made debris on the planet’s rocky surface.

As for finding any future photographs of clearly unnatural debris on the planet, NASA’s Mars Reconnaissance Orbiter has collected a massive database of high-resolution pictures that have yet to be studied in great detail. This treasure trove of images may not yield anything made by E.T., or it may deliver the first image of a clearly alien device within our solar system.