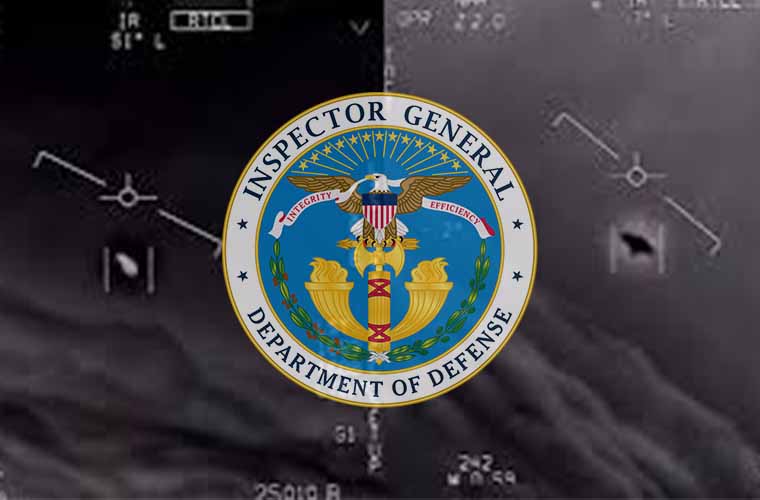 Inspector General Launching Evaluation into The Pentagon’s Actions With UFOs

The Department of Defense Office of the Inspector General has announced the launch of a formal evaluation into The Pentagon’s actions regarding “Unidentified Aerial Phenomena” or UAP.

According to a memorandum provided to The Debrief and then released by the Inspector General, “The objective of this evaluation is to determine the extent to which the DoD has taken actions regarding Unidentified Aerial Phenomena (UAP).”

“We may revise the objective as the evaluation proceeds, and we will consider suggestions from management for additional or revised objectives,” reads the memorandum.

In December 2017, the New York Times published an article revealing a secretive study within the Pentagon known as the Advanced Aerospace Threat Identification Program (AATIP) as well as the “unofficial” release of three videos captured by the Navy in 2004 and 2015, which showed indistinct airborne objects claimed to be UAP.

More recently, in 2020, the Department of Defense officially released the three videos, acknowledging that the aerial phenomena observed in the videos remain characterized as “unidentified.” In mid-August of 2020, the Pentagon formally acknowledged they had established a task force looking into UAP. Recently, with the passing of the FY 2021 Intelligence Authorization Act earlier this year, the UAP Task Force was given the task to produce a report about its findings. The report is due in June of this year. Ahead of this upcoming report, the Office of the Inspector General is now looking into the issue of UAP.

As an independent, objective agency, the Office of Inspector General functions as the official Pentagon watchdog, providing administrative and criminal investigations, audits, and oversight for programs and operations falling under the Department of Defense.

Two sources familiar with the matter tell The Debrief the IG Office’s decision to launch the evaluation was prompted by complaints from congressional leadership regarding the DoD’s handling of the UAP topic.

While the Senate Select Intelligence Committee is responsible for directing June’s highly anticipated Advanced Aerial Threats Report, sources say it was representatives of the Senate Armed Services Committee who prodded the Inspector General Office’s recent involvement. The IG Office did not immediately respond to questions by The Debrief regarding the inspiration behind the evaluation.

The IG Office says the current probe of the DoD’s handling of encounters with unidentified aerial phenomena is not an investigation into alleged criminal or administrative violations. Instead, the mission of the evaluation is to “promote the economy, efficiency, and effectiveness of DoD programs and operations.”

Because the inquiry is an evaluation and not an investigation, the IG Office will likely not be getting involved with some of the most contentious aspects of UAP news that has been coming out of the DoD in the last three years. Namely, the chaotic, often contradictory, messaging on UAP by DoD Public Affairs, and disputed claims by former Director of the National Programs Special Management Staff for the Office of the Under Secretary of Defense for Intelligence, Luis Elizondo.

In December 2017, Elizondo went public, revealing the existence of AATIP, saying he formally ran the reportedly secret UFO program for the DoD. Initially, confirming his role with AATIP, the Pentagon has since disputed these claims saying Elizondo “had no assigned responsibilities” with the program. Elizondo has told The Debrief that the Pentagon is “playing games” but is cagey about speculating why they have changed their story regarding his involvement in the program.

Last week, Senator Harry Reid, who initiated the Pentagon’s UAP program in 2008, released a statement publicly confirming that Elizondo “worked tirelessly” as the “head of AATIP.”

UPDATE: Former Senator Harry Reid has sent us a letter confirming @LueElizondo’s role at #AATIP. “As one of the original sponsors of AATIP, I can state as a matter of record Lue Elizondo’s involvement and leadership role in this program.” #uapdisclosure https://t.co/VoQ5XU8GmJ pic.twitter.com/L6mQ9GGYCX

The Debrief spoke with a former Pentagon advisor to the White House who confirmed Elizondo’s accounts of having run investigations into UAP prior to leaving the DoD in fall of 2017.

“Lue briefed myself and two other senior advisors multiple times in early 2017,” said the former official who did not wish to be named on the record out of concerns with his current employer.


The Zephyr could be a game-changer for intelligence, surveillance, target accusation, and reconnaissance support in combat environments

The former White House advisor went as far as telling The Debrief they personally called Pentagon Public Affairs after The Pentagon first said Elizondo “had no responsibilities” with AATIP in 2019. “I told them I was read-in on this stuff, I was briefed several times by Lue. He was there when some of the pilots spoke to me about their encounters. I was like, how can you say this?”

Without elaborating, the former official told The Debrief they understand why the Pentagon is now denying Elizondo was ever involved in AATIP or UFO investigations with the DoD. “But I still don’t agree with it,” the former senior advisor said.

When reached for comment, The Pentagon’s Public Affairs Office refused to comment on the statements provided by the former White House advisor on Elizondo’s role.

The Office of Inspector General says their evaluation of the DoD’s handling of UAP will include the Offices of the Secretary of Defense, Military Services, Combatant Commands, Combat Support Agencies, Defense Agencies, and the Military Criminal Investigative Organizations. “We may identify additional locations during the evaluation,” said the IG release. The release is being sent to the directors of various government agencies, including the government’s scientific research arm, the Defense Advanced Research Projects Agency (DARPA) as well as NORAD, the Joint Chiefs of Staff, and the National Geospatial-Intelligence Agency.

When asked if the final evaluation report would be made publicly available, an official with DoD’s Office of Inspector General told The Debrief, “DOD IG Public Affairs doesn’t speculate on the classification of reports or evaluations that have yet to be released.”

The Debrief will continue to provide updates as this story develops.