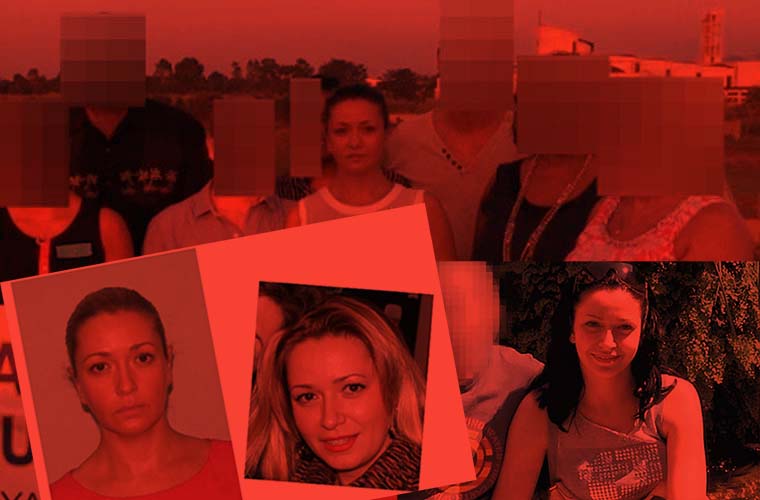 For over a decade, the attractive raven-haired, sometimes blonde “Maria Adela Kuhfeldt Rivera” charmed her way into social scenes across Europe, including the inner circles of senior NATO officials.

Founding her own jewelry company, Serein, and boutique in Naples, Italy, Maria appeared to be nothing if not a thriving, self-sufficient businesswoman with a unique backstory. Describing her colorful “custom designed” jewelry as being “created for the elegant woman who is never excessive.”

According to the August 26 joint report, the international collective, made up of nearly two-dozen investigative journalists from four different media outlets, began their investigation 10 months ago after discovering a suspicious Russian passport issued to Maria Rivera.

The passport number issued to “Maria” matched the same sequence as other passport numbers used for the cover identities of undercover GRU operatives, previously outed by Bellingcat and The Insider.

Investigation into who exactly “Maria” was revealed that in 2005, attorneys in Peru had asked for someone named Maria Adela Kuhfeldt Rivera, born September 1, 1978, to be added to the country’s national citizen database. However, the citizenship application was denied after Peruvian officials could not verify the birth of a “Maria Rivera” and discovered that a provided baptism certificate was a forgery.

Nevertheless, in 2006 Russia issued a passport to “Maria Adela,” using the same date of birth as on the Peruvian citizenship application.

According to investigators, this is when Olga Kolobova became “Maria Rivera,” and the then 24-year-old became an operative in GRU’s Department 5, also known as the “Illegals Program,” tasked with inserting covert military spies around the world.

In what has turned out to be a spy disaster that continues to inflict humiliation, investigators say that the passport number issued to “Maria Adela” coincides with a range of numbers given to at least six other known GRU spies. Previously known spies using the same passport number range include an officer indicted in the poisoning of Bulgarian arms manufacturer Emilian Gebrev and another officer involved in the poisoning of Sergey Skripal.

Journalists say “Maria’s” legend, or fictitious background bolstered by fraudulent documents to support a spy’s cover identity, included her working as a “leading specialist” at Moscow State University and living in Moscow.

Interviews with people who had befriended “Maria Adela” said that the Russian spy claimed she was born in Callao, Peru, as the illegitimate child of a German father and Peruvian mother.

In a notably bizarre addition to her cover story, “Maria” claimed that she had been raised by a Russian family after being abandoned in the Soviet Union when her mother came to Moscow to attend the 1980 Olympic Games.

Details of “Maria’s” activities from 2006-2011 are scarce. However, investigators say the alluring spy appears to have bounced around Malta, Paris, and Rome, where she attended college classes in gemology from 2009-2011.

According to Christo Grozev, lead Russia investigator with Bellingcat, “Maria Adela” took numerous two-and-a-half-day train trips from Moscow to Paris via Belarus. Grozev says the passport “Maria” traveled on during these trips was issued in August 2011 and had a number that was only a few digits away from one used by a senior officer in GRU’s black-ops unit 29155, Sergey Fedotov.

In the fall of 2011, “Maria” registered a jewelry trademark in France under the brand name Serein. According to investigators, all of these activities were likely a “seeding phase” of a long-term plan by GRU to deploy “Maria” as a self-sufficient businesswoman, ultimately gaining access to the social circles of NATO leadership.

In 2012, “Maria” married a man who she told her friends was Italian. In reality, investigators say the unnamed man was born in Moscow and held Ecuadorian and Russian citizenship, in addition to a fake Italian passport.

In an intriguing turn with a story that seems torn from the pages of a spy thriller, in July 2013, “Maria’s” 30-year-old husband died in Moscow from “double pneumonia and systemic Lupus.” Without directly speculating, Grozev noted, “Systemic Lupus is a connective tissue disease of unknown causes which, according to medical literature, is rare among young men].”

Now a widow, in early 2013, investigators say “Maria Adela” registered a jewelry company in Italy, Serein SRL. No later than October 2015, journalists say the Russian spy moved to the upscale Posillipo district on the Gulf of Naples.

At this time, investigators say her career as a covert GRU operative “peaked.”

From 2015 to 2018, investigators say “Maria Adela” became a fixture in Naples social scene, opening up a jewelry boutique, “later turning it into a trendy club frequented by the local highlife.”

In 2016, “Maria” held a launch party for her “Serein Concept Gallery,” which a local newspaper reported as being attended “by over two hundred friends,” including Naples city councilors Alessandra Clemente and Alessandro Lukacs. The newspaper article identifies ” Maria ” as “Adela Khufeldt.”

Investigators say that a quick reverse image search of “Maria’s” supposed “custom” jewelry, touted as being made in Naples, reveals the pieces to match inexpensive costume jewelry available for purchase from Chinese online wholesalers.

Nevertheless, in 2015, journalists say that the Russian spy became an active member and secretary of the local Lions Club Napoli Monte Nuovo, initially established in 2008 by a Naples-based German NATO officer.

Through her affiliation with the Lions Club, investigators say that “Maria” was able to interact and become friends with many NATO officials stationed at Allied Joint Force Command Naples. One NATO official who spoke with journalists on the condition of anonymity even admitted to having a “brief romantic relationship with Maria Adela.”

Colonel Shelia Bryant (Ret) told journalists that she and her husband had been friends with “Maria” when the now-retired U.S. Army officer was stationed at Naples as the Inspector General for the U.S. Naval Forces in Europe and Africa.

Bryant admitted to finding “Maria’s” back story “confusing and unconvincing” and being suspicious of her hard-to-explain continuous source of income. “She opened a store and frequently moved apartments in affluent parts of town with no credible income streams,” Bryant was quoted.

Bryant told reporters that she and her husband “contained their communication with “Maria Adela” to social interaction, trying to help her through what appeared to be emotional issues with men.”

Bryant, who unsuccessfully ran for Congress in 2018, said she recalled that “Maria” also socially interacted with American, Belgian, Italian, and German NATO staff and officers.

Journalists say “Maria” definitely had direct personal contact with many NATO and U.S. Navy officers stationed in southern Italy. However, it is unknown if she ever gained physical access to the Naples NATO base.

Digital breadcrumbs and witnesses’ accounts revealed that “Maria” had attended numerous events organized by NATO or the U.S. military, including NATO annual balls, various fund-raising dinners, and the annual US Marine Corps balls.

In addition to circling the waters around NATO officials in Italy, investigators said the Russian spy made numerous trips to Bahrain under the guise of attending luxury goods and jewelry expos.

Successfully inserting herself into the inner circles of top NATO officials, “Maria’s” days as an undercover Russian spy abruptly ended in the fall of 2018. Apparently, thanks to the same investigators who would later reveal her to be a covert GRU operative.

September 14, 2018, Bellingcat and its Russian investigative partner, The Insider, published an explosive expose revealing the identities of the GRU operatives who were implicated in the Novichok poisoning of Sergey and Yuia Skripal in Salisbury, England.

Critically, Bellingcat and The Insider also exposed a massive GRU counterintelligence failure in that agency had been issuing consecutively numbered passports to its undercover spies. This meant that investigative journalists, foreign security agencies, or anyone for that matter, could acquire data frequently leaked onto Russia’s black market to uncover other embedded spies.

Suddenly, all of Russia’s covert operatives were in danger of being outed or apprehended by local authorities.

Investigators say the following day, September 15, 2018, “Maria Rivera” boarded a one-way flight from Naples, Italy, to Moscow, using a third Russian passport with a passport number from the GRU-assigned batches. According to journalists, Russian border records show the only item “Maria” brought home from her decade as an undercover spy was a black cat named “Luisa.”

Two months after returning to Moscow, under an account using the name “Adela Serein,” the erstwhile spy made a Facebook post ambiguously suggesting she had cancer, saying, “Hair is growing now after chemo, short but there… Missing everything but trying to breathe. At least learn to do it…”

Three years after disappearing from Naples, investigators say the GRU operative also sent a cryptic text message to Marcelle D’Argy Smith, the former editor of the U.K. edition of Cosmopolitan magazine, who became close friends with “Maria Adela” in Malta in the summer of 2010.

“Dearest dearest Marcelle! There are [a] lot of things which I can’t (and never be able) to explain! But missing you a lot and very very much…”

Further confirming the spy’s real identity, investigators said the profile picture used by Kolobova on WhatsApp was identical to an image posted on Facebook and Instagram by “Maria Adela.”

Digging into the GRU spy’s background, journalists found out that Kolobova was the daughter of a retired Colonel in the Russian Armed Forces and former Head of the Military Faculty at the Urals University in Ekaterinburg. A detail that fits with GRU’s pattern of recruiting children of high-ranking military officers into the agency.

It remains unknown how much sensitive NATO information Kolobova may have gained access to during her decade undercover as “Maria Adela.”

Investigators said they found no evidence that Western counterintelligence services or NATO security services knew that a Russian spy had been mingling among high-ranking officials at a NATO Joint Force Command Center for at least several years.

A U.S. counterintelligence official, speaking under a condition of anonymity, told The Debrief that, unfortunately, they weren’t surprised to hear that a GRU operative was able to successfully infiltrate NATO command circles and go undetected.

“Still, these types of operations are among the most difficult to detect and are purpose-built for evading the very best counterintelligence programs in the world.”

“They will work for as long as it takes to unravel every facet of this operation and anyone who had even inadvertent contact with it.”

The Debrief reached out to the NATO press office for comment but had not received a response by the time of publication.