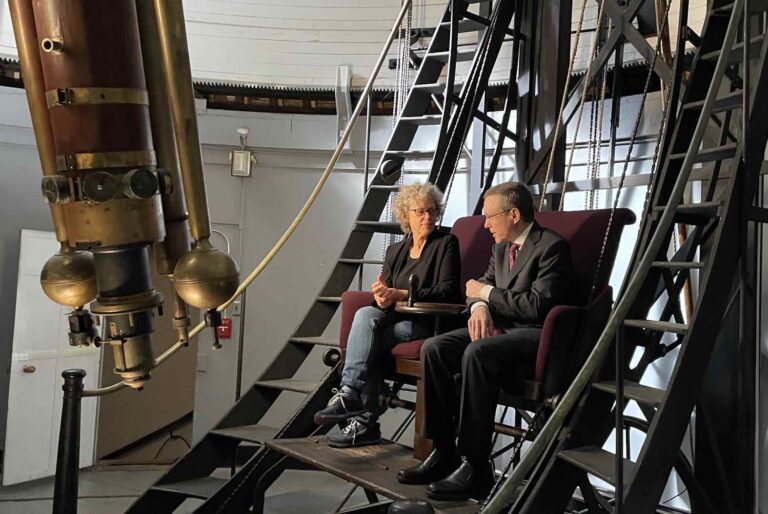 The Silence of Snow

“I love the sound of rain”, noted the investigative journalist and author, Leslie Kean, as drops of water were tapping on the dome of the Great Refractor telescope at the Harvard College Observatory.

My reply was poetic. “It’s even better when it snows. There is soft silence and then you open the door to a completely new reality. Similar to the experience we might have with extraterrestrials.” Leslie and I were there for a lengthy conversation on the subject of, you guessed it, everything extraterrestrial. Below are a few highlights of some of the points I brought up in our conversation.

There are two general categories of interstellar objects that we might find in the solar system. One is space trash, like our Voyager spacecraft would look like in interstellar space within a billion years: worn out, defunct, but still a feeble monument for our technological civilization. The second category involves functioning devices with artificial intelligence (AI), which I like to call “AI astronauts”, seeking information and reflecting the blueprint of their senders.

One would naively expect many more defunct objects than functional objects and many more small ones than big ones. But this is not always our experience when walking through a forest and exploring what nature has in store. Self-replicating spacecraft might prove to be the most abundant objects, and their size will be dictated by the machinery they employ to replicate – just like biological creations.

The way to find out the cosmic reality we live in is to look up. The philosophers who placed Galileo Galilei on house arrest and would have canceled him today on social media could have never designed a space mission that would reach Mars because they “knew”, without looking, that the Earth is at the center of the Universe.

In celebration of Galileo’s insight, I am leading the Galileo Project. This Project avoids the strategic mistake of knowing the answer in advance, by using telescopes to collect new scientific evidence on anomalous interstellar objects–like `Oumuamua, or Unidentified Aerial Phenomena (UAP)–like those mentioned in the report of the Office of the Director of National Intelligence (ODNI) to Congress. The ultimate goal of the Galileo Project is to eliminate the term UAP from our lexicon by clarifying the nature of all objects we see in the sky. The Project is agnostic about the outcome. If all anomalous objects happen to be of natural origin, like birds, meteors, and atmospheric phenomena; or if they happen to be human-made, like drones, weather balloons, airplanes, or satellites; so be it. No matter what the Project finds, it will serve society by clarifying the fog and allowing the conversation to advance based on new scientific knowledge.

But there is another possibility. If even one object is found to come “extraterrestrially” – the word used by the DNI Avril Haines at the Ignatius Forum in the Washington National Cathedral on November 10, 2021 – this finding could have dramatic implications for humanity’s future. When I pointed out to Avril, who was sitting next to me at the Cathedral, that I do not like science fiction because the storyline often violates the laws of physics, she replied, “we have to work on you, Avi.”

Like any other scientific endeavor, the Galileo Project will interpret its data based on known physics. A behavior that cannot be explained by the standard model of physics, like that of dark matter and dark energy, would be doubly revolutionary. Not only will we know that there are smarter scientists in our cosmic neighborhood, but we will learn something new about the universe at large. The laws of physics apply everywhere in the cosmos, unlike the laws of our society.

The Galileo Project will assemble its first telescope system on the same roof of the Harvard College Observatory, where I spoke with Leslie. The telescope system will obtain a continuous video of the entire sky at infrared, visible, and radio wavelengths, accompanied by an audio recording. Our AI software will attempt to identify the nature of objects of interest. Once the system will operate satisfactorily, we will make copies of it and distribute them in many locations. Our agnostic scientific approach will report on any type of fish that will be caught by our “fishing net” of telescopes.

It is not mandatory for scientists to study objects in laboratories, in order to figure out their nature. For example, the Nobel Prizes in 2017 and 2020 were awarded for the study of black holes, even though we never examined a single black hole in our laboratories. So far, black holes were only explored remotely. This is all for a good reason. As I pointed out to a kindergarten class in my role as the founding director of Harvard’s Black Hole Initiative – it is risky to get too close to black holes.

Over the past four decades, the mainstream research community in astronomy and physics had been engaged in the search for the nature of dark matter, an invisible substance that makes up most of the matter in the universe. So far, we did not discover any dark matter particles, even after investing billions of dollars in constructing numerous fishing nets of sophisticated detectors. The search for the nature of anomalous objects in the sky could carry broader consequences for our future. Yet, it is currently omitted in federal funding channels for astronomy and physics, even as the US government is about to allocate funds to a new UAP office that will coordinate data assembly and analysis starting in June 2022. This funding landscape might change if we find a vehicle propelled by dark matter as its fuel.

Knowledge about extraterrestrial matters does not adhere to national borders and should not be regarded as a matter of natural security. Like all things scientific, such knowledge should be shared openly with all humans. The more we know about our cosmic neighborhood, the more responsibly we will act in adapting to it.

Humans tend to believe in virtual realities that flatter their ego, like the philosopher’s notion that the Universe centers on us. This was the notion that my daughters adopted before they left home. Science allows us to advance our knowledge based on reproducible results that are collected by instruments, independently of our wishful thinking.

Leslie wished me success in raising the tens of millions of dollars needed to accomplish the goals of the Galileo Project. The Project breaks new ground in assembling open data and analyzing it in a transparent way, unlike classified government reports. The Project also serves an important educational purpose about the scientific method, by being open-minded and allowing for the possibility of extraterrestrial equipment to be out there without the stigma or ridicule that would exclude finding it.

We should keep in mind that quantum mechanics was revealed by surprising experiments a century ago, and Albert Einstein had difficulties interpreting it. Now, the common knowledge of quantum reality serves as the foundation for our most sophisticated gadgets. Nature is more imaginative than we are. And the history of science suggests that we stay humble in exploring reality, which surprises “experts” on occasion. We must therefore use evidence and childhood curiosity, not our adulthood ego, as the flashlight that would free us from the darkness of our ignorance.

Here’s hoping that we will open the door to the soft silence of a new reality, shaped by indisputable evidence. What this reality entails, remains to be seen… through our telescopes.