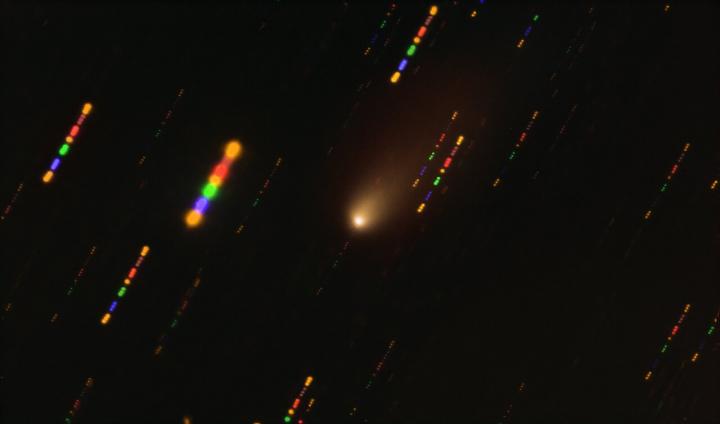 Second Interstellar Visitor Borisov Is The Most Pristine Comet Ever Observed

New research released today suggests the second interstellar object ever detected, 2I/Borisov, was likely the most pristine comet ever observed.

Based on observations made using the European Southern Observatory’s Very Large Telescope (VLT), a team of astronomers now believe Borisov never passed close to any star before flying by our Sun in 2019, making the comet a perfect relic of its cosmic past.

“2I/Borisov could represent the first truly pristine comet ever observed,” said Dr. Stefano Bagnulo of the Armagh Observatory and Planetarium in a release. Dr. Bagnulo led the new study published today in the journal of Nature Communications.

Unlike ‘Oumuamua, whose origin is still a matter of debate, Borisov was unmistakably a rogue comet, with a comet tail measuring to be 14 times the Earth’s size. Yale astronomer Pieter van Dokkum said of the nearly 100,000-mile-long tail, “It’s humbling to realize how small Earth is next to this visitor from another solar system.”

As sunlight passes through cometary material, it becomes polarised. By examining the polarized light’s properties, researchers can glean valuable insights into a comet’s mechanics and chemistry. Researchers found that Borisov’s polarimetric properties were distinct from all other observed comets, except Hale-Bopp.

After its discovery in 1995, Hale-Bopp generated considerable public attention, thanks mainly to the comet being easily observable to the naked eye. In 1997, 39 members of a UFO religious cult called Heaven’s Gate committed ritual mass suicide, believing their deaths would allow them to teleport to an extraterrestrial space ship they thought was following behind Hale-Bopp.

Until recently, Hale-Bopp was considered to be the most pristine comet ever seen by astronomers. Researchers believe before passing through in the late 1990s, Hale-Bopp had only passed by our Sun once before, allowing it to be barely affected by solar wind and radiation.

By examining the polarisation and the comet’s color, researchers say they have now concluded that Borisov is even more pristine than Hale-Bopp. Before its pass by our Sun, the interstellar visitor had likely never come close to another star.

Having never been affected by a nearby celestial body, researchers say Borisov carried with it unblemished signatures of the cloud of gas and dust from which it was formed.

“The fact that the two comets are remarkably similar suggests that the environment in which 2I/Borisov originated is not so different in composition from the environment in the early Solar System,” said Alberto Cellino, a co-author of the study, from the Astrophysical Observatory of Torino, National Institute for Astrophysics (INAF), Italy.

Examining dust grains surrounding the comet’s main body, a team of researchers led by Dr. Bin Yang, an astronomer at ESO in Chile, said they discovered relative amounts of carbon monoxide and water in Borisov that drastically changed as it neared the Sun.

Researchers say the results suggest that Borisov is comprised of materials formed from different places within its interstellar home planetary system. Yang and her team say the mix of matter in Borisov suggests the comet’s planetary home may contain giant exoplanets, whose strong gravity stirs material in the system. Astronomers believe that a similar process occurred when our own Solar System was formed 4.5 billion years ago.

Researchers hope the European Space Agency’s upcoming “Comet Intercepter” mission will offer opportunities for further detailed study of rogue interstellar comets in the near future. Referring to the upcoming mission, “ESA is planning to launch Comet Interceptor in 2029, which will have the capability of reaching another visiting interstellar object if one on a suitable trajectory is discovered,” said Dr. Bagnulo.