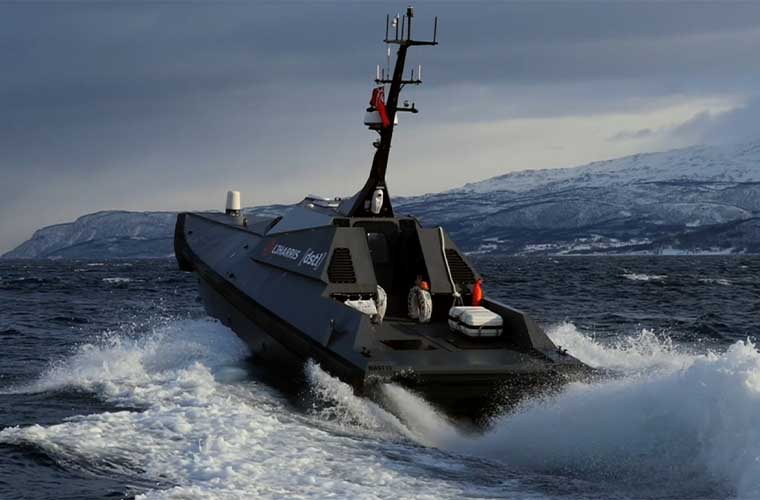 The Royal Navy recently announced a brand new autonomous surface vessel, the Madfox, is in the hands of the U.K.’s NavyX and will soon be entering the naval fleet.

Formally named the Maritime Demonstrator For Operational eXperimentation (MADFOX), the ship is manufactured by American defense company L3Harris, and based on the company’s MAST-13 series of Unmanned Surface Vessels (USV).

Once fully operational, the Madfox will become the U.K.’s first autonomous surface vessel, keeping pace with naval technological advances by potential adversaries, such as China, in addition to allies, such as the United States.

“The development of unmanned technology is vital for success in modern warfare, going beyond the capability of traditional ships to attack and defend in uncertain environments,” said U.K.’s Secretary of State for Defence, Ben Wallace.

The recent announcement comes after over 18 months of sea trials of L3Harris’ MAST-13 vessel by the U.K.’s Defense Science and Technology Laboratory (Dstl).

Hosted in Norway, “Exercise Cold Response” tested NATO allies’ ability to operate together in extreme cold weather conditions, with temperatures rarely getting above -17 Celsius, or 0 degrees Fahrenheit. More than 15,000 soldiers from the U.S., U.K., Netherlands, Germany, France, Belgium, Denmark, Sweden, and Norway participated in the exercises that ran from March 9-18, 2020.

During Cold Response, the HMS Albion integrated the MAST -13’s “ASView” control system and remote piloting system. According to L3Harris, the MAST-13 worked alongside the warship, completing 22 crewed tasks and an unspecified number of autonomous uncrewed tests. The Madfox also completed several other taskings entirely in unmanned mode via the Maritime Autonomous Platform Exploitation (MAPLE) integrated command and control system.

After successfully passing initial sea trials, the MAST-13, renamed Madfox, has now been delivered to the Royal Navy’s new autonomy and lethality accelerator – NavyX. According to the Royal Navy, NavyX aims to get innovative and emerging technology into operations “at a pace that has not been possible before.”

Madfox’s delivery comes just a week after the U.K. Ministry of Defense announced a significant shakeup in defense strategy, emphasizing expanding rapid reaction capabilities, cyberwarfare, A.I., and the use of robotic and autonomous systems.

Carrying over the capabilities of the MAST-13, the Madfox can engage in fully-autonomous operations, with a remote operator maintaining full situational awareness via an onboard sensor package.

The Madfox will also be equipped with L3Harris’ WESCAM MX-10MS, an electro-optic/infra-red (EO/IR) sensor that provides high-quality imagery and detection identification and recognition sensors for the autonomous vessel and remote operators.

Not designed to carry any onboard weapons systems, the Madfox’s current role will be for surveillance and reconnaissance operations.

Also capable of navigating without human intervention, Madfox is unique to other uncrewed surface vessels – such as the U.S.’s Ghost Fleet Overlord – in that it is designed to operate autonomously at high speeds. According to L3Harris, avoidance algorithms allow Madfox to negotiate crowded waterways in compliance with internationally mandated collision regulations.

The Madfox will undergo a year of testing with NavyX before being declared fully operational and entering regular service.

In a press release, Commander Antony Crabb, NavyX team leader, said: “With Madfox now directly in the hands of NavyX, the team will be able to explore a multitude of issues such as safety, regulatory compliance, new missions, new payloads, and the role that a USV can play in complex operations and within the future fleet.