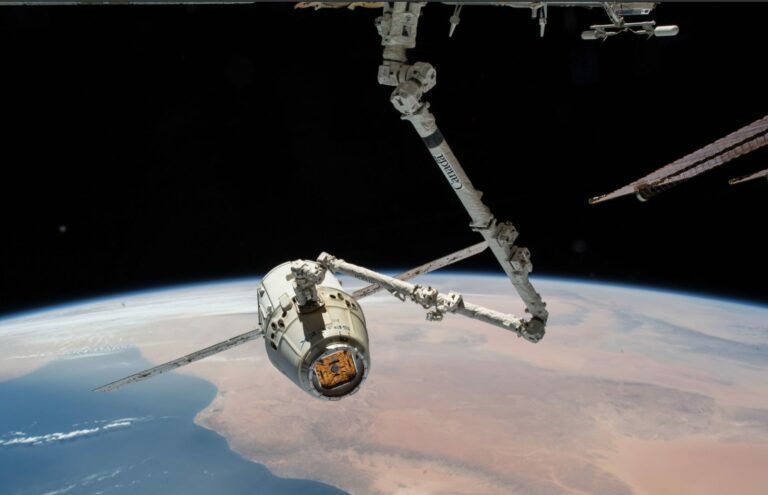 An object identified as orbital debris or “space junk” recently struck the Canadian-operated robotic arm on the International Space Station, according to officials with the Canadian Space Agency.

Although the space junk involved in the collision incident did cause damage to the Canadian Space Agency’s Canadarm2, it appears to be minimal, and will not be a hinderance to the mechanical arm’s operations.

The hole produced by the impact was first noticed during an inspection scheduled on May 12.

According to the agency’s blog post, “The damage is limited to a small section of the arm boom and thermal blanket,” which they say resulted in a hole approximately 5mm in diameter that they called a “lucky strike.”

CSA officials say that the performance of the Canadarm2 will be monitored in the days ahead to ensure that no issues resulted from the impact.

In recent months, space junk in Earth orbit has become a problem that space agencies like CSA and NASA have put more attention toward, despite having remained an issue now for decades. With the recent efforts by commercial space companies like SpaceX to increase the number of satellites in Earth’s orbit with its Starlink constellation, the potential of collisions in space is greater than at any time before.

An incident in April that involved a near-collision between the International Space Station and suspected orbital debris resulted in four astronauts who had just arrived at the space station being asked to don their space suits again and brace for possible impact. Fortunately, the incident turned out to be a false alarm.

“The rising population of space debris increases the potential danger to all space vehicles,” says NASA’s page related to tracking and mitigating threats from space debris, adding that such concerns apply “especially to the International Space Station, space shuttles and other spacecraft with humans aboard.” The space agency adds that it takes the threat posed by collisions with space debris seriously, and has “a long-standing set of guidelines on how to deal with each potential collision threat.”

In addition to orbital debris of human origin, other threats may stem from natural objects such as micrometeorites, which despite their small size, have managed to cause damage to some NASA spacecraft in the past.

According to the United States Space Surveillance Network, there are nearly 23,000 objects in space that are larger than a softball which are currently being tracked. In the event that an object is suspected of being on a collision course with the International Space Station, the crew can be notified, and the spacecraft can even be repositioned in some instances to avoid impact with the space junk.

The CSA says the recent damage to the Canadarm2 should not prevent its robotic hand, called Dextre, from completing a forthcoming operation that is scheduled to replace the space station’s Remote Power Control module.