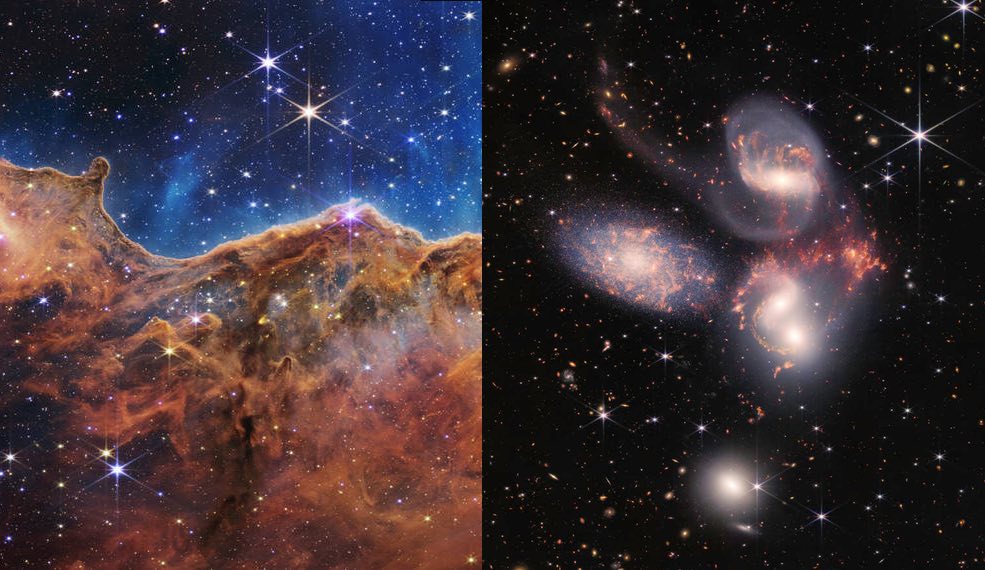 The first complete set of images captured by NASA’s James Webb Space Telescope, “the world’s largest and most powerful space telescope,” was revealed by NASA this morning, setting the pace for future exploration efforts of the distant universe, and its early beginnings.

The historic images were revealed in a public debut Tuesday morning held at NASA’s Goddard Space Flight Center in Greenbelt, Maryland. The event followed a surprise unveiling of one of the images by President Joe Biden at the White House Monday afternoon. The images were also made available for download on NASA’s website.

“We’re seeing them as they looked back in time,” Rigby said, adding that the Webb images provide “a sharpness and clarity we never had.”

The imagery revealed Tuesday morning was accompanied by spectrographic data about distant planets which included the transit of an exoplanet, WASP 96b, as it passed before a star.

The resulting wavelengths of light observed by Webb included features likened to “bumps and wiggles” by NASA exoplanet scientist Nicole Cologne, who explained that these indicated the presence of water vapor in the exoplanet’s atmosphere.

The third image from the collection depicted a near-infrared image of a planetary nebula, caused by a dying star that has expelled a large amount of its mass. The strikingly colorful image resulted in part from the production of hydrocarbon structures detected by Webb’s powerful imaging systems.

“Two cameras aboard Webb captured the latest image of this planetary nebula, cataloged as NGC 3132, and known informally as the Southern Ring Nebula,” a NASA statement read. “It is approximately 2,500 light-years away.”

“The brighter star in both images hasn’t yet shed its layers,” according to the NASA informational statement on the nebula images, adding that the star visible in the frame “closely orbits the dimmer white dwarf, helping to distribute what it’s ejected.”

The fourth image captured by Webb, called “Stephan’s Quintet”, depicts a grouping of galaxies famous for their depiction in the classic Christmas movie “It’s a Wonderful Life.” The image, currently Webb’s largest image captured to date, is estimated to contain more than 150 million pixels and was assembled from the capture of nearly 1000 separate image files.

The final Webb image revealed during Tuesday’s event depicts the stunning Carina Nebula, described by the American space agency as a “billowing cloud of cold interstellar gas and dust rising from a tempestuous stellar nursery.”

“It just reminds me,” Straughn said during the presentation, “that our sun, and our planets–and ultimately us–were formed out of the same stuff that we see here.

“We humans really are connected to the universe,” Straughn said.

One of the most ambitious scientific endeavors in modern history, Webb represents the most advanced scientific observatory ever placed into orbit by humans. It was launched on December 25, 2021, at 7:20 a.m. EST (1220 GMT) from the Guiana Space Centre in Kourou, French Guiana, carried aboard a European Space Agency Ariane 5 rocket.

The telescope is equipped with four state-of-the-art instruments, which allow it to view objects in our solar system at incredible distances, which includes some of the oldest galaxies in our universe. Until recently, instrumentation on board the Webb Space Telescope was still undergoing testing and commissioning. However, during Tuesday morning’s coverage, Webb Project Manage Bill Ochs said that over the weekend all commissioning activity has now been completed.

“We are officially done with commissioning,” Ochs said. “We have an observatory that is in excellent shape, that either meets or exceeds requirements.” Ochs also noted that current fuel reserves on board the telescope could last for up to two decades.

“We have twenty-plus years of fuel on board,” Ochs said, announcing that the first year in operations for Webb is now officially underway.

For it to maintain functionality, The James Webb Space Telescope and its primary scientific instruments must maintain extremely cool temperatures, which allows them to be receptive to measurements of heat signatures from objects it views in space. Webb’s predecessor, the Hubble Space Telescope, was able to operate in low Earth orbit for its observations, which is far too close to both Earth and the moon, heat from which would cause problems for Webb’s more sensitive instrumentation.

Although Webb has enhanced capabilities that far exceed its predecessor, the two telescopes will continue to perform overlapping missions of viewing different spectra in the universe.

Because of its distance from Earth, Webb will not be capable of regular servicing like Hubble has seen over the years, and with its current fuel stores, the telescope is expected to be capable of maintaining operations for at least a decade. If any of Webb’s delicate science instruments are damaged or encounter problems, the telescope is fitted with backup systems that include identical components within its Near Infrared Camera that will allow engineers to enable it for continuous operation, even at its great distance from Earth.

“It maintains our ability to propel us forward, for science, for risk taking, for inspiration. And we don’t wanna ever stop exploring the heavens, nor stop daring to take another step forward for humanity.”

“Somewhere something incredible is waiting to be known,” Nelson said, quoting the famous words of the late astronomer Carl Sagan.

“I think those words are becoming reality,” Nelson said.