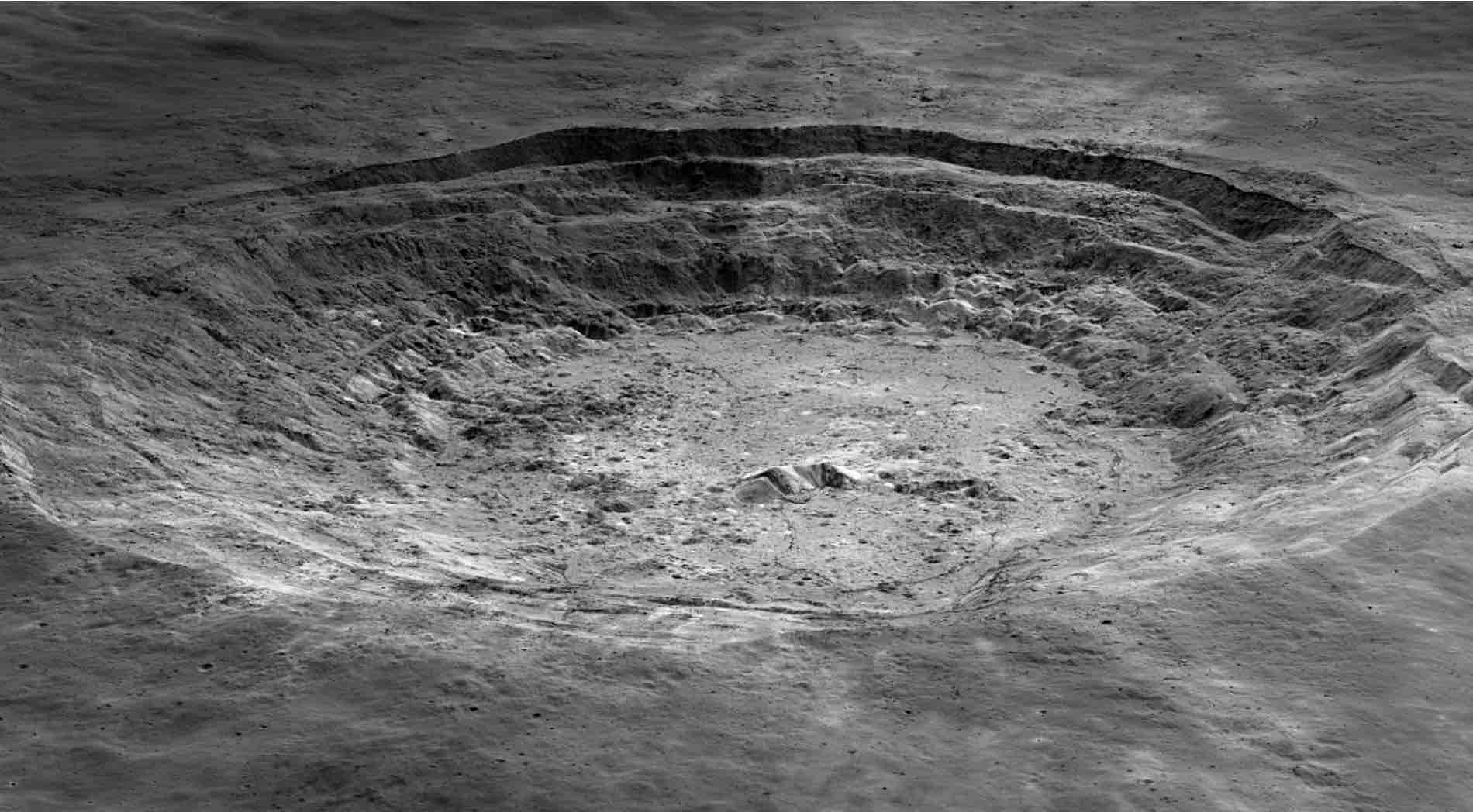 The Aristarchus Anomaly: What China Found on the Moon Could Help Solve a Centuries-Old Mystery

In June, China announced the detection of high-pressure minerals in regolith samples recovered by its Chang’e-5 lunar exploration mission, evidence that points to impact ejecta near craters where the probe collected its samples.

As China’s first sample-return mission and its fifth lunar exploration effort, the minerals detected by the Chang’e-5 mission are helping scientists determine the origins of impact features on the Moon. According to the state-run Global Times, researchers with the Institute of Geochemistry Chinese Academy of Sciences detected fragments of two minerals—stishovite and seifertite—in samples collected.

“This marks the first time for seifertite to be found in the samples from outside the Earth,” the Times reported, adding that silicon dioxide and silica glass were also found in the samples. Based on heat and pressure application that simulated conditions of an impact, the scientists were able to narrow down the likely source of the silicon dioxide debris to one of Chang’e-5’s most interesting sampling areas: the Aristarchus crater.

One of the brightest features visible on the lunar surface, the Aristarchus crater exists on the northwesternmost portion of the Moon’s Earth-facing side. Comprising an impact feature that is deeper than the Grand Canyon, this region has long been a target of astronomers for its high albedo—that is, the amount of light it reflects—which is close to double the brightness of other features visible on the Moon.

However, the Aristarchus crater is known for more than just its unusually high albedo. Since the early 19th century, astronomers have reported observations of peculiar flashes of light that periodically emanate from near the center of the large impact feature, the source of which has long remained a mystery.

The Aristarchus Anomaly: A Brief History of aN Astronomical PuzzlE

In 1836, Captain W. Smyth published a letter in Monthly Notices of the Royal Astronomical Society where he told of seeing “a light, resembling that of a star of the 9th or 10th magnitude,” which he said, “appeared by glimpses, but at times was brilliant, and visible for several seconds together.” In his letter, Smyth remarked that “there can be no doubt of its being the identical spot mentioned by Cassini, Sir W. Herschel, and Captain Kater; and also that described by Dr. Maskelyne,” noting similar earlier observations dating back more than a century earlier.

Sightings of anomalous luminosity around or from within the Aristarchus crater have occurred in more recent times, also. In an account detailed by Ron Emanuel in the November 1965 edition of Understanding, the author noted observations of a single bright point of light, likened in appearance to a star, that seemed to originate from the center of the crater.

So what is the source of the unusual, “star-like” luminosity that so many astronomers have spotted while peering through telescopes at the Aristarchus crater?

When an impact occurs on the Moon, the peaks of craters are formed as the lunar crust rebounds following the immense pressures that such events produce. “The energies of impacts are so high that rocks no longer behave as brittle solids,” according to data included with a 2010 NASA Image Feature on the website of the Lunar Reconnaissance Orbiter, “but rather as deformable plastic.” This almost fluid-like behavior of the Moon’s crust causes the bottom of the crater to rebound, driving up material from deep below the surface and forming the central peak present within many lunar craters.

According to NASA, “In the case of Aristarchus crater, the central peak contains rocks with three very different albedos. As these materials erode out of the central peak they slide downslope, creating contrasting stripes.”

“The highest albedo material reflects about four times as much light as the lowest albedo rocks,” the NASA FAQ page says, describing conditions that very likely can account for the appearance of a much brighter region within the Aristarchus crater that, under the right conditions, might even appear to be star-like in its bright appearance.

And as it turns out, some of the mineralogical data collected by the Chinese Chang’e-5 mission may be able to offer additional insights into the phenomenon behind the centuries-old Aristarchus anomaly.

New Perspectives On a Centuries-Old Mystery

According to the NASA data, “The high albedo material is most likely a common lunar rock type, anorthosite,” a material that is already known to form most of the lighter areas of the lunar crust, while darker areas are formed from basaltic material.

“On the other hand,” the article suggests, “perhaps we are seeing a more silicic rock akin to granite? Such silica-rich rocks are known to form on the Moon, we just do not know much about their origin and locations.”

Intriguingly, in the recent samples collected by China’s Chang’e-5 probe, “it was determined that the silicon dioxide debris may have come from the Aristarchus impact crater in the Chang ‘e-5 sampling area,” the Global Times reported. Based on the likelihood that the silicon dioxide debris recovered by the Chinese probe has its origins from within the Aristarchus crater, it would appear to lend weight to NASA’s previous speculations about the presence of silicic rock accounting for some of the high albedo observed in the center of the crater.

Another clue regarding the conditions that may give rise to the peculiar light effects of the Aristarchus crater involves the central uplift area within the crater, where much of the higher albedo material is exposed. When sunlight strikes these lighter areas—which, as has been suggested, may be rich in both bright silica-rich rocks and minerals, as well as darker (but potentially reflective) pyroclastic glasses—the effect under proper conditions might indeed produce what resembles a bright flash of light from the center of the crater.

Although humans have yet to visit Aristarchus during manned Moon missions, the prominent crater was considered as a possible landing site during the Apollo era, and the same would no doubt hold true for future missions to Earth’s natural satellite. Fortunately, learning about the unique geology of the crater may not require astronauts to have to actually climb the massive central peak of the crater to learn more about this unique region of the lunar surface.

“Future astronauts exploring Aristarchus crater could easily sample materials from the highest point of the central peak without actually having to climb to the summit,” reads a NASA FAQ page. Rather, astronauts on such missions “will simply browse the samples delivered to the base!”

Interestingly, the Aristarchus crater is host to more than one unusual luminous phenomenon that astronomers have observed over the years. There are also several recorded observations of an odd, reddish haze or glow that astronomers have witnessed around the crater. One such instance occurred on October 13th, 1959, as astronomer E.H. Rowe was observing the moon at approximately 7 PM from near Devon, UK.

“While observing the Moon with a 36-inch telescope my attention was directed to the crater Aristarchus,” Rowe said, describing a flash of light he said was “brilliantly white in color.” However, following his sighting of the bright flash, Rowe observed something even more spectacular.

“I was surprised to see a delicate yet bright reddish-amber glow in or near Aristarchus clearly outlined against the white background,” Rowe later wrote of his observation. “It was visible for only a few seconds. After it disappeared no trace remained to show it had been there.”

Rowe was not the last observer who would describe seeing red or amber-colored lights appear near the Aristarchus crater. Just four years later, clusters of red lights were observed by astronomers at the Lowell Observatory between October 29 and November 27 over the nearby Herodotus crater, followed by a series of reddish spots observed “clustered in an oval formation along the south rim of the crater Aristarchus” on the evening of November 27.

The following month, a similar observation was made by astronomer T. Sato at the Rakurakuen Planetarium in Hiroshima, Japan. Sato’s observation followed a similar observation by seven astronomers who similarly described seeing a pinkish haze over the southern edge of Aristarchus, which they said began to drift in the direction of the Herodotus crater. Then, less than a year later, Saul Genatt, at the time the station manager of the on-site optical research facility at Goddard Space Flight Center, along with an electronic technician named Edwin Reid, observed similar bands of colored light that appeared over Aristarchus.

“Mr.Genatt said that through a 16-inch telescope they saw two distinct reddish bands over the southern part of the crater and a bluish band over the northern part,” read an account of their observations in the November 1965 edition of Understanding. “The bands were roughly parallel and the reddish bands were of equal thickness – about four or five miles. The longest reddish band was about 35 miles in length.”

“The colors were very prominent at first,” Genatt was quoted saying. “The reddish bands were really red and the other was quite blue. As time passed the intensity of the colors weakened.”

The cause behind these peculiar, colorful observations likely also has their source in the unique mineral content of the Aristarchus crater. “The area has long been known to be among the reddest spots on the Moon,” reads a FAQ page with data about the Lunar Reconnaissance Orbiter Camera (LROC), “meaning its reflectance strongly increases from short to long wavelengths.” Wide Angle Camera (WAC) images obtained by the LROC have offered excellent color images in recent years featuring this red-hued region of the crater, which, like the crater’s highly reflective central peak, “is largely blanketed by the glass-rich products of explosive volcanic eruptions.” (Editor’s Note: For another possible explanation of these and other transient lunar phenomena, or TLPs, see this FAQ page made available at the website of Columbia University which proposes lunar outgassing as another possible mechanism for such events).

While the Moon certainly keeps a few mysteries that will serve as fodder for future explorations—both of the manned variety, and those carried out remotely—it seems that our expanding knowledge of lunar geology is helping us close in on the peculiar Aristarchus anomalies, which have captured the imaginations of curious astronomers now for centuries.