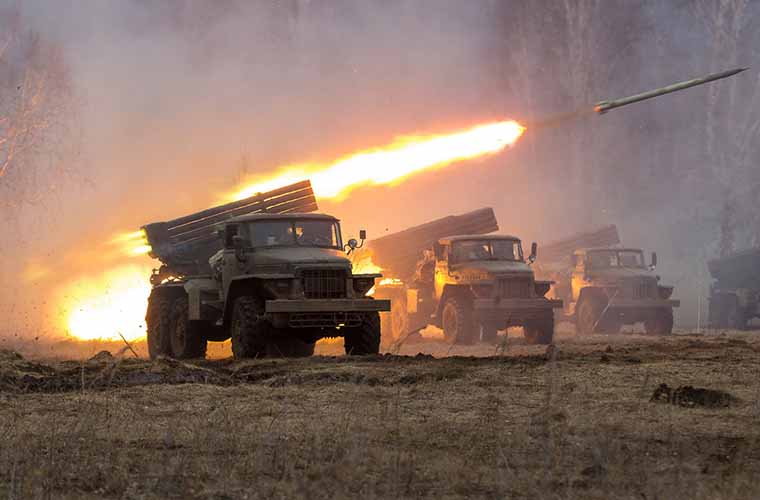 The Battle For Donbas Has Begun. Here’s What To Expect

“It can now be stated that Russian troops have begun the battle for Donbas, for which they have been preparing for a long time. A very large part of the entire Russian army is now focused on this offensive,” said Zelensky in an address.

Shortly after the President announced that the “Battle for Donbas” had begun, heavy shelling and airstrikes were reported along the nearly 300-mile semi-circle front, stretching from the Russian border north of Kharkiv to the southern port city of Kherson.

The Governor of Luhansk Oblast, Serhiy Haidai, said the situation was “Hell,” with constant fighting being reported throughout east Ukraine. According to the Ukrainian General Staff, Russia carried out strikes on over 300 targets overnight, primarily in eastern Ukraine.

Russia’s Defense Ministry also claimed forces had downed a Ukrainian MiG-29 fighter jet near Malinovka in the Donetsk region. The Ukrainian military has not confirmed the loss of one of its jets, and so far, no imagery has emerged to support Russia’s claim.

“No matter how many Russian soldiers are driven there, we will fight. We will defend ourselves. We will do it daily,” said President Zelensky about the battle for Donbas. “We will not give up anything Ukrainian, and we do not need what’s not ours.”

The Battle For Donbas : What Are Russia’s Goals?

By week four of the invasion, Ukrainian forces had decisively defeated Russia’s initial military campaign to force a regime change by rapidly seizing major Ukrainian cities, including the capital of Kyiv.

Following the failure to achieve its original military goals, Russia withdrew its forces from northern Ukraine, west of Kyiv, and the Chernihiv and Sumy Oblasts.

Subsequently, Russia has been concentrating reinforcements in the last few weeks- including newly-deployed units and damaged units withdrawn from northeastern Ukraine – to the Donbas region in preparation for a renewed offensive.

Acknowledging the start of a “new phase” in its “special military operation,” on April 19, the Russian Ministry of Defense said its primary goal was securing all of the Donetsk and Luhansk Oblasts. The Russian-backed breakaway states of the self-proclaimed Donetsk and Luhansk People’s Republics have already held large tracts of territory in these regions since 2014.

According to the U.S. Department of Defense, Russia has amassed 76 battalion tactical groups (BTG), composed of approximately 50,000 to 70,000 troops, in the Donbas region. Roughly 11 of those BTGs were added in the last several days, said a senior Defense Department official.

Standing in Russia’s way opposite the Donbas Line is the bulk of Ukraine’s conventional military forces, currently operating under the Joint Forces Operation (JFO) umbrella.

In contrast to its disastrous initial blitzkrieg, Russian military planners appear to be taking a more strategic approach to the battle for Donbas.

In the preceding weeks, Russian forces have been setting conditions to move southward along its northern axis, from the captured town of Izyum, and northward from several disjointed southern axes, east of the Dnieper River.

These movements suggest that Russia aims to link up its northern and southern axes to encircle Ukraine’s JFO forces rather than trying to take them head-on along a continuous eastern front.

As mentioned in an earlier article by The Debrief weighing in on Russia’s remaining options for success – by pursuing this strategic approach, Russian forces would forgo further attempts at seizing any major cities in exchange for defeating the bulk of the Ukrainian military in the field.

This strategy would be working on the 18th-century military precedent that a nation’s military is the true center of its power, not its cities.

What To Expect in the Battle For Donbas

Russia launching a renewed military campaign focused on the eastern Donbas region has long been a foregone conclusion. However, beginning a new large-scale offensive at this point in the war raises some questions.

Russian forces have captured the vast majority of the southern port city of Mariupol. However, Ukrainian troops are still holed up in the sprawling Azovstal Metallurgical Plant, continuing to fight and tie up Russian resources.

For nearly a week, the Russian Ministry of Defense has issued daily pleas for the Ukrainian troops still fighting in Mariupol to surrender, with promises of “the preservation of life.” In response, the remaining Ukrainian defenders have vowed they are “ready to fight to the last drop of blood.”

Currently, an estimated 12 battalion tactical groups are in Mariupol, still fighting to fully capture a city Russia has encircled and besieged for almost two months. Russia will likely need those 12 BTGs to be freed up to have the necessary combat power for a successful northward thrust in its Donbas offensive.

It is all but certain that Russia will eventually capture Mariupol. However, if Russia has to go in to clear out the remaining defenders, it could prove to be a very costly affair. The Azovstal Plant is one of the largest metallurgical factories in Europe and is essentially a city, complete with a vast network of underground tunnels.

If the city’s defenders make good on their vow, it’s uncertain what condition Russia’s southern forces will be in once Mariupol falls. Making Russia’s decision to launch the Donbas offensive before securing Mariupol somewhat curious.

Along the Kharkiv and Izyum axes, Russia is in a slightly better position in the north.

Since capturing Izyum in early April, Russia has been able to use the Valuyki-Kupyansk railway and P79 highway to reinforce its northern advance. The Ukrainian General Staff reports that Russia has permanently based two motorized infantry regiments and one armored regiment near Valuyki to protect its vital ground lines of communication running from Belgorod, Russia, to Izyum.

According to Ukrainian and Western intelligence statements, Russia is believed to have massed at least 22 BTGs (composed of roughly 15,000 to 20,000 troops) in the area of Izyum. If properly employed, a force this size could achieve a meaningful breakthrough, preventing Ukrainian troops from being able to withdraw to the northwest and completing one-half of the encirclement.

Of course, Ukrainian forces haven’t been sitting around simply waiting to absorb Russia’s next onslaught.

If Ukrainian forces can continue to press these counterattacks westward to recapture and hold Velykyi Burluk, roughly 20 miles from their current forward positions, it would cut off Russia’s lines of communication along the P79 highway. Russia would likely be forced to redeploy some of its units intended for the Izyum axis to protect its lines along the Valuyki-Kupyansk railway.

Perhaps the biggest question surrounding Russia’s decision to launch a new offensive in Donbas right now is the disposition of its forces in the east and along the Donbas line.

With the so-called Donetsk and Luhansk People’s Republics to their backs, Russia’s forces along the Donbas line have primarily spent the invasion fighting from behind relatively secure defensive positions. However, during this new offensive, Russian troops will now need to advance along the Donbas line to maintain continuity of contact to support an attempted encirclement of opposing Ukrainian forces.

Though the Russian forces deployed to the east are likely in better shape than those previously fighting around Kyiv or in the south in Mariupol, these troops have still been in constant combat for nearly two months. Reinforcements for these battle-weary troops have also been sparse.

Still, healthy troops previously fighting around Kyiv have likely been used to fill out units in the Donbas or refitted with soldiers from other damaged units to form piecemeal tactical groups in the east.

In the last few weeks, there have also been frequent reports of low morale and both conscript and contract soldiers refusing to fight or redeploy to join the battle in the east.

For all the reasons above, it seems unlikely that Russian forces took the operational pause necessary to properly reconstitute their forces before launching a new offensive in the Donbas.

Since announcing the start of a new offensive, Russia hasn’t made any significant progress along the Donbas line. Relying instead on heavy concentrations of long-range fires. This suggests this new phase could be a much slower and more grueling campaign than what was seen during the initial invasion.

Almost two months into its invasion, Russia still maintains an advantage in net combat power over Ukraine. However, for the Donbas offensive to succeed, Russia must effectively engage in multidivisional, multi-domain, combined arms warfare.

Something that, so far, Russian forces haven’t demonstrated.