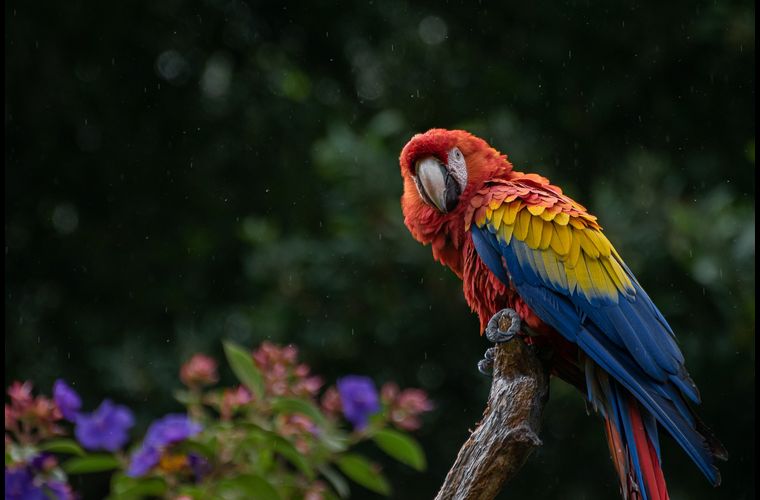 New research suggests that a parrot's large brain size may cause a long lifespan. (PC Pixabay.com)

Out of all the birds in the world, parrots are unique for their remarkable intelligence. From being able to talk to doing tricks or chores, parrots have become a society favorite. Parrots are also unique because they have a longer than average lifespan, sometimes living up to 30 years. In a new study, researchers from the Max Planck Institute of Animal Behavior (MPI-AB) wanted to see if a parrot’s brain size is related to longevity, and what that could mean for the species in the future.

Previous research has been inconclusive in linking lifespan and brain size in these birds, mainly due to a lack of subjects. “The problem has been sourcing good quality data,” explained a doctoral student at MPI-AB and the lead author, Simeon Smeele. “Comparative life-history studies require large sample sizes to provide certainty because many processes are at play at once, and this creates a lot of variation.” Studying 30 years of a parrot’s life takes a long time and a lot of data. The more birds studied; the more patterns begin to emerge. In order to get a bigger number of parrots for their research, the scientists collaborated with Species360.

Species360 is a non-profit NGO whose focus is on providing data needed to help with conservation. Their network includes over 1,200 aquaria, zoo, university, governmental, and research members within six continents and in 99 countries. Thanks to this network, Species360 has been able to create the Zoological Information Management System (ZIMS), which holds data on over 22,000 species. In working with Species360 and ZIMS, the researchers compiled data on over 130,000 parrots from over 1,000 zoos. Now that they had the data, the researchers were ready to test their hypotheses.

Looking at their data, the researchers posited two hypotheses. First, a bigger brain size allowed the parrots to better solve problems and survive longer. The second was that bigger brains took longer to grow, and required a longer lifespan. The researchers ran different models on the data to test each hypothesis. From their analysis, they found that the results suggested a combination of both theories was correct. Growing a bigger brain took longer, but it also helped increase the intelligence needed for survival. According to Smeele: “This supports the idea that in general, larger brains make species more flexible and allow them to live longer. For example, if they run out of their favorite food, they could learn something new and thus survive.”

Outlook: A Natural Variation in Lifespan

The data also revealed a surprising range in lifespan, from two years for fig parrots to 30 years for the scarlet macaw. “Living an average of 30 years is extremely rare in birds this size,” Smeele stated. “Some individuals have a maximum lifespan of over 80 years, which is a respectable age even for humans. These values are really spectacular if you consider that a human male weighs about 100 times more.” The researchers are continuing to look into both the variety and long lifespans that the parrots’ experience. They are hoping to see if sociality or learning may also play a role in longer lives. As Smeele explained: “Large-brained birds might spend more time socially learning foraging techniques that have been around for multiple generations. This increased learning period could potentially also explain the longer lifespans…”