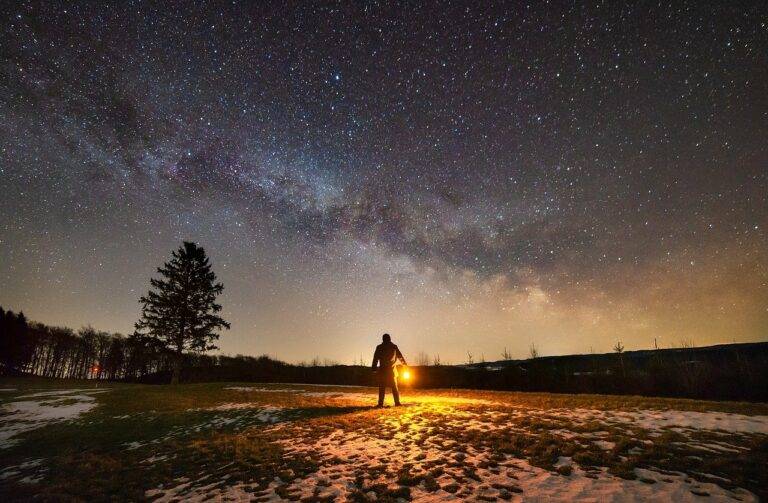 The Fermi Paradox: Where Are All The Aliens?

Throughout human history, our species has stared at the skies and asked, “Are we alone?” It is a question that has plagued philosophers and astronomers alike and one that still has no definitive universally agreed-upon answer.

In 1950, famed Italian physicist Enrico Fermi posed a new version of that same question. If the cosmos is essentially made up of the same raw materials found on Earth, and our home planet is so much younger than the universe itself (about 13.8 billion years old vs. about 4.2 billion years old), then where are all of the aliens?

By Fermi’s reasoning, if at least some of the billions and billions of stars in the sky had planets (which was still theoretical in Fermi’s day since the first exoplanet wasn’t discovered until 1992), then some of those planets must have or have had life. It stood to reason that those planets would eventually give rise to intelligent beings, societies, and technology. It happened on Earth, after all, and our planet is relatively young.

Civilizations hundreds of millions, if not billions of years, more advanced than us should have populated entire star systems by Fermi’s day. The evidence of that interplanetary expansion should be staring humanity in the proverbial face.

But it wasn’t, and arguably still isn’t.

There is still no concrete, universally agreed-upon evidence of advanced extraterrestrial life, regardless of the thousands of extrasolar planets identified in the last three decades and the billions-of-years head start any such life would have on us. It is a seemingly glaring contradiction, as Fermi first noted, and one that ultimately became named for him. It is now known as: “The Fermi Paradox.”

BACKGROUND: What is the Fermi Paradox?

Before actually putting his idea in print, Enrico Fermi died in 1954, meaning it wasn’t until 1975 when a paper entitled “An Explanation for the Absence of Extraterrestrials on Earth” appeared in the Royal Astronomical Society Quarterly Journal, laying out the paradox in significantly more detail.

“Are there intelligent beings elsewhere in our Galaxy?” the paper’s author Michael Hart wrote. “This is a question which astronomers are most frequently asked by laymen,” and he admitted, “is perhaps the most significant of all questions in astronomy.”

Like Fermi, Hart ultimately concluded that although more data was needed to make a definitive declaration, “We observe that no intelligent beings from outer space are now present on Earth. It is suggested that this fact can best be explained by the hypothesis that there are no other advanced civilizations in our galaxy.”

ANALYSIS: “Where [the Hell] is Everybody?”

When explaining the Fermi Paradox in 2018, famed SETI scientist Seth Shostak went a little deeper, writing, “Fermi grasped that any civilization with a modest amount of rocket technology and an immodest amount of imperial incentive could rapidly colonize the entire Galaxy. Within a few tens of millions of years, every star system could be brought under the wing of empire.” Shostak also points out that proponents of Fermi’s observation don’t rely on exotic technologies or faster than light travel, but regular, rocket-based travel moving along at relativistic speeds.

Various solutions try to explain this paradox, ranging from the idea that advanced societies eventually self-annihilate or that interstellar travel is simply too technologically tricky or impossible. The most depressing solution is that humanity is indeed unique, and therefore, alone.

Hart’s physical explanations more or less encompassed anything that may put physical limits on any such expansion. As he wrote, “visitors have never arrived on Earth because some physical, astronomical, biological or engineering difficulty makes space travel infeasible.” As a society that has only recently entered the vastness of space, these limits seem perfectly reasonable and applicable to our current situation.

Sociological explanations posit aliens may lack the initiative or desire to travel to Earth, including a lack of political will, motivation, interest, or merely a lack of societal organization to undertake such a costly and challenging proposition. Again, these explanations are undoubtedly familiar to 21st century Earthlings. We don’t always play nice, share our toys, and work together.

Temporal limitations encompass the various hypotheses that such civilizations may indeed exist but have not had enough time to reach us yet. Or, they may have visited us ages ago, and we missed them.

The latter leaves room for these galactic societies to exist in the first place but suggests that they may have died out eons ago.

Today, more exotic explanations have been offered for the Fermi Paradox, including increasingly popular ones like the “Great Filter” and the “Zoo Hypothesis.”

The Great Filter posits that all societies ultimately reach the same point in advanced technological development and die out. Whether a physical limit as proposed above, a societal or a temporal one like those mentioned by Hart, or something else altogether, the Great Filter acts as a theoretical set point where human-like civilizations either cannot advance any further, simply destroy themselves or for some other reason cease to exist. Like the previous possible answers, this explanation makes too much sense in our ever-evolving, rapidly technologically advancing world.

The Zoo Hypothesis is one often favored by those who find all of the above explanations insufficient, or have their own reasons to believe that we have indeed been visited in the past, are still being visited now, and are simply being left to our own devices by the various space-faring societies in a hands-off, Star Trek-like prime-directive sort of way.

As explained by Shostak in a 2019 SETI paper on the subject: “They’ve kept their distance not because we’re imperfect, but because of our right to pursue our own destiny. Diversity is something that everyone in the cosmos is assumed to value, so life-bearing worlds should be left to their own evolutionary development.”

OUTLOOK: Answering the Fermi Paradox in the 21st Century

As human technology evolves and our ability to spread further into the cosmos grows, researchers from numerous fields approach this age-old question from all sides. From Dr. Shostak and his colleagues at SETI, to the various teams scheduled to use the James Webb Telescope after its launch to begin searching exoplanetary systems for signs of life, these modern-day explorers are utilizing the latest, most cutting edge tools in hopes of finally finding an answer. Until then, the issue first proposed by Enrico Fermi over 70 years ago still rings true; “where is everybody?”