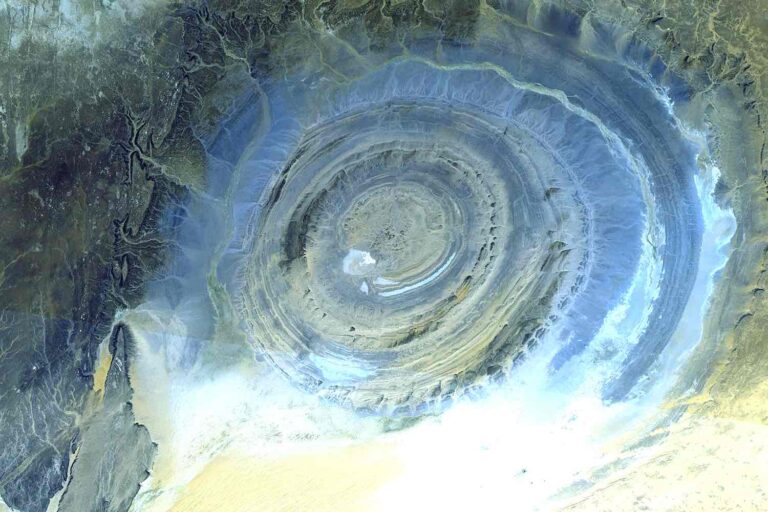 The Richat Structure: The “Eye of the Sahara” is One of Earth’s Strangest Marvels

On June 3, 1965, at the height of both the Cold War and the great Space Race between the United States and the Soviet Union, the Gemini IV mission lifted off from Launch Complex 19  at Cape Kennedy Air Force Station in Florida, carried into orbit aboard the Gemini–Titan II, a modified Intercontinental Ballistic Missile.

Only the tenth manned American spaceflight to have occurred by that time, astronauts James McDivitt and Ed White spent four days in orbit, during which White performed the first American spacewalk, spending nearly 20 minutes outside the spacecraft. Making a total of 66 trips around the Earth, the pair carried out several scientific experiments while in space.

“The objective of the mission was to test the performance of the astronauts and capsule and to evaluate work procedures, schedules, and flight planning for an extended length of time in space,” reads an official NASA historical summary of the mission. “Secondary objectives included demonstration of extravehicular activity in space, conduct stationkeeping and rendezvous maneuvers, evaluate spacecraft systems, demonstrate the capability to make significant in-plane and out-of-plane maneuvers and use of the maneuvering system as a backup reentry system, and conduct 11 experiments.”

Prior to entering space, McDivitt and White had been asked to photograph the Earth from space, and while doing so, to pay attention to what appeared to be “any large circular features which might be the roots of impact structures.” While passing over one of the planet’s hottest and most unforgiving regions—the Sahara desert—the astronauts spotted something which, to them, did look like it might have been evidence of a crater of some kind, albeit a strange one.

Peering at the astronauts like a massive eye emerging from the Saharan sand was a huge, circular object or structure, with a large central area encircled by rings of stone and sand extending around it in every direction for miles. At nearly 30 miles across, what the Gemini IV astronauts had easily observed—and photographed for the first time from space—had been a feature known as the Richat Structure.

Although the Apollo era provided Earth with the first images of the mysterious feature, it had actually been discovered decades earlier, at least as early as the 1930s. By 1948, French scientist Jacques Richard-Molard was arguably the first to propose that the mysterious feature might have been the result of a sheet-like intrusion known as a laccolithic thrust. However, upon its “rediscovery” by the Gemini IV crew in 1965, it was initially thought to have been an impact crater when it was observed from space. However, further studies showed it to have a flat central area, and the absence of shock-altered rock that would have been a telltale indicator of an impact event. Other theories that were proposed had been a volcanic eruption, which was later ruled out in favor of an uplifted region of rock sculpted over time by erosion, although its unusual circular appearance does remain mysterious.

According to a Business Insider article from 2016, although questions remain about the structure’s formation, a pair of Canadian geologists speculate that the Eye of the Sahara’s origins began more than 100 million years ago, “as the supercontinent Pangaea was ripped apart by plate tectonics and what are now Africa and South America were being torn away from each other.”

According to the theory, the present dome of rock layers resulted from molten rock that was thrust upward, but never actually reached the surface. Thus, the Sahara’s strange Eye is essentially the geological equivalent of a pimple, surrounded by “ripples” in the form of fault lines. Limestone that was dissolved near the center of the formation by the accumulation of molten rock caused it to collapse, resulting in the breccia formation geologists observe there today.

In addition to being a geological wonder, a wealth of archaeological data has been obtained from the Richat Structure over the years too. Ongoing studies at the site continue to assess the length of time and extent of human occupation on the Sahara Desert’s most peculiar geological feature. An abundance of Acheulean artifacts have been recovered there, indicating the presence of early archaic humans who lived and hunted around the peculiar formation.

However, most of the archaeological sites that are observed in the area are associated with quartz outcrops from which early humans could have gathered material for making stone tools. The majority of the archaeological locations around the feature exist along its outer ring on the northwestern side, and surveys beginning in around 1974 have found little archaeological evidence of human presence within the inner depressions of the structure.

The mysterious Eye of the Sahara has become a landmark for spacefaring shuttle crews since McDivitt and White first spied the structure from space back in 1965. Today, although many unusual natural phenomena have since been detected from Earth orbit, the Sahara’s famous Richat Structure remains one of the most impressive natural features visible anywhere on Earth from space.