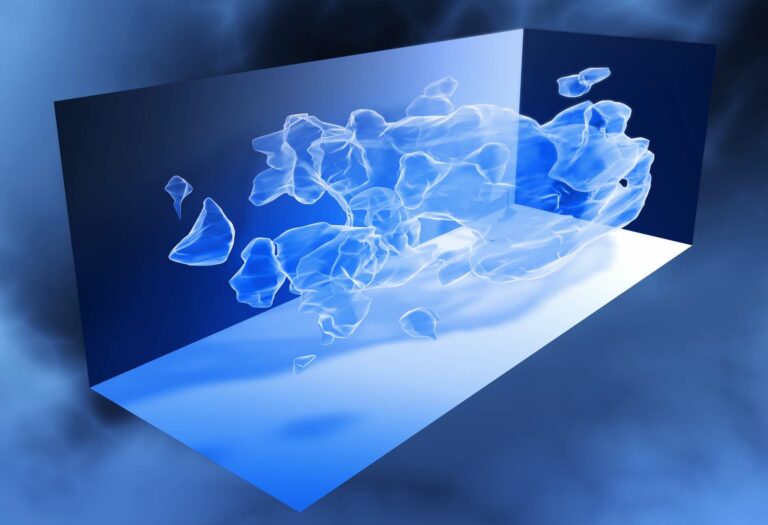 Dark Matter: The Scientific Method and Understanding the Unseen

There is five times more matter in the Universe than the ordinary matter we are made of. We know this from the gravitational influence of the invisible matter on visible matter.

The popular cosmological paradigm hypothesizes the existence of unseen matter whose temperature was negligible when galaxies started to form, hence labeled as “Cold Dark Matter”. This substance, whose nature is unknown, condensed into small galaxies first, and then later served as building blocks for larger systems up to the largest current scale of gravitationally-bound objects (clusters of galaxies).

Computer simulations of the formation of galaxies from small seed perturbations imply that all galaxies have a central density cusp, and there are numerous dwarf galaxies per each cluster of galaxies. But when observing the real universe, astronomers found evidence for flat dark matter cores rather than the expected cusps at the centers of dwarf galaxies and also fewer satellites than expected around the Milky Way.

The anomalous tension on small scales between the theory of Cold Dark Matter and observational data on dwarf galaxies could be relieved if the dark matter interacts with itself and particle scatterings flatten the expected density cusps. The self-interaction is needed at the small characteristic speeds inside the shallow gravitational potential wells of dwarf galaxies on the order of ten kilometers per second. The required cross-sectional area for interaction is relatively high, about ten centimeters squared per gram of material. This interaction cross-section is similar to that of ordinary matter with itself. However, the interaction of dark matter with ordinary matter must be much weaker, making it invisible.

Whereas deviations from the expected behavior of collisionless matter exist on small scales, they are not observed on the larger scales of clusters of galaxies. For example, the “Bullet Cluster” exhibits two components colliding at the high speed of a few thousand kilometers per second. The dark matter, mapped by gravitational lensing, appears to travel freely through the collision interface as expected for collisionless particles, while ordinary matter is stopped at that interface. This implies that the dark matter is collisionless at high speeds, as expected for cold dark matter.

Recently, I wrote a paper showing that if dark matter is clumped into objects that weigh ten thousand times the mass of the Sun, then these objects would scatter gravitationally on each other with the required cross-section of ten centimeters squared per gram at the characteristic speed of dwarf galaxies. As needed, the cross-section for gravitational scattering declines with increasing speed to the fourth power and would be vanishingly small for clusters of galaxies.

Several hours after my paper was posted on the e-print archive, I received an email from Professor Jo Bovy at the University of Toronto. He informed me that thin streams of stars, generated when the gravitational tide of the Milky Way stretches star clusters and dwarf galaxies, can be used as a sensitive probe of the granularity of dark matter. The dark matter clumps that my paper proposed would disturb these thin streams of stars over the billions of years of their existence. Exquisite data from the Gaia mission and the upcoming Legacy Survey of Space and Time (LSST) on the Vera C. Rubin Observatory would be able to rule out my proposal.

Frankly, I was delighted to hear from Jo because the same future data that he plans to analyze could also validate my model. I wrote back to him: “Thanks, Jo. I would love to see the results of your future analysis. I am excited that there is this clean test. If you rule out my model, then self-interacting dark matter must be elementary particles with a very unusual interaction – as strong as exhibited by ordinary charged particles, which sounds weirder to me, but may be correct.”

The beauty of science is that even if scientists start on a mission to disprove a hypothesis, in the end, they might end up proving it instead. A well-known example involves black hole entropy, first proposed in 1972 by Jacob Bekenstein in his Ph.D. thesis at Princeton University. He suggested that black holes have an entropy proportional to the area of their horizons based on Stephen Hawking’s area theorem from 1971 that a black hole area can only increase, resembling the second law of thermodynamics – that entropy increases over time.

Hawking himself was not convinced by Bekenstein’s heuristic argument and did a quantum-mechanical calculation intended to disprove it, only to find out in 1974 that black holes emit thermal radiation at a characteristic temperature that is inversely proportional to their horizon scale and therefore possess an entropy proportional to their area, as conjectured by Bekenstein. Rather than disproving the notion, this derivation firmed up the case for the Bekenstein-Hawking entropy of black holes.

This process illustrates how science is best done: not by prejudice, but through new quantitative calculations, or even new data analysis in response to an intriguing hypothesis.