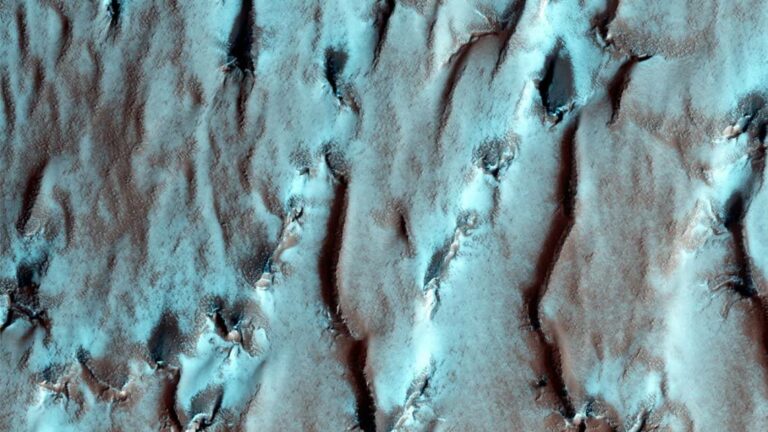 Mars is a key future destination that both government and private space organizations aspire to visit. With its thin atmosphere and barren landscape, many experts have realized that the planet will have to become more hospitable for successful long-term missions. In order to achieve this, researchers have been investigating possible water ice deposits on Mars as a way to support visitors, which may be hidden beneath reflective areas recently observed on Mars’ surface.

However, researchers from Cornell University believe that the reflective spots recently observed may not be due to the presence of water but instead the complex geological layers present on the Red Planet.

Background: The Geology of the Red Planet

Mars was formed around 4.5 billion years ago as gravity drew in gas and dust to form the planet. While Mars is about half the size of Earth, it also contains a solid crust, a rocky mantle, and a central core just like our planet does. This makes Mars’ geology interesting, as its core is composed of sulfur, iron, and nickel. The crust runs between six and 30 miles thick on the surface and is made of potassium, aluminum, calcium, and magnesium. This combination of elements results in a unique series of geological layers, which may be part of what gives certain areas of Mars its reflective surface.

To understand these reflective spots on Mars, researchers at Cornell University employed various simulations to try and mimic these layers.

“On Earth, reflections that are bright are often an indication of liquid water, even buried lakes like Lake Vostok,” says research associate Dan Lalich. “But on Mars, the prevailing opinion was that it should be too cold for similar lakes to form.”

Using simulation software, Lalich and the team created geological layers made of four unique materials: atmosphere, carbon dioxide, water ice, and basalt. After some test runs, Lalich found that three layers–two carbon dioxide layers and a layer of dusty ice–produced similar reflective surfaces as those seen on Mars. Based on this, the researchers mused that these reflections could be generated by interference between these special layers without the need for water.

Based on their results, the researchers wondered if these geological layers had water ice. For Lalich, it’s essential to determine what is not liquid water on Mars in order to identify how much may be usable.

“None of the work we’ve done disproves the possible existence of liquid water down there,” Lalich explained. “We just think the interference hypothesis is more consistent with other observations. I’m not sure anything short of a drill could prove either side of this debate definitively right or wrong. If there is liquid water, maybe there’s life, or maybe we could use it for future human missions to Mars.”

While research involving the surface of Mars is still ongoing, Lalich and his team now believe that in the absence of these potential sources of water many had hoped for, the Red Planet planet could slightly less hospitable than once expected. The results of the team’s research was recently published in Nature Astronomy.