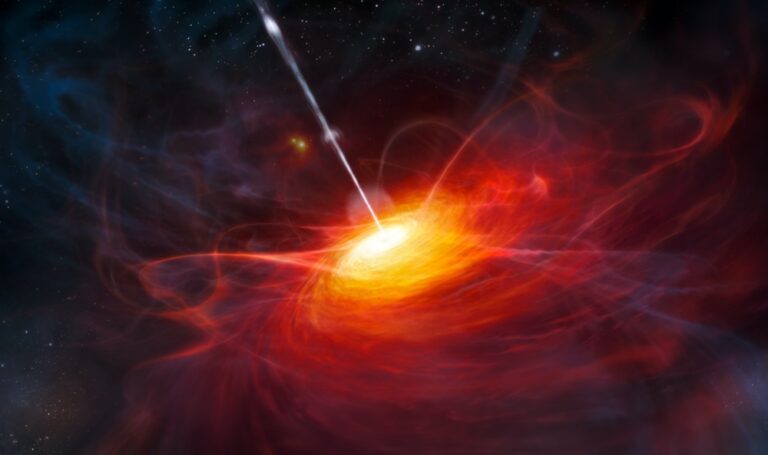 The Scissors of Academic Review

Over the past seven years, astronomers identified a new type of quasars that change their look. These `changing-look-quasars’ are supermassive black holes in galactic nuclei that brighten over a period of months to years for an unknown reason.

It is well known that when a star like the Sun passes within the Earth-Sun separation from the black hole at the center of the Milky-Way galaxy, the gravitational tide could disrupt the star into a spaghetti-like stream of gas that would eventually accrete into the black hole like a stream of water swirling down the sink. Since I wrote a dozen papers on such tidal disruption events four years prior to the identification of `changing look quasars’, it occurred to me that these quasars might be brightening temporarily as a result of the tidal disruption of a star.

In collaboration with Hamsa Padmanabhan from the University of Geneva in Switzerland, we wrote a paper in March 2020 showing that, indeed the observed appearance and rate of `changing-look-quasars’ agree with expectations from tidal disruption events of stars.  Our manuscript was submitted for publication in a prestigious astronomy journal, where a few experts on quasars reviewed the paper and declined its publication based on semantic arguments. After a long exchange with the referees during which we incorporated all proposed suggestions, the paper was still deemed unsuitable for publication by the editors. We were therefore forced to resubmit the updated version to another journal, Astronomy & Astrophysics – with a higher impact factor than the original submission journal, where the manuscript was instantly accepted for publication. My student, Amir Siraj, and I had a similar experience concerning our fragmentation scenarios for the origin of the meteor that killed the dinosaurs, which recently received support from the new finding of a second crater associated with a companion meteor fragment.

This sequence of events illustrates the recurring phenomenon of “experts” tending to dismiss novel ideas just to protect their intellectual territory from practitioners who did not earn the privilege of belonging to their club of expertise.

But here comes the interesting part. Recently, two teams of observers detected independently detected two `changing look’ galactic nuclei that can be explained as a tidal disruption event based on detailed data. One would expect the abstracts of their papers (linked here and here) to explicitly credit the theoretical prediction from our paper with Hamsa that predated their work by years. But in reality, there was no mention of her work with me in these “discovery” papers.

What is the moral of the story? New ideas tend to be dismissed by experts at first, and when observational evidence implies that the ideas are correct – those who discover the new evidence claim to be first.

Is this a rare sequence of events?  A couple of decades ago, a visiting committee to the Department of Astrophysical Sciences at Princeton University was told by the department head that they have a glorious historical tradition dating back to Henry Norris Russell, who discovered that the surface of the Sun is made primarily of hydrogen. Gladly, a member of the visiting committee, who is faculty at the Harvard Astronomy department, corrected his assertion with the following true story.

Cecilia Payne-Gaposchkin was the first astronomer to realize through her PhD work in 1925 at Radcliffe College, that the composition of the Sun is different from that of the Earth. This was contrary to popular belief at the time, and the director of the Princeton University Observatory, Henry Norris Russell, wrote to her that the findings were “clearly impossible”, only to realize that she was right through his own work four years later.

Clearly, history depends on who writes it. But one would hope that scientific research is an honest endeavor in which credit is given to the pioneers who deserve it.

The best circumstances under which this actually happens is when the pioneers are dismissed for a long while by mainstream experts, and the controversy is well known to everyone, so that credit cannot be taken away from those who were initially dismissed. This was the case when Albert Einstein came up with the Special Theory of Relativity in 1905 as an outsider to the authorities of physics, in the form of a clerk in a Swiss patent office at Bern, a couple of hours drive from Hamsa’s office as a postdoctoral fellow.

Dark Matter: The Scientific Method and Understanding the Unseen

But even that path to credit is not guaranteed. Many of the pioneering discoveries of Fritz Zwicky were controversial because his genius was not socially popular, whereas his contemporary, Edwin Hubble, hired a publicity agent in the 1940s and so his name recognition is far greater.

And there are also those who are ahead of their time, like Immanuel Kant, who argued as early as 1755 in his book Universal Natural History, that the Solar system had formed from a large cloud of gas and that the Milky Way was a disk of stars, which he theorized formed from a larger spinning gas cloud. He further suggested that other distant “nebulae” might be other galaxies. This was 165 years before the Great Debate between Harlow Shapely and Heber Curtis on the same issue in 1920. Shapley, who became the director of the Harvard College Observatory a year later, had much more data at his disposal than Kant, yet he reached the wrong conclusion. Kant is not credited for his foresight in modern articles.

The scissors of the scientific review process is particularly harmful for innovation by young scientists with no recognized track record in the field. Here’s hoping that the future of science will be shaped by merit and diversity of ideas and not by the whims of experts worried about protecting their intellectual territory and their self-esteem.