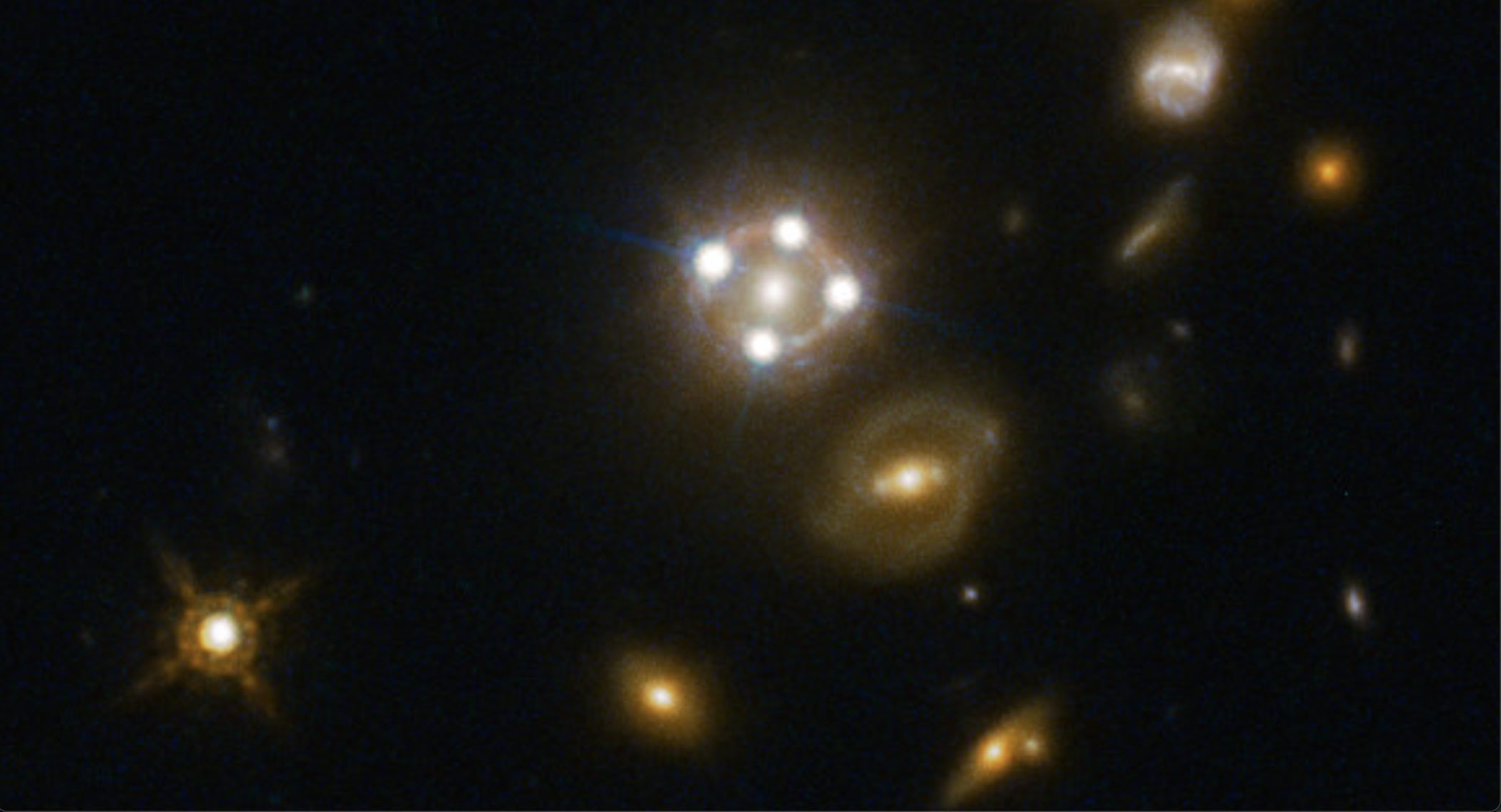 A dazzling quartet of beaming, bluish “ghost” images representing a quasar 8 billion light years from Earth, the eerie Einstein Cross looks strange enough that, to the untrained eye, it might seem entirely out of place in our cosmos. Another word that may spring to mind while looking at it, at least for some, could be “manufactured.”

However, despite its striking visual appearance, the Einstein Cross is far from being evidence of a distant alien megastructure. In fact, it is entirely in keeping with the predictions of the famous physicist from whom it borrows its name.

The unearthly looking cross-like shape of QSO 2237+0305, as it is formally known, is actually the result of the intense gravitational lensing of a single quasar resting directly behind the galaxy ZW 2237+030, otherwise known as Huchra’s Lens.

Gravitational lensing occurs when light from a faraway source is bent by the gravity of mass between it and an observer over a great distance. In the case of QSO 2237+0305, its position directly behind the center of Huchra’s Lens causes light produced by the quasar to be shaped into the distinctive, cross-like orientation. The same effect, albeit under slightly different conditions, also gives rise to what are known as Einstein rings, where gravitational lensing diverts the light of a distant star, resulting in what resembles a a halo like ring of light.

The Einstein Cross was first discovered in 1985 by astronomer John Huchra and several colleagues, although they initially were not able to discern the four separate projected images of the quasar, instead detecting it through observations of varying redshifts. Since that time, several more Einstein Crosses have been discovered throughout our universe, although they remain rare because astronomers are still unsure about the locations where they are likely to appear and detecting them relies on the collection of special imagery.

“We have no clue where to search for them exactly,” said Francois Mignard of the University of Côte d’Azur in France in 2021, following the discovery of 12 new Einstein Crosses by the Gaia Gravitational Lenses working group (GraL). According to Mignard, finding them “requires high spatial resolution imaging just to locate candidates,” making their detection extremely difficult.

In the 2021 study, the results of which were published in The Astrophysical Journal, the Gaia team relied on machine learning to help detect quasars that were subjected to strong gravitational lensing from Gaia’s Data Release 2. Even in instances where apparent Einstein Crosses had been detected, the team still had to confirm whether there could have been an entirely separate alignment of four independent sources that simply resembled the familiar cross-shaped orientation they were searching for.

Additional help in determining likely candidates for Einstein Crosses came courtesy of NASA’s Wide-field Infrared Survey Explorer (WISE), which helped the team locate areas that were later subjected to spectroscopy from telescopes at various locations on the ground. Combining their observations, 12 candidates were left which were confirmed to have been real Einstein Cross quasars.

Apart from their striking appearance, Einstein Crosses could also play a significant role in helping astronomers understand the physics behind the ongoing expansion of our universe, and why its growth rate is accelerating. Currently, our understanding of gravity does not fully account for why there would be an ever-quickening pace at which our universe continues to expand. To help account for this, physicists rely on the hypothetical presence of dark energy, an unseen substance which is believed to counter the effects of gravity from more easily detectable sources of mass, thereby causing the universe to expand at its present rate of acceleration.

In 2017, a team of researchers focused their observations on large galaxies positioned in front of distant quasars, conditions ideal for producing Einstein crosses. Such galaxies are incapable of distorting light from the quasars behind them in perfect spherical orientations since the two objects are not perfectly aligned. This causes light from the distant quasars to follow paths that possess varying lengths. Based on this, astronomers also relied on the fact that the magnitude of the light produced by quasars changes over time, which produces a “flickering” effect where the delays between flickers represents a measure of the length of the light’s path in a given instance (see video below).

According to the team’s 2017 study, those delays are also related directly to the Hubble constant, involving the proportional relationship between the speed at which a galaxy is moving away from Earth and its distance. In other words, the researchers were able to use their observations of gravitationally lensed quasars to test the Hubble constant.


The UN crowdfunded the money to drain the FSO Safer, but the ship still sits off the coast of Yemen, and the winds are coming.....

“Our method is the most simple and direct way to measure the Hubble constant,” said Frédéric Courbin of the EPFL, Switzerland, the co-lead of the 2017 study, adding that his team’s method “only uses geometry and General Relativity, no other assumptions.” Based on such findings, researchers are granted not only a clearer picture of the expanding universe, but also the role that dark energy may play in the bigger cosmic picture.

The original Einstein Cross, located within the constellation Pegasus, is partly visible to amateur astronomers with the aid of a telescope under ideal conditions. Aling with very dark skies, viewing it through a telescope possessing a mirror with a diameter of 18 inches or greater is required to produce optimal results. For more information, additional details on viewing the Einstein Cross can be found at this FAQ page.