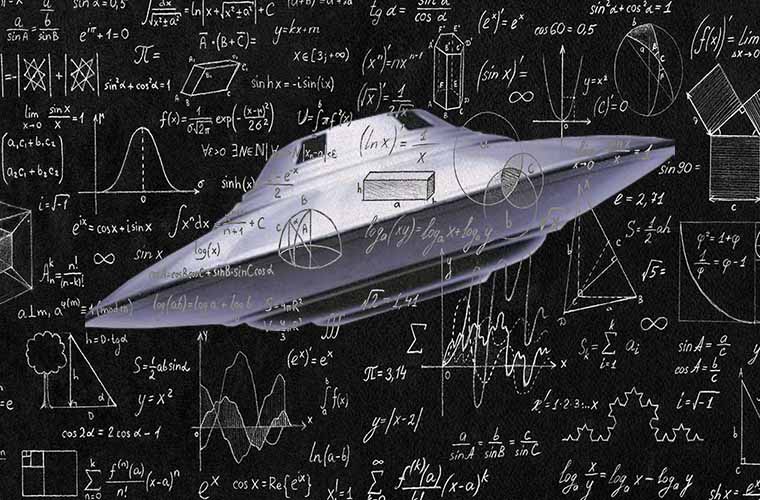 UFOs: Shifting the Narrative from Threat to Science


What stands in the way of the scientific community’s taking on the challenge of discovering if any UFOs are extraterrestrial?

UFOs are real. We have no idea what they are or where they come from. This is now an accepted fact, confirmed in a June 2021 report from the Office of the Director of National Intelligence.

Republican Senator Mitt Romney, one of many officials who read the classified section of that report, told CNN that the objects are not ours, and he doesn’t believe they belong to any foreign adversary. “If they were, why that would suggest they have a technology which is in a whole different sphere than anything that we understand,” he said. “And frankly, China and Russia just aren’t there, and either are we, by the way.”

Other officials went a step further. “I think a lot of folks would like for us to say that these sightings are extraterrestrial,” Democratic Congressman André Carson of the House Permanent Select Committee on Intelligence said on July 4.  “The intelligence community says we can’t completely rule that out, but it’s clear we have to do a lot more digging.” Carson called for Congressional hearings on UAP (unidentified aerial phenomena) in the near future.

Having reported on this once-taboo topic for over twenty years – most recently in a series of stories I co-wrote for The New York Times – I believe we may have finally arrived at the threshold of a new paradigm.

The military and intelligence establishments remain the guardians of our most profound secrets on UFOs. Their current narrative frames UAP as a national security threat, which is understandable since the mysterious vehicles operate with impunity in restricted airspace.

But – what about the deeper implications of this mystery? Can we find out what UFOs actually are?

“The issue is not purely one of airborne objects; it also involves unidentified underwater vehicles and unidentified vehicles in orbit or beyond,” Christopher Mellon, a former Deputy Assistant Secretary of Defense for Intelligence who has been helping shape policy on UAP, pointed out in his latest recommendations for Congress. Officials now understand that the phenomenon is more complex than they may have thought.

This is the moment for scientists to step up and independently take on the challenge of learning more about these anomalies so they can share that knowledge with all of us. The stigma that has prevented a unified effort is slowly dissolving.

Yet many scientists remain embarrassingly uninformed on this topic. Astrophysicist Neil deGrasse Tyson, the go-to celebrity most often called on to “shed light” on UFOs, frequently poses nonsensical rhetorical questions to point out the silliness of believing in alien visitors, which likely confuse people.

“Why would they only reveal themselves to Navy pilots or to the military?” he asked in a June 10th interview with Sam Harris. He wonders why the billions of cell phones on the planet have not yet captured a video of an alien walking towards the camera that could be live-streamed.

Tyson makes it clear that we don’t know what UFOs are, and therefore assuming they are alien is an error. This is a very important point: until we know, we don’t know. Yet Tyson spends most of his time in interviews attacking this very perception by making the idea of alien visitors look ridiculous.  Since no official has ever claimed that UFOs are aliens, and the recent government report didn’t even hint at this possibility, his arguments are beside the point and irrelevant to the current dialogue. (Some authorities have outlined what UFOs very likely are not, leaving the door open to a range of possibilities.) Tyson’s straw man argument against aliens, often mixed up with inaccurate information, allows for a kind of disingenuous skepticism that undermines his role as a respected educator.

It would be helpful if, instead Tyson would inform the public about what we know (and don’t know) about a very real phenomenon for which we have no explanation. His Twitter feed features a long list of jokes about aliens. “If a UFO beams you up, steal a gizmo from the Alien’s shelf when it’s not looking. Bring that to the lab — you’ll need it to supplement your eyewitness testimony,” he posted three days after the much-anticipated ODNI report was released.

Another favorite talking point is to belittle the famous Navy videos released in 2017, one of which Tyson says might simply represent a glitch in the hardware.

“The best thing you have for me with your highly sophisticated Navy equipment is a fuzzy monochromatic tic tac? If that’s your best evidence, you have more work to do. Really!” Tyson pontificated in his June 10th interview.  Seth Shostak, senior astronomer for the SETI Institute, wrote in a July 29th Scientific American piece that “the three tantalizing videos released by the Navy can be understood by invoking aircraft and balloons.”

The reality is that highly qualified Department of Defense and intelligence technicians studied the videos and all related classified data, including eyewitness reports from Navy pilots. In 2019, a Navy spokesperson informed the public that the three videos show “unidentified aerial phenomena” – UAP.  I dare say the government analysts were competent enough to recognize balloons, planes, or electronic glitches.

Like Tyson, Shostak poses odd questions to illustrate a paucity of evidence, such as “Why are they here now? Why didn’t they visit the Romans?”  He can also be factually inaccurate when discussing UFOs. “Well, 700 orbiting satellites that already surveil our planet haven’t seen anything that humans didn’t put there,” he stated in his July 29th article.

I asked Mellon – a leading expert on UAP with strong ties to the Department of Defense – if this is true. “As former Director of National Intelligence John Ratcliffe has correctly stated, we certainly do have satellite photos of airborne objects we can’t identify,” he told me. Obviously, such data is classified.

Ratcliffe’s comment was widely publicized. “We’re talking about objects that have been seen by Navy or Air Force pilots, or have been picked up by satellite imagery, that frankly engage in actions that are difficult to explain, movements that are hard to replicate, that we don’t have the technology for,” he told FOX News in March, 2021. How could Shostak make a statement about something for which he has no data?

Although undoubtedly brilliant on everything else, these scientists act as if they are unaware that reams of classified information are what shape the positions of officials who recognize what’s going on. Clearly, our government would not be mobilized on UAP the way it is without access to much more data than we citizens have seen. It was well-publicized that the recent ODNI report had a longer classified section. This pool of unreleased information includes definitive, close-up photos and lengthy videos of UFOs, according to Luis Elizondo, the former director of the Department of Defense UAP program, and other former and current officials.

And, there is a robust international record going back to the early 1950’s documenting that UFOs have shown up just about everywhere, including near commercial airplanes and nuclear bases.

Unfortunately, dismissive attitudes can be contagious. “The bar for accepting evidence in science is pretty dang high, and a bunch of unexplained blurry lights isn’t going to cut it,” echoes astrophysicist Paul M. Sutter in a June post titled “Top 5 Reasons Why the ‘UFO Report’ Isn’t Interesting to me, a Scientist.”

Well, UFOs are dang interesting to better-informed experts. Alexander Wendt, professor of political science at Ohio State University who has published on the underpinnings of the UFO taboo, believes we could be on the precipice of the most important discovery in human history. “If any UFOs are extraterrestrial, then we are not only ignorant but, in my view, we are truly stupid if we’re not using science to try to find out what’s going on,” he said during a 2020 TedX talk titled “Wanted: A Science of UFOs.”


Here’s what we know about next week's Congressional hearings on UFOs, and the DOD's ongoing investigations into the phenomenon.

According to Wendt, taboos are about fear. Perhaps “we are afraid subconsciously of what we might find out if we actually opened up the door of science and tried to understand what these phenomena are,” he said.

Sarcasm and arrogance are a good cover for such simmering fears.

Peter Sturrock, emeritus professor of applied physics at Stanford University, has been researching and writing on the UFO phenomenon for decades. “Maybe they need to be assured that it is normal to feel helpless in coming face-to-face with the unknown,” he told me when I asked why scientists shy away from this topic.

But change is coming. Avi Loeb, the well-known theoretical astrophysicist from Harvard University, has just opened the door to a potentially revolutionary shift.  On July 26, he launched the Galileo Project, an academic effort to search for evidence of technological alien civilizations near Earth. The project plans to install an array of instruments and sensors to continuously scan the skies seeking data on UAP, which would include a search for satellites not put there by humans. It has already raised $1.8 million from private donors.

And there are other possibilities. Any physical materials retrieved from alleged crashed anomalous vehicles which are locked away in secret government programs should be made available for study by outside experts. “If the best data or supposed materials remains secret after the UAP report comes out, any funds that might get authorized will go into the deep black programs again and we will never be able to take advantage of a more open scientific process,” Garry Nolan, a professor of pathology at Stanford who is currently analyzing physical samples retrieved from possible UFO crash sites, told me in an email. Nolan has published over three hundred research articles and has been honored as one of the top twenty-five inventors at Stanford University.

Christopher Mellon recommends that the government set up a national panel of independent scientists to study the UAP issue with “access to all but possibly the most sensitive classified data.” If that happens, perhaps Neil deGrasse Tyson and others will find common ground in approaching UAP as a serious scientific problem rather than as a cultural battle about aliens.

We may be on the way towards realizing that goal. Seth Shostak recently joined the scientific advisory board of the Galileo Project headed by Avi Loeb, who for now is leading the charge.  “As a SETI scientist, I’m grateful that he has the freedom—and the guts—to go where few would dare to go,” Shostak wrote in his July 29th opinion piece.

Scientists must become determined to understand this mystery of our universe, as they have done so many times before. A potential paradigm shift always meets with resistance, but we are now seeing a crack in the dam. According to Loeb, “We should be open-minded to the possibility that science will one day reveal a reality that was previously considered as fiction.”

Leslie Kean is an independent investigative journalist and author of the New York Times bestseller UFOs: Generals, Pilots and Government Officials Go On the Record.  Kean’s two decades of reporting on UFOs culminated in a series of groundbreaking stories co-authored with Ralph Blumenthal and Helene Cooper for The New York Times from 2017 – 2020.  Her work was profiled in The New Yorker in May, 2021.