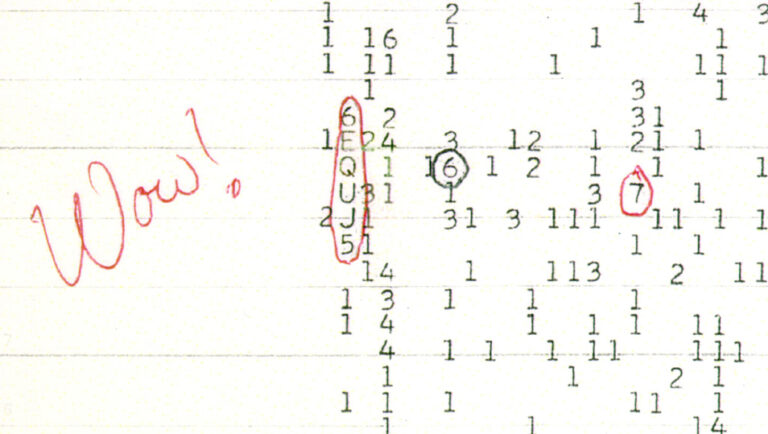 The Wow! Signal: Did We Receive an Alien Message in 1977?

The search for extraterrestrial life using radio signals has been an uphill battle for decades, yielding very few results. But in 1977, a lone radio astronomer in Ohio detected a signal that was so out of the ordinary that he couldn’t help but scribble one word next to the data he’d received; “Wow!”

Background: What is the “Wow!” Signal?

In August of 1977, a team of astronomers at Ohio State Observatory detected something unusual while using “The Big Ear,” the appropriately named radio telescope at Ohio State University. One of the team members, Jerry Ehman, recorded a 72-second signal that, at the time, was pointed at a group of stars called Chi Saggittarii in the Sagittarius constellation. The data that came back from the signal stood out amongst the low numbers of background noise.

The university’s computer system to measure the intensity of signals from space used a simple alpha-numeric code. 0s and 1s were simply silent delays in computer processing, while numbers ranging from 1 to 9 indicated a range of low to mid-intensity cosmic signals. The signal intensity of 10 to 11 was represented by the letter A, and 11 to 12 was represented by a B, and so on.

The universe’s baseline background hum sat at around a 1 or a 2 on their computer’s print outs. Then, suddenly, letters such as E, Q, and U popped up on their feed, indicating a signal thirty times higher than the base level noise. Word spread quickly, and the “Wow! Signal” remains one of the most interesting pieces of evidence ever produced within the Search For Extraterrestrial Intelligence (SETI) research field. However, like most signs of aliens, it came with a lot of controversy and hypotheses to explain it away.

Analysis: Was it a rogue comet?

There have been many theories put forward to explain the Wow! Signal.

Initial explanations included a stray signal from an unknown military satellite and possibly even a signal that may have bounced off the Moon. However, since no other telescopes picked up the signal that night, those two theories seem to wash out. Other theories posit a possible supernova and even a glitch in the university’s computer system.

More recently, astronomer Antonio Paris, out of St. Petersburg College in Florida, published a paper in the Journal of the Washington Academy of Sciences that proposed that the signal may have come from a hydrogen cloud accompanying a comet. He and his team argued that the movement of a comet would explain why the signal was never heard again. They elaborated on their theory by proving that two different comets had been in the exact area that the Big Ear telescope had been monitoring that night. They also tested readings by three different comets and found results in the data very similar to the Wow! Signal.

However, even Paris’ theory doesn’t seem to be accepted by everyone. When Popular Mechanics published an article concerning his team’s theory, astronomers from Ohio State University pointed out that comets could not have accounted for the signal.

Outlook: The Wow! Signal Drives Curiosity (and maybe that is all that matters).

While the explanation brought forward by Paris and his team is compelling, the team admits that they can’t say with certainty that this explains to Wow! Signal. And while this historical moment over forty years ago remains a mystery, it hasn’t stopped SETI researchers from continuing their pursuits.

The new area of study within the SETI research community includes searching for technosignatures. Such is the case for the Blue Marble Space Institute of Science and the SETI Institute. And the WOW! Signal is a constant reminder that sometimes, guests may pop in when you least expect it. And maybe, just maybe, one day, we’ll be ready to finally make contact.