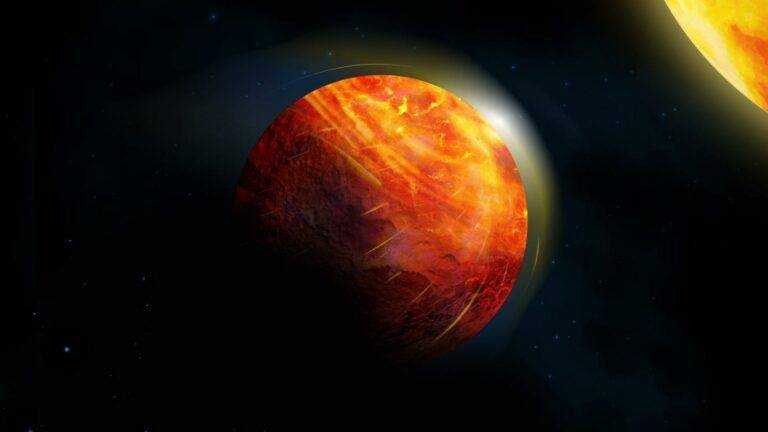 This Lava Exoplanet is Comprised of Burning Rock

In a new study published in Monthly Notices of the Royal Astronomical Society, scientists use computer simulations to map out the atmospheric and surface conditions of the lava exoplanet K2-141b. The Earth-sized planet’s surface, ocean, and atmosphere is almost entirely comprised of rocks, horrifying nightmarish burning rocks.

A joint team of researchers and scientists from McGill University, York University, and the Indian Institute of Science Education studied some pretty extreme exoplanets that dot the Milky Way Galaxy known as lava planets. These worlds closely circle their host stars and are so hot that their oceans are molten lava. According to the study, Planet K2-141b is the subject of some pretty novel telescope technology that is able to provide a much clearer understanding of how planets evolve. The team discovered that K2-141b seems to be a little stranger than some of the other lava planets out there and not only contains oceans of lava but an atmosphere so hot that the parts of the planet’s lithosphere, it’s rocky surface, evaporates. As those gases cool, they liquefy and solidify only to rain back down as flaming rocks. Even more terrifying, the planet’s winds reach supersonic speeds of 5000 km/h.

While K2-141b may be a terrifying hell world, scientists hope to use the planet’s extreme conditions to begin chipping away at our understanding of weather changes on planets, which are hundreds of lightyears away.

“The study is the first to make predictions about weather conditions on K2-141b that can be detected from hundreds of light-years away with next-generation telescopes such as the James Webb Space Telescope,” said the lead author Giang Nguyen, a Ph.D. student at York University who worked under the supervision of McGill University Professor Nicolas Cowan, in a statement.

The team analyzed the exoplanet’s illumination pattern and discovered that roughly two-thirds of the planet faces the local star and receives perpetual daylight. Being locked in place due to its proximity to its local star, the exoplanet has a permanent dark side.

The team found that much like the hydrologic cycle on Earth, where water evaporates into the atmosphere and then rains back down, K2-141b’s rock vapor follows a similar pattern. The dark side of the exoplanet exists in perpetual brisk -200 degrees centigrade while the “dayside” of the planet burns at a rock vaporizing 3000 degrees centigrade. At those temperatures, sodium, silicon monoxide, and silicon dioxide evaporate and form a thin atmosphere. The supersonic winds blow the rocky vapor over the dark side of the exoplanet, where it begins to cool, but due to the wind speed, that vapor falls as precipitation and flows back into the burning magma oceans on the dayside of the planet. The cycle then starts again.

“All rocky planets­, including Earth, started off as molten worlds but then rapidly cooled and solidified. Lava planets give us a rare glimpse at this stage of planetary evolution,” says Professor Cowan of the Department of Earth and Planetary Sciences at McGill University in a statement.

The team plans to use multiple advanced telescopes to check their findings, including the James Webb Space Telescope that will be launching in 2021.