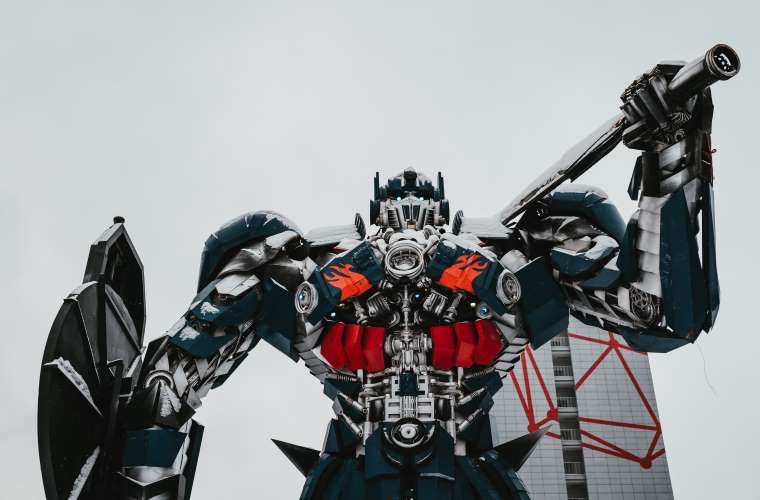 Photo by Arseny Togulev on Unsplash

This Real-Life Transformer Robot Can Drive, and Fly

Researchers from Virginia Tech University have created a real-life transformer robot that can change from a driving vehicle to a flying one and then back to a driving one. Furthermore, the engineers behind the groundbreaking achievement note that their robot can transform itself without motors or pulleys but instead uses temperature and custom materials to morph itself between pre-programmed shapes.

In the movies, robots can change from cars to jets to helicopters and then back to a car, all with the push of a button. In real life, no such transformers exist. This situation has left researchers in robotics two choices; they can wait for Optimus Prime to show up and save the day or figure out how to make real-world transformers all on their own.

Led by Michael Barnett, an assistant professor in mechanical engineering, the Virginia Tech team chose the latter. And according to their recently published paper, they may have created the world’s first fully transformable robot without the help of any Decepticons.

THIS REAL-WORLD TRANSFORMER CAN DRIVE, MORPH, AND THEN FLY

“When we started the project, we wanted a material that could do three things: change shape, hold that shape, and then return to the original configuration, and to do this over many cycles,” said Bartlett in the press release announcing their research. “One of the challenges was to create a material that was soft enough to change shape dramatically, yet rigid enough to create adaptable machines that can perform different functions.”

To accomplish this set of goals, Bartlett and his team looked to the Japanese art of kirigami, which involves making shapes from paper by strategically cutting it (as opposed to the more well-known origami, which involves folding paper to achieve different forms). This research led the team to a set of viable, repeating patterns that guided their transforming robots’ structure.

Next, the team had to select materials that would allow them to create one rigid shape for its driving robot, be pliable enough to transform into the shape of a quadcopter robot, then regain its rigidity so the copter could fly. The team ultimately settled on an endoskeleton made of a low melting point alloy (LMPA) embedded inside a rubber skin. This combination did the trick, allowing the robot’s transformation using only heat.

“Normally, when a metal is stretched too far, the metal becomes permanently bent, cracked, or stretched into a fixed, unusable shape,” the press release explains regarding their material choices. “However, with this special metal embedded in rubber, the researchers turned this typical failure mechanism into a strength. When stretched, this composite would now hold a desired shape rapidly, perfect for soft morphing materials that can become instantly load-bearing.”

To achieve a material that could be heated to change shape then cooled to regain its original form, the team added soft, tendril-like heaters next to the LMPA mesh. The LMPA used has a melting point that is only 10% that of aluminum (around 140 degrees F). So when the heaters activate, the endoskeleton can morph into the shape programmed through kirigami, in this case, a quadcopter.

Furthermore, the elastomer skin that houses this LMPA keeps it in place when it is in liquid form while also pulling it back into its original shape once it is cooled, a process researchers call “reverse elasticity.”

“These composites have a metal endoskeleton embedded into a rubber with soft heaters, where the kirigami-inspired cuts define an array of metal beams,” said graduate student Dohgyu Hwang, who was part of the Virginia tech robotics team. “These cuts combined with the unique properties of the materials were really important to morph, fix into shape rapidly, then return to the original shape.”

MORPHING TRANSFORMER DRONES AND THE FUTURE OF ROBOTICS

Aside from fighting with space robots, the researchers behind the world’s first transformer see a wide range of possible applications. The first is a fully transformable drone based on their prototype robot that can go from a driving configuration to a flying one at the flip of a switch. The team also built a transforming submarine using this technology capable of retrieving objects from the bottom of their test aquarium, opening up the possibility of using transformers underwater.

“We’re excited about the opportunities this material presents for multifunctional robots,” said team member and graduate student Edward J. Barron III. “These composites are strong enough to withstand the forces from motors or propulsion systems, yet can readily shape morph, which allows machines to adapt to their environment.”

It may be some time before these types of robots are in general use. However, once the process is perfected, I would like a 1957 Chevy Belair 2 Door Hard Top that can transform into a Batcopter. So get to work.