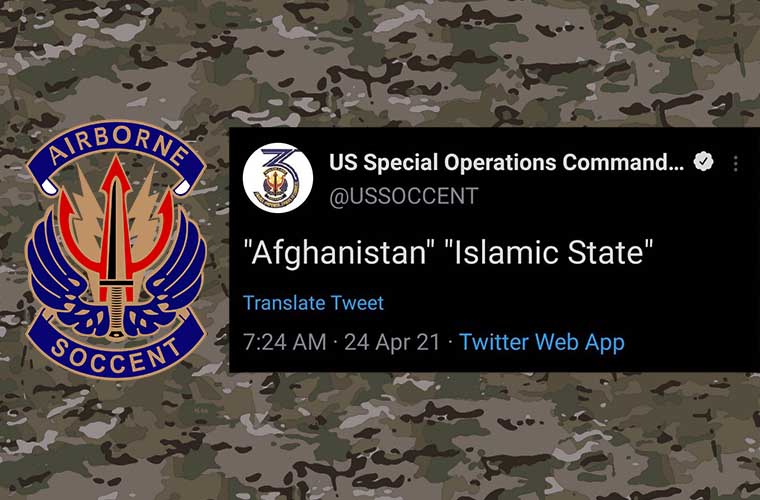 “In the past 12 hours, someone hacked our unit’s official account and tweeted a misleading message. We apologize for any confusion or insensitive content,” tweeted @USSOCCENT.

Headquartered at MacDill Air Force Base in Tampa, Florida, Special Operations Command Central is a sub-unified command of U.S. Central Command. SOCCOENT is responsible for planning special operations throughout Central Command’s area of responsibility, including the Middle East, Central Asia, and parts of South Asia.

This isn’t the first time bizarre messaging has come from the official Twitter account of one of the U.S.’s unified combatant commands or subcomponents.

Strategic Command is responsible for safeguarding America’s nuclear weapons, and it didn’t take long for Twitter users to begin joking that the nonsense tweet might have been the agency inadvertently sending out a nuclear launch code. Followers of QAnon latched onto the tweet, suggesting it was part of some secret government conspiracy theory.

It turned out, however, the bizarre tweet was merely an honest mistake.

USSTRATCOM’s Twitter manager had momentarily left his computer unattended, and their young child had jumped on the keyboard and started typing away.

“The Command’s Twitter manager, while in a telework status, momentarily left the Command’s Twitter account open and unattended,” read a response provided to The Daily Dot.“His very young child took advantage of the situation and started playing with the keys and unfortunately, and unknowingly, posted the tweet.”

In their response, USSTRATCOM stressed that the tweet was an accident and not the result of a hacking incident. “Absolutely nothing nefarious occurred, i.e., no hacking of our Twitter account,” said the Command FOIA and Public Affairs manager for USSTRATCOM. “The post was discovered and notice to delete it occurred telephonically.”

“If someone hacked your account why on Earth would they waste it on “Afghanistan” “Islamic State,” replied Twitter user @LethalityJane. “Stop claiming you were hacked when someone with account access messed up military challenge 2021,” @LethalityJane followed up.

If someone hacked your account why on Earth would they waste it on "Afghanistan" "Islamic State"https://t.co/PvppFfZU7W

Another Twitter user, @CriswellWJ, posted a cropped screenshot of SOCCOENT’s Twitter profile picture and the words “Molon Labe,” a Laconic phrase that means “come and take it,” and said, “I guess someone did.”

Finally, some who initially assumed the tweet was simply a blunder pointed out that one of America’s special operations commands official Twitter accounts being hacked was a far more concerning outcome.

The Debrief reached out to SOCCOENT public affairs for comment on the Twitter hack. However, so far, SOCCOENT has not responded.

As of now, how, why, and who purportedly hacked Special Operations Command Central’s Twitter account remains a mystery. The Debrief will provide updates if any new information becomes available.