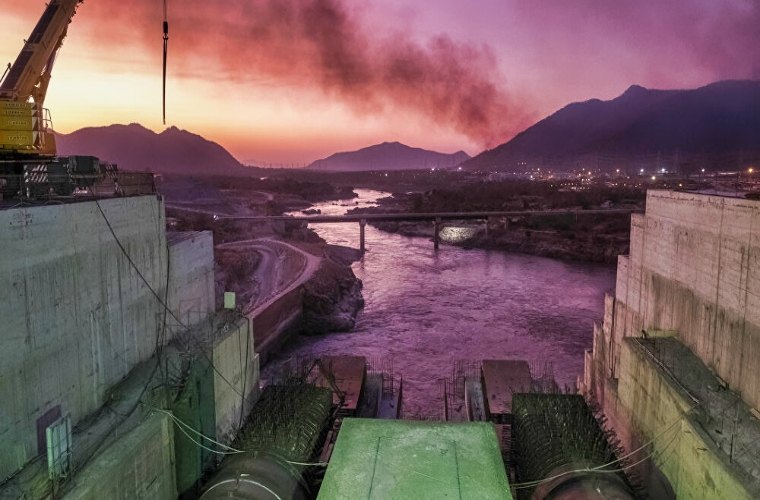 A new study printed in the journal Nature Energy shows how potential future conflicts between Ethiopia, Sudan, and Egypt connected to the recently constructed Great Ethiopian Renaissance Dam (GERD) could be avoided by integrating the use of green energy into the project’s goals.

To alleviate rising tensions that may lead to future conflicts, the study’s authors suggest using the operation of the newly constructed hydropower plant to support the integration of solar and wind power into the area’s power grid and to provide what they describe as “tangible energy and water benefits to all involved countries, creating regional win-win situations.”

“Our results call for integrated hydro-solar-wind planning to be taken up in the GERD negotiations,” said Sebastian Sterl, energy planning expert at Vrije Universiteit Brussel (VUB) and KU Leuven in Belgium, as well as lead author of the study. “Ethiopia could theoretically go alone, using GERD to back up its own solar and wind power. But it would work much better if, say, Sudan were to join in – it has better solar and wind resources than Ethiopia, allowing for better hydro-solar-wind synergies and reducing the overall costs of renewable power generation.”

Background: The Beginning of Tensions

Since construction began in 2011, the goals of the three affected countries have continued to diverge, leading to the current tensions. According to the study’s authors, those tensions have only increased since the dam’s construction finished in 2020, with its years-long filling process now underway.

For Ethiopia, which controls the land on which the dam itself is built, their main goal has always been simple; the power the dam will create. As the 2019 Ethiopian Yearbook of International Law points out, “Ethiopia aspires to generate 5150 MW of electricity, making the GERD the largest hydroelectric power plant on the African continent.” That same document also explains the dam project was entirely funded by Ethiopia, without any outside financing.

Unfortunately for the dam’s host country, and as previously noted, there are two fellow East African countries downstream from the project which will undoubtedly be adversely affected by the operation of the damn; Egypt and Sudan, with the 2019 yearbook noting how “the two riparian countries downstream, Egypt and Sudan, have expressed various degrees of concern, and in some cases open hostility, towards the project.”

The basis of this hostility, the study notes, is because Ethiopia “says it needs GERD’s electricity to lift millions of its citizens out of poverty.” But, the study continues, “Egypt is deeply concerned by the mega-dam’s consequences for the Nile River since its agriculture depends entirely on Nile water.” Due to regional politics and their position downriver from the dam, the paper notes that Sudan has been placed precariously between the two parties.

Although efforts to mediate have been tried, according to the release, “Certain tongues have even invoked the looming threat of a ‘water war’ between Cairo and Addis Ababa.”

To address these differing agendas and avoid potential conflicts, the study authors first looked at how Ethiopia could still enjoy the benefits of the dam without disrupting the natural cycles of the Blue Nile downriver.

“The Blue Nile is a highly seasonal river,” explains Sterl. “The GERD’s reservoir is so large that it can store the river’s full peak flow and deliver hydropower at a stable rate throughout the year, removing the flow seasonality. This makes a lot of sense from the Ethiopian perspective, but it overhauls the natural timing of the water reaching Sudan and Egypt.”

After looking at many possible solutions, Sterl and his team zeroed in on a larger plan that would benefit Ethiopia and the other countries affected. This plan, the study notes, “boils down to massively deploying modern, clean solar and wind power to serve as a complement to GERD’s hydropower. More concretely: the researchers propose that Ethiopia and its neighbours [sic] deploy large-scale solar and wind farms, work towards a regionally integrated power grid, and then agree on Ethiopia operating GERD in synergy with solar and wind power.”

The study sums this position up in its conclusion, stating:

“We found that this could deliver fivefold benefits across the three countries: decarbonizing power generation in the Eastern Africa Power Pool; allowing compliance with Sudan’s environmental flow needs; optimizing GERD’s infrastructure use; harmonizing the yearly refilling schedules of GERD and Egypt’s High Aswan Dam; and supporting a strong diversification of Ethiopian power generation for domestic use and for Eastern Africa Power Pool exports.”

Such a broad-reaching solution works because, according to the study’s authors, it “would mean turbining [sic] less water on sunny and windy days, and more water during cloudy, windless spells and at nighttime, to ‘firm up’ the always-fluctuating solar and wind power.”

Sterl’s team reached this sweeping conclusion after analyzing how sunshine and wind typically have opposite seasonal profiles to the Blue Nile’s seasonal rhythms, stating, “in these places the sun shines brightest and the winds blow strongest during the dry season.” This natural, seasonal synergy, the study’s authors conclude, formed the basis for their findings.

“If GERD were operated to back up solar and wind power throughout the year, both hourly and seasonally, this would automatically mean producing less hydropower during the dry season, and more during the wet season, without negatively affecting GERD’s yearly average power output.”

This combination of wind, solar and hydro, the study says, means that “the water flowing out of the dam would then have a seasonality somewhat resembling the natural river flow, with a clear peak in the wet season.”

The Great Ethiopian Renaissance Dam itself is still years away from being completely filled and having its energy-generating turbines turned on, so if the three affected countries, primarily Ethiopia, are open to the suggestions made by Sterl and his team, there is still time to avoid any possible clashes over the project.

“You could call it a win-win situation,” said prof. Wim Thiery, a climate researcher at VUB and co-author of the study. “The entire region would benefit.”

Still, the study also notes that behind any agreement lies the more esoteric question of who, if anyone, should have such enormous control over the Nile. But if they can reach a deal based at least somewhat on the suggestions made in the recent proposal, Sterl sees a potentially fruitful situation for all parties involved.

“Essentially, [if our plan was followed] Ethiopia would have all the expected benefits of a big dam – but for Sudan and Egypt, it would look as if the Ethiopians only built a modest, relatively small reservoir. There are many such reservoirs already on the Nile, so no country downstream of Ethiopia could really object to this.”

Once operational, GERD is expected to provide 65 million Ethiopians with access to electricity. As of April 2021, it is still likely to take anywhere from 3 to 6 more years to fill completely.