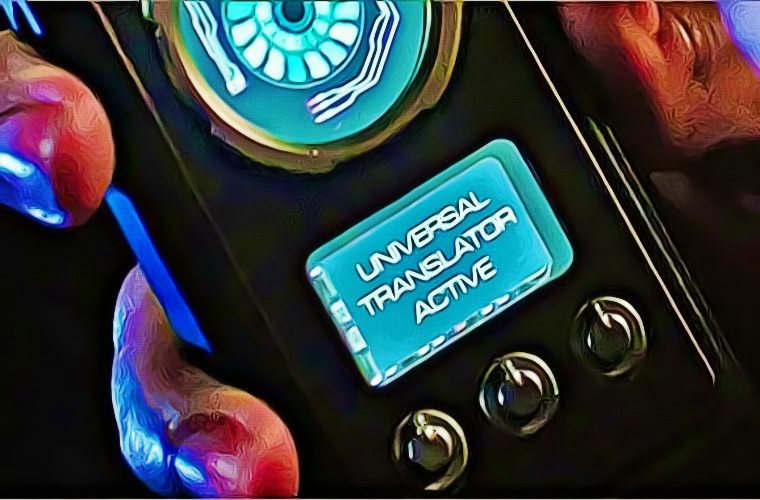 Universal Translators: Going Beyond the Meaning of Words

Captain Kirk, the Doctor (Who), and countless fictional space explorers have encountered alien life and used sci-fi gadgets like “universal translators” to communicate seamlessly with them. This technology allows for our characters to quickly jump from planet to planet and solve one species’ problem after another without having to spend a few days brushing up on the local language(s) using Rosetta Stone or Duolingo.

For most sci-fi stories, these translators fade into the background or go unmentioned at all so the plot can propel itself through the cosmos. If they are explicitly referenced, traditional translators largely focus on language, leaving emotion and body language up for interpretation. But imagine if a device could translate emotion or even personality in addition to language. And better still, imagine if it malfunctioned on a hostile planet.

In my novel, The Alien in the Backseat, the titular alien has such a device connected to his nervous system, allowing him to communicate with humans he encounters, but further still, he can mentally alter the personality with which the words are spoken.

As diverse as cultures on Earth are (one people’s peace sign is something else entirely elsewhere on the planet), we can at least recognize core similarities, social structures, facial expressions, and more. Encountering a new species with no shared experiences or environment introduces more complex communication issues. A true universal translator — with advanced emotion and personality features — could conceivably solve some of these issues, taking the guesswork out of tone, volume, whatever we use when “talking.”

It does not require too large a leap in logic to see that Artificial Intelligence could be used one day to learn and manage communication in this way. In fact, according to Oxford House, researchers and scientists are already working on ways to translate not just words and meanings in language but also the sentiment behind the words. At present they lack the nuance their human counterparts can imbue translations with, but perhaps such a leap is not too far off. Just seeing the large bounds in quality and sophistication that Google Translate has managed in the last decade should make us optimistic about the near future.

And if sci-fi has taught us anything, it’s that completely entrusting your life and comfort to thinking machines has never gone wrong.

Some astute readers — if any of you are still reading, I think you’re very astute! — may see some unintended consequences of allowing for a human or other being to mentally alter the personality with which words are spoken, or change the context behind the spoken words. If, as a pure hypothetical, I am a crotchety old man but wished to convince someone I was a debonair, sophisticated man of means, I need merely mentally flip the switch to “007” mode and the con is on! As with any technology, there will always be people who find ways to abuse it for their own gains.

Or imagine this example: I’ve traveled halfway across the galaxy, crash-landed on an unwelcoming planet while on the run from intergalactic meanies only to break my translator. I’ve been so reliant on this technology that without it, I’m helpless. Now what?

Imagine the possibilities! Or better still, read about them in my novel!

Phillip Knight Scott is the author of the best-selling The Alien in the Backseat, a humorous buddy road-trip novel featuring one human and one persnickety alien with the Earth’s very future along for the ride. He lives with his wife and five-year-old son in North Carolina, where he enjoys watching classic episodes of Doctor Who.