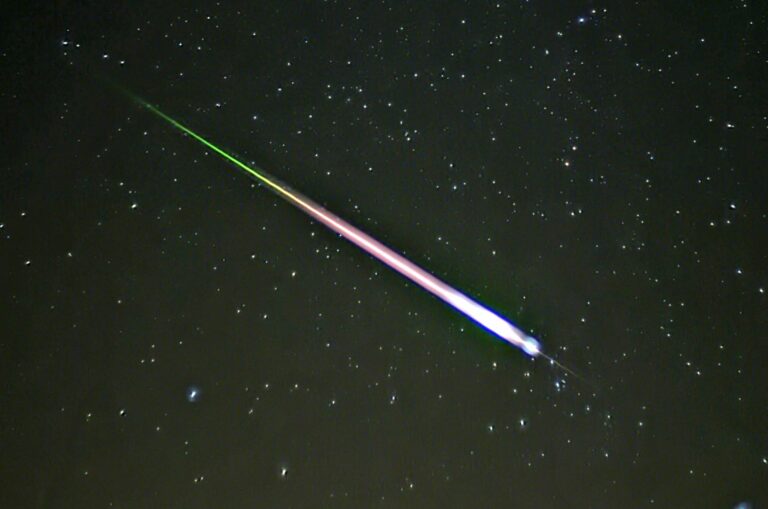 Skywatchers in New South Wales were treated to a brilliant display in the sky on the evening of April 7, 1978. An unusually bright fireball was seen coursing through the skies above Australia’s east coast with witnesses numbering in the hundreds.

Writing for Nature, Colin Keay later noted that “hundreds of people from the cities of Sydney and Newcastle… deluged the news media with telephoned sightings.” With all of the publicity the incident received, “19 were useful in defining the trajectory and ground track of the fireball,” Keay added.

Observations of meteors streaking through the sky—even peculiarly bright ones—aren’t that strange or uncommon, and nor had been the majority of the reports of the fireball over eastern Australia in 1978. However, among the many reliable observations of this incident were approximately fifteen reports which also described sounds associated with the fireball.

At a glance, the notion that bright meteors could make a sound as they burn their way through Earth’s atmosphere may not seem strange at all. Many of them do this, in fact, and particularly loud booming noises are sometimes associated with detonating meteors. The problem, however, has to do with the physics of sound in relation to observed meteor behavior; if one were to see a meteor explode some distance away as it broke apart in the atmosphere, the sound it produces may not be heard for several seconds or depending on the distance, perhaps even minutes later.

In the case of the 1978 fireball over Australia, more than a dozen reporters claimed to have heard hissing noises or sounds that some likened to humming or crackling sounds, which they could hear at the time they saw the meteor. This presents a problem on account of the fact that the meteor was traveling an estimated several tens of kilometers as it passed above New South Wales, which would have required any sounds it produced up to a minute or more to reach the ground where observers said they were able to hear it.

Add to this the fact that most meteors are of fairly short duration, which makes it unlikely that such an object would remain in the sky for long enough that observers would still be able to see it by the time the sound reached them.

The fact that such anomalous sounds appeared to be associated with meteors had not been missed on Keay, who followed his June 1980 Nature article with a follow-up in October titled “Anomalous Sounds from the Entry of Meteor Fireballs,” which focused on the sounds produced by the large fireball seen two years earlier. By the time he had gone over all of the available reports of observations of the meteor, Keay found that close to one-third of them described hearing sounds at the time they observed the object.

“An investigation of the phenomenon indicates that bright fireballs radiate considerable electromagnetic energy in the very-low-frequency (VLF) region of the spectrum,” Keay wrote in the paper’s abstract. From his research into possible reasons for noise associated simultaneously with the passage of bright meteors, Keay found that “Trials with human subjects revealed a very extended range of thresholds for the perception of electrically excited sounds among a sample population, particularly when the VLF electric field excites surface acoustic waves in surrounding objects.”

According to Keay, the range of human perception of very low-frequency sounds, “together with variable propagation effects and local conditions, can account for the sporadic distribution of reports of anomalous sounds from fireballs and auroras.” Additional corroboration for he called the “electrophonic” source for sounds associated with fireballs came nearly a decade later when Japanese researchers seemingly confirmed the generation of ELF/VLF radiation by fireballs.

This, along with more than 300 instances of electrophonic phenomena reported in association with not only fireballs but also aurorae and even lightning strikes, “may assist the full solution of the similar long-standing and contentious mystery of audible auroral displays,” Keay wrote in a 1991 paper.

The potential mechanisms for explaining the anomalous sounds associated with bright meteor fireballs proposed by Keay remain compelling several decades after they were first proposed and represent a unique component of what are otherwise well-understood celestial phenomena that remains mysterious.