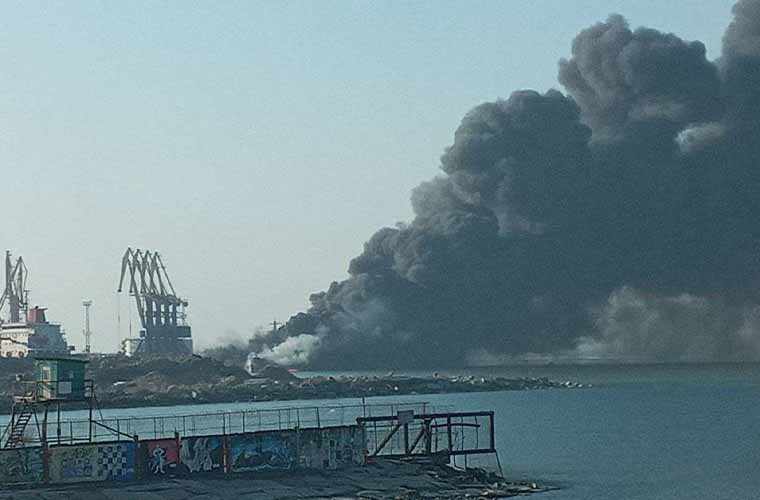 Here is The Debrief’s update of the conflict as of the morning of March 24.

As The Debrief earlier reported, the initial Russian campaign to seize major Ukrainian cities, including the capital of Kyiv, to force a regime change favorable to Moscow’s interest has culminated.

Russian forces appear to be digging into defensive positions in the northern area of operations and setting conditions for a protracted war of attrition.

In the southern area of operations, Russian leadership is likely still hoping to make a northward push to encircle and destroy most of Ukraine’s conventional military forces currently fighting along the Donbas line opposite Donetsk and Luhansk and under the aegis of the Joint Forces Operation (JFO). However, Russian forces’ chances of potential success in a northward push continue to diminish.

Ukrainian troops continue their obstinate defense of the besieged city of Mariupol, and block-to-block fighting continues. Russia has increased the use of artillery, drones, and naval guns to bombard the port town. However, Russian forces made limited to no gains on the ground in Mariupol over the last 24 hours.

As of March 24, forces along Russia’s three other northward thrust – toward Mykolayiv, Kryviyih Ryh, and Zaporizhiya – had not conducted any offensive operations in the past 72 hours.

In the past 24-48 hours, Ukraine has launched a series of counterattacks to regain territory occupied by Russian troops.

On March 22, Ukrainian forces liberated the town of Makariv, 25 miles west of Kyiv. Local Ukrainian officials claimed on March 23 that Ukrainian troops had encircled a large portion of Russia’s forces occupying territories near Irpin, Bucha, and Hostomel. The Mayor of Iripin said 80% of the city was now back under Ukrainian control.

The Debrief is unable to independently confirm Ukrainian officials’ claims. Based on all available evidence, including imagery and sourcing on the ground, The Debrief assesses Ukrainian forces appear to be conducting limited counterattacks on the area of Borodyanka, in a pincer move from Markariv and Piskivka, in addition to advances from Moshchun toward Demydiv. These movements suggest Ukraine is setting conditions for a larger counteroffensive to cut off Russian troops in the Irpin salient. However, a complete encirclement of these forces has not yet occurred.

On March 23, the Ukrainian General Staff reported that Ukrainian troops had repelled an advance on Teterivsk, roughly 45 miles northwest of Kyiv. This was likely an attempt by Russia to stop Ukrainian forces from cutting off supply lines to troops in the Irpin salient. The successful block of this advance makes the potential for an eventual Ukrainian envelopment of Irpin, Buch, and Hostomel more likely.

On March 23, U.S. officials at the Pentagon said Ukrainian counterattacks had pushed back Russian forces roughly 10 miles east and northeast of Kyiv. Based on this information, The Debrief assesses it is likely that the Russian 6th Guards Tank Regiment has been destroyed, and the 90th Guards Tank Division is nearing combat ineffectiveness.

On March 21, Russian-state media outlet RT posted a video showing the Alligator-class landing ship of Russia’s Black Sea Fleet, the Orsk, docked at the occupied port of Berdyansk on the Sea of Azov, roughly 40 miles west of Mariupol. A BTR-80 amphibious armored personnel carrier is seen being unloaded from the Orsk in the video.

Russian State-media outlet Tass further bragged that the Orsk was the first Russian warship to arrive at the port of Berdyansk, which was now being used as a logistics base for Russia’s southern area of operations.

“The arrival of the large landing craft at the port of Berdyansk is an epic event that opens up opportunities for the Black Sea in terms of logistics by using the port of Berdyansk infrastructure to the full extent,” an unnamed Black Sea Fleet officer was quoted by Tass. “The large landing craft of the Black Sea Fleet has arrived and is unloading, in front of your eyes, armored personnel vehicles that will reinforce our grouping.”

Early morning March 24, Ukrainian forces appeared to have conducted a strike on the Orsk, still moored at Berdyansk.

Videos uploaded online showed the ship engulfed in flames, with plumes of black smoke pouring skyward. The sounds of small-arms ammunition cooking off from the fire could be heard in some videos.

On Facebook, the General Staff of the Armed Forces of Ukraine posted an image of the burning vessel saying, “A large landing ship “Orsk” of the Black Sea Fleet of Russian occupants was destroyed in the temporarily captured Russian port of Berdyansk. There will be more! Glory to Ukraine!”

As of March 24, Russia’s top military leaders, Defense Minister and Army General Sergei Shoigu and Armed Forces Chief of Staff General Valery Gerasimov, have not been seen in public for nearly two weeks.

The last time the head of the Russian Defense Ministry appeared in public was March 11, when Shoigu presented awards to Russian troops who took part in the “special military operation” in Ukraine. Shoigu is noted for being very active in the media, and before March 11, he appeared in the news almost daily.

Exactly why Russia’s top military leaders are missing in action as Russia wages its most extensive military campaign since World War II aren’t clear. As Russia’s Ukraine invasion stalls, however, other signs of dissent over Putin’s leadership.

In an interview on Russian TV, Igor Girkin, a former Colonel in Russia’s Security Service (FSB) and “Defense Minister” of the so-called Donetsk People’s Republic, said Russia had made a “catastrophic incorrect assessment” of Ukraine’s forces.

In a shockingly accurate assessment of the situation, Girkin described how Russian forces had become “practically stuck in almost all directions… by the end of the second week.”

“I don’t understand how one could plan a wide strategic operation without any understanding of the operative situation, that is, assessing our own forces, those of our enemy, and other factors,” said Girkin somberly. “It seems [Russia] overestimated its own forces and underestimated the enemy if it even estimated their capability at all.”

During the 2014 invasion of Ukraine, Girkin served as Putin’s point man on the ground and arguably the person most responsible for the war in the Donbas.

In a 2020 interview, Girkin admitted occupied Donbas had become “a dump,” and the situation in the separatist’s regions was “worse there than in either Russia or in (government-controlled) Ukraine.”

“The top Russian intelligence official in charge of overseeing the recruitment of spies and diversionary operations in Ukraine has been put under house arrest along with his deputy,” Soldatov told the New York Times.

On March 18, The Debrief reported the Deputy Commander of the Russian National Guard, General Roman Gavrilov, had been fired. Gavrilov’s sudden ousting was particularly surprising given he had previously served as a member of Putin’s personal security team.

Assignment to the Presidential Regiment of the Federal Protective Service (FSO) has long been a springboard for advancement, with many of Putin’s former bodyguards transitioning into high-ranking positions in the military and government.

Amidst the fog of war, it is impossible to know how many losses the Russian military has endured. However, by all indications, Russia’s current losses are staggering.

On March 24, the General Staff of the Armed Forces of Ukraine said an estimated 15,800 Russian soldiers had been killed. The Debrief cannot independently verify any of these claimed casualty numbers.

As of March 24, the open-source intelligence site Oryx had verified 1782 pieces of Russian military equipment had been destroyed, damaged, or abandoned. Of that figure, 652 pieces, including tanks and sophisticated air-defense systems, had been captured by Ukraine.

Russia will likely continue to use stand-off artillery, missile, and aerial bombardments against the Ukrainian cities of Sumy, Kharkiv, Chernihiv, Mariupol, Mykolaiv, Zaporizhia, Kryviyih Ryh, and Kyiv. The threat to civilian casualties in these significant population centers remains exceptionally high.

Ukrainian forces will continue to set conditions to launch a major counteroffensive in western Kyiv Oblast in the next 48-72 hours. If successful in encircling Russian forces near Irpin, Bucha, and Hostomel, this would represent the most significant development in the overall course of the war so far.

Russian forces will continue to attack Mariupol, likely capturing the city within the coming weeks.

As the invasion of Ukraine continues to stall, the likelihood of Russia using biological or chemical weapons increases. There are some indications that Russia may be considering using chemical weapons, including sarin gas, to expedite the capture of Mariupol.

The Debrief assesses the risk of chemical weapons use is additionally possible in the Ukrainian cities of Mykolaiv and Zaporizhia, along with Kyiv and Chernihiv oblasts.