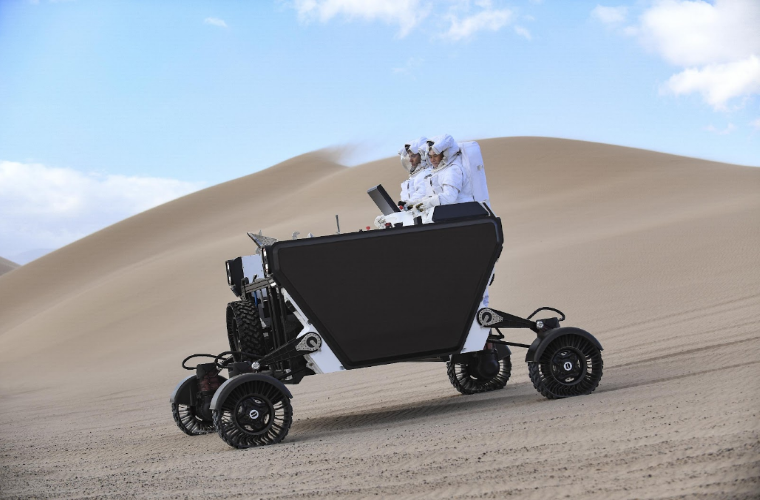 Commercial space venture Astrolab has released a video of its cutting-edge moon rover concept vehicle undergoing real-world testing. Dubbed FLEX, or Flexible Logistics and Exploration, the new rover is part of a push by the private sector to offer NASA and other space agencies off-the-shelf options instead of vehicles and equipment custom-built for each individual mission.

CUSTOM-BUILT ROVERS ARE TOO EXPENSIVE FOR LONG TERM SETTLEMENT

Since the early days of space travel, the enormous costs and challenging nature of the undertaking meant that nearly every piece of equipment had to be custom-built for each specific mission. This situation led to some unexpected cost overruns, including a famously overpriced space toilet. Even as recently as 2020, NASA was spending $23 million to redesign the toilet on the International Space Station.

However, as the frequency of trips to space increases and more nations (and companies) are entering the space venture marketplace, new technology will become increasingly important to work across varied missions. With the demonstration of their new FLEX rover, Astrolab is hoping to show NASA they can do just that.

ASTROLAB FLEX IS NOT YOUR PARENTS’ ROVER

“As we transition from the Apollo era, which was focused on pure exploration, to now, where people will be living for longer periods on the moon, the equipment needs to change,” said Canadian astronaut Chris Hadfield, who serves as an advisor to Astrolab. “When we settle somewhere, we don’t just need to get people from one place to another, but we need to move hardware, cargo, life support equipment, and more.”

According to the company’s website, the FLEX rover looks to meet the challenges of a permanent moon presence via its adaptability to many uses and configurations. This includes the ability to pick up and deposit modular payloads in support of robotic science, exploration activities, on-site logistics, site survey/preparation, construction, resource utilization, and “other activities critical to a sustained presence on the moon and beyond.”

The new rover is also designed to transport astronauts (in their own pressure suits) two at a time, which the company notes is in line with NASA’s Lunar Terrain Vehicle (LTV) requirements.

“We’ve designed a mobility platform that is payload agnostic so it can work within an ecosystem of transportation systems, vehicles, and tools,” said Jaret Matthews, founder and CEO of Astrolab in a release. “FLEX achieves a wide range of utility by being able to collect, transport, and deposit any payload that conforms to what will be a standard and open interface.”

The company doesn’t provide a timeline for when its vehicle will become an official contractor for NASA. But given the impressive pedigree of the founding team behind the venture, which includes NASA, JPL, and SpaceX veterans and the aforementioned astronaut Hadfield, the company is extremely optimistic.

“For humanity to truly live and operate in a sustained way off Earth, there needs to exist an efficient and economical transportation network all the way from the launchpad to the ultimate outpost,” said Matthews. “There is a gap in the last mile and Astrolab exists to fill it.”