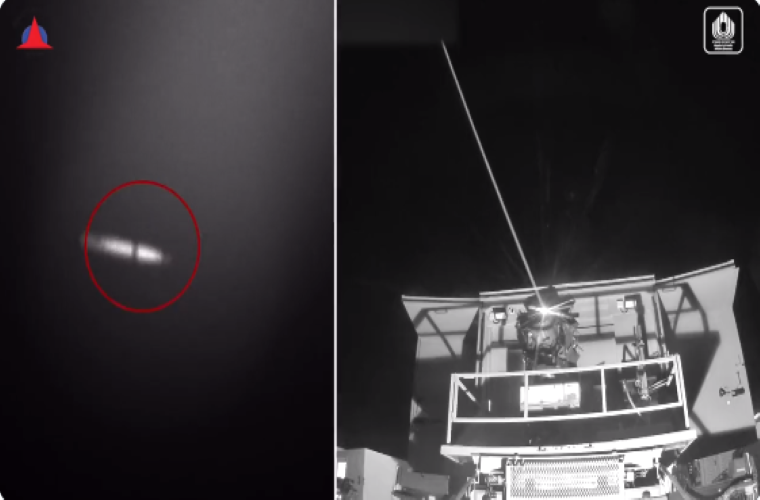 A video tweeted out by the Israeli prime minister shows their Iron Beam laser system blasting an unpiloted drone from the sky. Designed to complement the country’s Iron Dome missile defense system, which uses costly missiles to intercept incoming rockets (and other ordinance), Iron Beam uses a 100-kilowatt laser that costs mere pennies to fire.

ISRAEL IS UNDER CONSTANT THREAT

Due to its proximity to hostile nations and other paramilitary organizations, Israel is under constant threat of attack. Such aerial assaults range from cheap mortars and off-the-shelf drones to sophisticated missiles like those owned by regional neighbor Iran.

Last May, Hamas launched over 100 mortars and missiles into Israel. Iron Dome intercepted some of these attacks, but many of the munitions made it through, killing Israeli civilians. Proponents of Iron Beam say their laser could be helpful in these situations, particularly as a complement to the Iron Dome system.

“Israel has successfully tested the new “Iron Beam” laser interception system,” reads the tweet by Israeli PM Naftali Bennett. “This is the world’s first energy-based weapons system that uses a laser to shoot down incoming UAVs, rockets & mortars at a cost of $3.50 per shot.”

“It may sound like science fiction,” the PM adds, “but it’s real.” 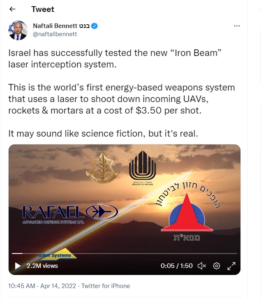 The video is short but potent, showing how the system’s powerful laser can cut the wing off of an aerial drone within seconds.

Appearing on Israel’s I24 News, Dr. Uzi Rubin, the founder of Israel’s Missile Defense Organization, said the test was successful. But Rubin also cautioned that a lot of work remains before Iron Beam could completely replace Iron Dome.

“This is not a single bullet,” said Rubin. “It is not going to replace Iron Dome. It is going to supplement and reduce the cost of the battle.”

To highlight his point, Rubin recalled the Hammas attacks of the previous year.

“In a situation like last May, where you had salvos of hundred and twenty hundred and thirty rockets all coming at the same time, you can assign some of them to Iron Beam, and most of them to the Iron Dome, and save some Iron Domes,” he explained. “You reduce the cost of your total kill, so it is a great weapon.”

That cost reduction is a significant part of the driving force behind Iron Dome. A 2020 story by the National Interest explained that a single missile salvo from Iron Dome could cost upwards of $150,000, whereas a shot from the Iron Beam missile would cost at most a few hundred dollars.

“Lasers have an advantage of very cheap interception,” Rubin told I24. “I mean, to kill a target, it cost you a few pennies instead of 50,000 dollars. But the laser itself is very expensive. So it is a question of cheap guns firing expensive bullets, (or) the expensive gun firing cheap bullets. So the battle economy is not that straightforward.”

As for Iron Beam’s limitations, Rubin notes two significant ones. The first is something humanity cannot yet control.

“Weather is a limitation,” he said, noting that in the north of Israel near Hezbollah, there are anywhere from 40 to 60 days of rain each year. “That’s more than two months (the system will be compromised) if you add to that cloudy days.”

“The laser works at the speed of light, but it doesn’t kill at the speed of light,” said Rubin. “You can see it takes time to kind of cut the wing of the RPV, the remotely piloted vehicle.” In the case of the recent video, about four seconds pass between the laser firing and the RPV being compromised enough to fall from the sky.

“What was demonstrated today is a 100kW laser, which is very powerful, but not powerful enough yet, in my opinion,” said Rubin. “The United States is developing now a 300kW laser, based more or less on the same technology.”

For now, the system’s power is enough to shoot down drones and mortars, and Rubin feels it should concentrate on those threats.

“I don’t see the system being very useful for something that comes from Iran,” he said. “It’s a big missile with a lot of thermal protection to protect against lasers. So, we are not there yet. Maybe in the future.”

Still, Rubin noted that the system is highly mobile, particularly when compared to early designs of Iron Beam, which required “buildings full of chemicals” to operate. As demonstrated, Iron Beam works from the back of a truck.

Although the Israeli Prime Minister mentioned no definitive timeline for deployment at the time of the test, The Debrief reported last month that Israeli officials expect to begin deploying Iron Beam systems to forward positions by the end of this year.

When asked by I24 when Israelis might see a fleet of Iron Beams put into broader use, Rubin initially demurred.

Ultimately, the former official explained that given the prototype’s success, a timeline for wider deployment mostly depends on how long it takes to manufacture more laser systems and how much that will cost.