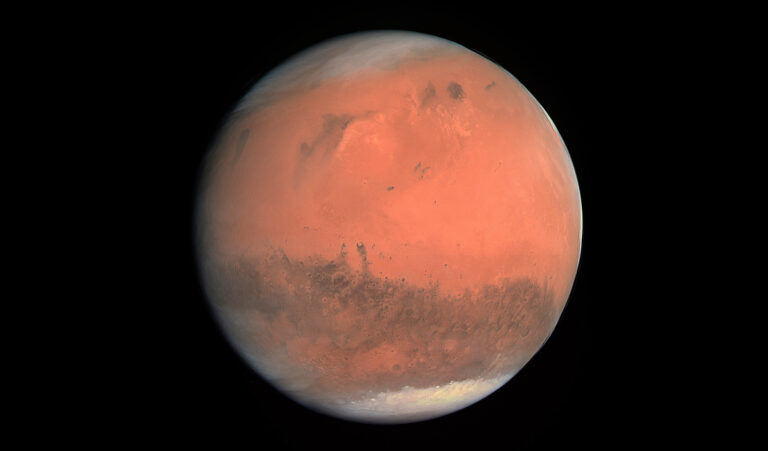 A brand new study significantly strengthens the case for lakes of liquid water beneath the polar ice caps of Mars. Previous readings taken in 2018 had initially sparked enthusiasm that water may currently be present underneath the frozen ice caps of Mars, but follow-up studies cast doubt on those conclusions. Now, this new data seems to back up those initial results, adding even more evidence to the concept that Mars may be geologically active enough to maintain lakes of liquid water beneath its polar ice caps.

To make their case, a research team led by the University of Cambridge used laser altimeter measurements taken by NASA’s Mars Global Surveyor satellite to map out the polar ice caps’ upper surface. This effort revealed subtle patterns in the surface’s height and shape that was a perfect match for modeled predictions regarding how a sub-surface lake would affect the shape of an ice cap.

This is particularly important because back in 2018, the European Space Agency’s Mars Express used ice-penetrating radar on those same Martian polar ice caps and found that the signal being reflected back indicated they had liquid water underneath and were not made of solid ice as was expected due to the planet’s extremely cold climate. This also went against current geological models of Mars since the only way the red planet could only have liquid water underneath these ice caps is if it is more geologically active than expected.

Before long, a follow-up analysis of the Mars Express data revealed that the ice-penetrating radar signals could have been generated by other dry materials found on Mars and didn’t necessarily mean that there was liquid water. So, critics argued, unless Mars was more geologically active than expected and able to generate the heat needed to keep water in a liquid form, the case for present-day Martian lakes was becoming weaker.

However, this latest research, which relies on a completely different set of instruments and readings, once again makes a strong case that Mars does indeed have liquid water lakes underneath its ice caps and that the planet is likely more geologically active than previously thought.

“The combination of the new topographic evidence, our computer model results, and the radar data make it much more likely that at least one area of subglacial liquid water exists on Mars today,” said Professor Neil Arnold from Cambridge’s Scott Polar Research Institute, who led the research,” and that Mars must still be geothermally active in order to keep the water beneath the ice cap liquid.”

The results of the Cambridge team’s work, which also included researchers from the University of Sheffield, the University of Nantes, University College, Dublin, and the Open University, are published in the journal Nature Astronomy. In that paper, the team describes how they used measurements of ice caps here on Earth to build computer models to reveal how the surfaces of those caps are shaped by the undulation of the water lakes underneath them. Next, the team adapted these models to the conditions on Mars, plugged in the laser altimeter data from Mars Global Surveyor, and voila! The undulations found on the surface of the ice caps on Mars matched their predictions perfectly.

A War Putin “Cannot Lose”: Latest on the Invasion of Ukraine

“The quality of data coming back from Mars, from orbital satellites as well as from the landers, is such that we can use it to answer really difficult questions about conditions on, and even under the planet’s surface, using the same techniques we also use on Earth,” explained Arnold. “It’s exciting to use these techniques to find out things about planets other than our own.”

The team’s findings are particularly critical at a time when NASA and the world’s space agencies have seemingly shifted their focus from general astronomy to a more concerted hunt for extraterrestrial life. And given the proximity of Mars to other solar system life-hunt targets like Jupiter’s moon Europa or Saturn’s moon Enceladus, these new findings, combined with those radar readings from 2018, could play a critical role in planning future missions to the red planet.