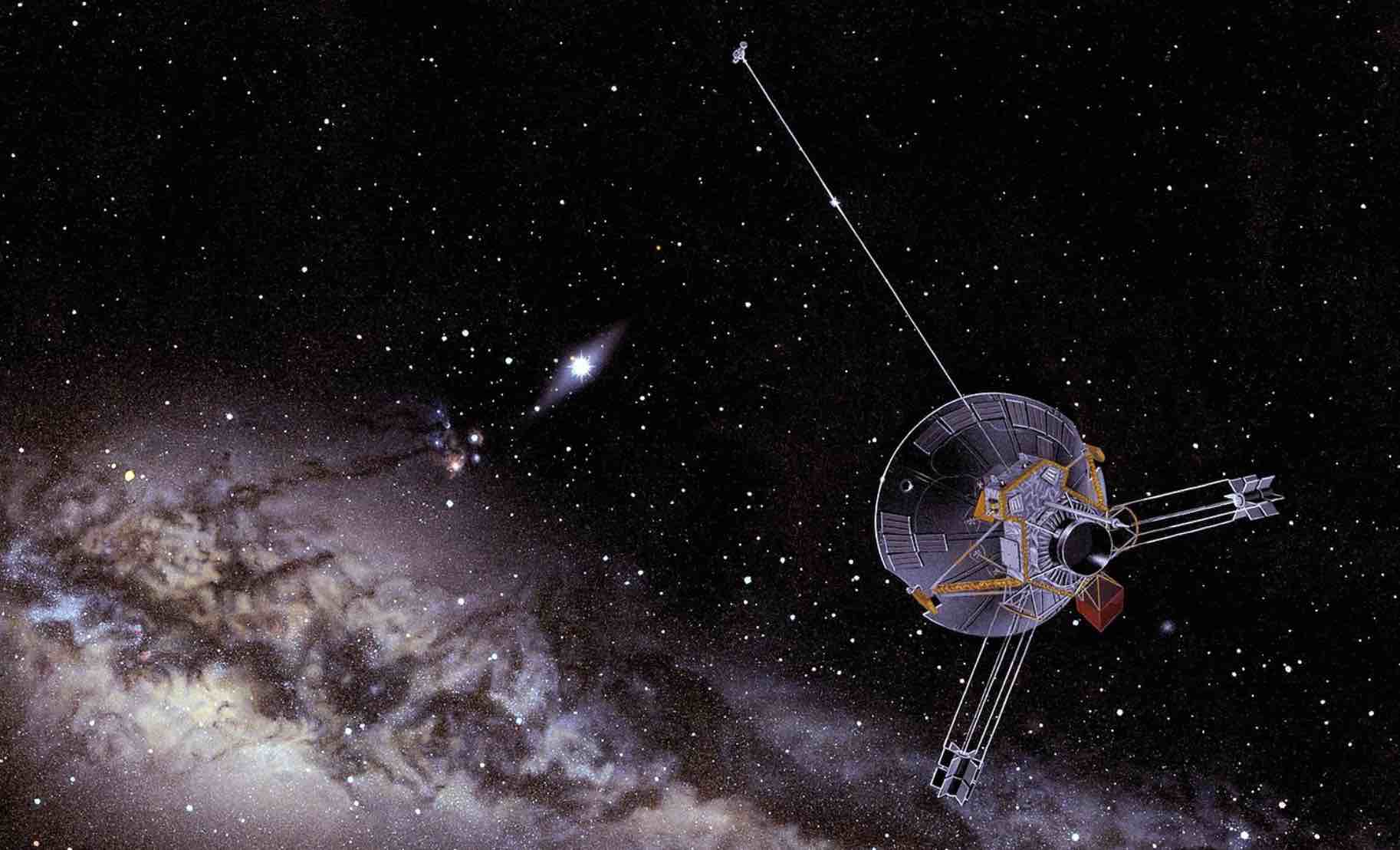 When It Comes to Interstellar Travel, There Are Both Hazards and Benefits

We do not know the nature of five-sixths of the matter in the Universe. We label it “dark matter” to reflect our ignorance. The lack of knowledge is not restricted to the cosmos at large but also applies to our immediate cosmic neighborhood.  Conventional wisdom holds that dark matter is made of elementary particles that have merely gravitational interactions with ordinary matter. In that case, dark matter flows freely through our bodies right now.

The local mass per unit volume of dark matter is 21 orders of magnitude lower than that of air. But as rarefied and non-interacting as dark matter is, its gravitational influence is important on large scales. The outer boundary of the Solar system, located at a hundred thousand times the Earth-Sun separation, contains a total mass of dark matter a few times larger than the mass of Jupiter. On the distance scale of the nearest stars, dark matter starts to make a major contribution to gravity.

As a result, the exact trajectory of interstellar probes on their path out of the Solar system will be affected by invisible matter. It would be impossible to aim a spacecraft like a dart toward an interstellar target because of the unknown distribution of invisible matter. Last month, NASA targeted the asteroid-moon Dimorphos with the DART spacecraft that hit the bull’s eye. DART did not need to account for course corrections from dark matter because its target was nearby, merely 6.8 million miles away. But spacecraft aiming at interstellar targets a million to a billion times farther will need an engine to make course corrections as a result of the gravitational influence of invisible matter.

This navigation challenge is a blessing in disguise. Monitoring the precise gravitational acceleration of a distant spacecraft through laser communication with it could be used to map the distribution of dark matter. An interstellar probe would also test theories of modified gravity, like Modified Newtonian Dynamics (MOND), in which dark matter is absent, but gravity acts differently at low accelerations.

At a distance that is ten times farther than the nearest star, an interstellar spacecraft is likely to encounter a black hole, remnant from the collapse of a massive star that exhausted its nuclear fuel. There should be of order a hundred million rogue black holes wandering through the Milky Way galaxy. They are dark and threatening as if they were stellar corpses in a Galactic Halloween.

In a paper I published five years ago with my former graduate student, Natalie Mashian, we suggested that a subset of the Galactic black holes, which have a normal star as a companion, would be detectable by the Gaia star-mapping spacecraft as the star would dance periodically with a dark partner on the sky. Just as in real life, we sometimes learn about the existence of an invisible partner of a neighbor from what the neighbor does. This proposal just came to fruition. Over the past month, two independent teams reported (here and here) the discovery of a new black hole through the motion of its visible companion in Gaia data.

But the majority of black holes have no companion. Hence, a spacecraft cruising through interstellar space could serve as the complementary detector of rogue, single black holes through their gravitational influence on the probe’s trajectory. The discovery potential would be enhanced if the dark matter itself is composed of primordial black holes.

There are also some longshot benefits to interstellar travel. If dark matter is engineerable, it could be harvested as fuel for propulsion. And even better, a spacecraft made of dark matter would possess the ultimate camouflage, as it would be invisible to predator civilizations made of ordinary matter. Serving as the ideal chameleon, a dark matter craft would be indistinguishable from nature. It could pass through air at high speed without creating a fireball or through water without creating a splash. We would never notice it since it will not interact with light. The craft could pass seamlessly through Earth and pop out of the ocean on the other side of Earth in less than an hour, just as a result of gravitational acceleration with no extra propulsion whatsoever.

Crafts made of ordinary matter do not share this benefit. Even neutrinos have significant interaction with ordinary matter. The Sun is transparent to the neutrinos it produces via fusion reactions in its interior. But at ultra-high energies, the Sun, the Earth, and the Moon are opaque to neutrinos, allowing physicists to seek their signals.


In this inaugural installment of "Our Cosmic Neighborhood", Avi Loeb gives us perspectives on the challenges presented by any future attempts at communication with extraterrestrials.

When I enter an unexplored forest, I often notice creatures that I had never imagined looking through the windows of my home. Similarly, as we venture into interstellar space, we are likely to discover things that we never anticipated based on our limited experience in the Solar system. We already have a teaser for this experience. Among the four objects known to enter the Solar system from interstellar space, only Borisov appeared like a familiar comet. The two interstellar meteors, IM1 and IM2, are rarer than a part in ten thousand in material strength relative to solar system meteors, and `Oumuamuahad a thin flat shape and was pushed away from the Sun without showing a cometary tail. A paper I wrote with my student, Amir Siraj, showed that interstellar objects outnumber Oort cloud objects. The Oort cloud can be regarded as a rarefied cloud of rocks moving through a dense swarm of interstellar objects. What is the nature of this swarm, and where did these interstellar objects come from? The Galileo Project aims to figure out the answers.

If the Galileo Project instruments will detect probes with artificial intelligence (AI) and communication skills from another civilization, it would be worthwhile to gather information on whether there is anything to watch for in the space they came from. This would resemble a casual exchange between tourists who cross paths. An extraterrestrial craft could inform our interstellar AI probes which location to avoid at risk of being swallowed by a black hole and which location to favor in hope of joining a local party with a peace-loving civilization.

Here’s hoping that our AI descendants will have the opportunity to join such parties and raise a glass in celebration of extraterrestrial intelligence.