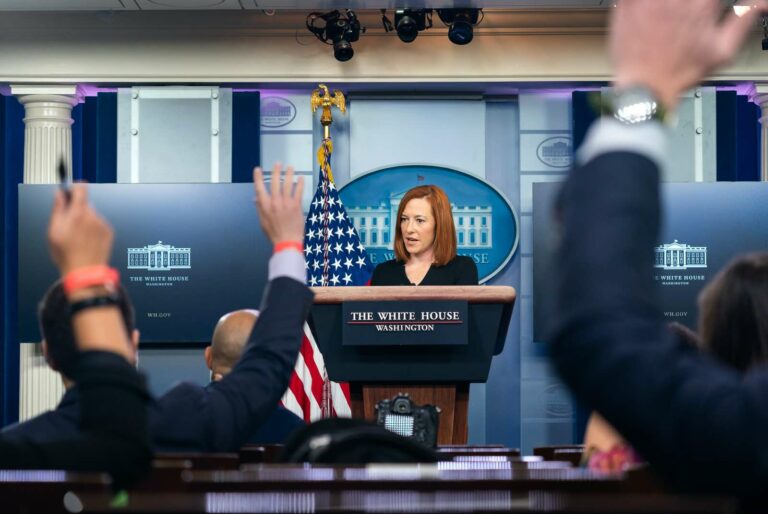 The White House acknowledged current efforts by the Office of the Director of National Intelligence (ODNI) to produce a report on unidentified aerial phenomena, more commonly known as UFOs, during a press briefing on Tuesday.

“The giggle gives away — I don’t know what this question is. We’ll see,” Psaki said as one of the members of the press began to raise the topic of unidentified aerial phenomena.

“It is quite a serious issue,” the reporter said. “There are these unrecognized objects in U.S. airspace that are also known as unidentified aerial phenomenon, I understand. And I wanted to see—there is a DNI report that I understand is going to be released soon—can the Biden administration commit to releasing it in full?”

“Well, that would be for — a decision by the Department of National Intelligence to make,” Psaki responded.

“As you noted, we’re aware of the report requirement,” Psaki told reporters, “and our team at the Office of the Director of National Intelligence is, of course, actively working on that report.  And we take reports of incursions into our airspace by any aircraft identified or unidentified very seriously and investigate each one.”

“But ODNI would be working on that report.  And in terms of disclosure, that would be up to them,” added Psaki, who appeared to occasionally refer to notes on the topic while providing her statement.

Further pressed by the reporter as to whether Psaki could “characterize the President’s concerns about this phenomenon,” and also what might be “the concern of the President that these phenomena seem to occur,” Psaki acknowledged that the Biden White House supports the current efforts of the ODNI to produce its report on UAP.

“Certainly, the safety of our personnel, security of our operations, our airspace are of paramount concern, whether that is identified or unidentified aircraft,” Psaki said, after emphasizing that the forthcoming report itself represents the level of concern and interest the Pentagon has regarding the UAP issue.

“And we don’t discuss that publicly for a range of reasons,” Psaki added, “but certainly the President supports the ODNI putting together a report and following through on that commitment.”

A complete transcript of the press briefing was subsequently made available at the White House website.

Psaki’s statement on Tuesday provides a measure of clarity on the White House’s position on an issue that has seen unprecedented attention in recent days, following the airing of a 60 Minutes segment which detailed U.S. Navy pilot encounters with unidentified flying objects.

Last week, when asked about the UAP issue and former President Barack Obama’s recent comments about it during a press conference held jointly with South Korean President Moon Jae-in, President Biden merely quipped “I would ask him again.”

Obama’s comments were made during an appearance on The Late Late Show with James Corden last week, where he acknowledged “that there is footage and records of objects in the skies that we don’t know exactly what they are.”

“We can’t explain how they move, their trajectory,” Obama told Corden and musician Reggie Watts. “They did not have an easily explainable pattern. And so I think that people still take seriously trying to investigate and figure out what that is.”

It had not been the first time that Obama had been asked about UFOs in recent months. During a lengthy interview in November with Stephen Colbert, Obama was pressed by the comedian as to whether he inquired about UFOs during his tenure in office.

Obama told Colbert that he “certainly asked about it,” later adding that “it used to be that UFOs and Roswell was the biggest conspiracy. And now that seems so tame, right? The idea that the government might have an alien spaceship? That’s nothing.”

Although Obama has frequently made light of the UAP issue in the past, during his appearance with Corden last week he emphasized that he was being serious, after making similar brief comments which appear to mirror statements confirming that he asked about the issue while in office.

During a 2015 appearance on Jimmy Kimmel Live! Obama told Kimmel that he “can’t reveal anything” about his inquiries into the subject. While in office, Obama was also the first U.S. president to publicly acknowledge Area 51, a remote U.S. Air Force facility in the Nevada Test and Training Range that, due to its high security status, is often the subject of speculation about UFOs.

In June, the Navy’s UAP Task Force is scheduled to submit its findings on unexplained aerial phenomena to the Senate Intelligence Committee. It remains to be seen if the report will arrive in time for its 180-day deadline, or whether it will contain a classified annex that limits public access to portions of the complete report.