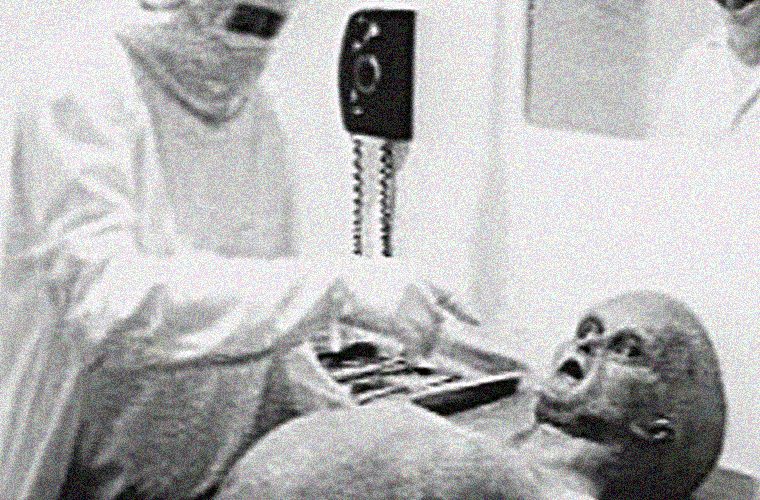 
Creator Claims the CIA Authenticated the Film. They Didn't. But Who Cares Right?

Few if any pieces of alleged extraterrestrial “evidence” are as well known or as controversial as the “Alien Autopsy” film released in 1995, which supposedly depicts the autopsy of an alien that crashed on a ranch just outside Roswell, New Mexico, in August of 1947. You can now own the “Alien Autopsy NFT” for a cool $1,000,000, proving that the 90’s never really went away.

The NFT auction house Rarible is listing “a mind-blowing NFT of a frame from the film.” And according to the press release, the winner of the auction will receive the digital file and a physical frame from the original film.

Adding fuel to the controversy fire, Ray Santilli, the creator of the autopsy film who admitted in 2006 that his version was a “re-enactment” of an allegedly still unreleased, authentic alien autopsy, is stating that both the original, unreleased film and the crashed Roswell occupant it supposedly depicts have recently been confirmed by the CIA as being authentic.

“The debate over the existence of extraterrestrial life was settled when the CIA authenticated the most famous piece of UAP evidence, the Alien Autopsy film,” the press release reads. “Now for the first time ever, a piece of that history is available to own.”

Background: The Alien Autopsy Film Is Now an NFT?

NFTs (non-fungible tokens) are specialized, encrypted digital tokens. Any digital file, like an image, 3D rendering, or even footage of an alleged dead alien, can be duplicated. However, when that digital file is “minted” as an NFT, that file becomes secured in a digital infrastructure called a “blockchain.” Even though copies can be made, the buyer of the NFT owns the original version of that file they purchased and can prove it.

When London-based entrepreneur Ray Santilli first released the 17 minutes of grainy, black and white footage almost three decades ago as part of a Fox TV special hosted by Star Trek alum Jonathan Frakes, it fell under immediate scrutiny. Several flaws in the equipment, methods, and manner of those performing the autopsy were immediately highlighted. Although the special ran three times on Fox in 1995 (with one airing garnering nearly 12 million viewers), most experts ultimately concluded it was a fake. Eventually, the team that made the film, dead alien puppet and all, came forward and admitted their involvement.

Shockingly, Santilli himself confirmed as much in 2006, claiming that the film shown in 1995 wasn’t the actual autopsy footage, but instead a re-enactment of a real alien autopsy film he had seen for himself three years earlier. Santilli also claimed that the original, unedited film shows both the alien autopsy and the wreckage of the crashed alien craft. It is a clip of this original, previously unseen 1947 film that Santilli and Rarible are supposedly offering, along with the digital NFT.

“I have lived with this film and the story surrounding it for 30 years,” Santilli said in the release. “When I first saw the CIA papers with their verification of the Roswell event and Alien Autopsy film, a massive weight was lifted from my shoulders. I believe the technology we enjoy today started in 1947 with the Roswell crash and that the NFT and single film frame being offered is by far one of the most valuable items to even come up in auction.”

Analysis: the Alien Autopsy NFT Can’t Possibly Be Real, Can it? Nope. We checked…

Although excitement around the Alien Autopsy footage has quieted down since Santilli’s 2006 admission, the auction announcement claims that more recent events have ended the debate on the film’s authenticity, stating unequivocally that “a leaked memo was obtained by aerospace billionaire Robert Bigelow that proved the film’s provenance.”

That memo supposedly originates from the archives of the late NASA astronaut and UFO enthusiast Edgar Mitchell, who was part of Bigelow’s now-defunct National Institute for the Discovery of Science (NIDS), a precursor to Bigelow Aerospace Advanced Space Studies, which in 2008, won a $22 million government contract to investigate UFOs and the paranormal for the Department of Defense.

Rarible’s press release also points to a 2001 report by CIA scientist and fellow NIDS affiliate Dr. Christoper “Kit” Green after his own alleged viewing of the film at the Pentagon. Green, a respected physician who has a long and head-scratchingly bizarre connection to Ufological history, wrote, “The Alien Autopsy film/video is real, the alien cadaver is real, and the cadaver seen in the film/video is the same as the photos Kit saw at the 1987/88 Pentagon briefing.”

Green has since changed his opinion on the matter.

“These are far from “Official” CIA documents,” Green told The Debrief. He explained that the report was based upon a series of comments he made in emails sent in 2001 that were “private” and never meant for publication.

Green went even further, noting that, “I have asked often for it to be retracted, because these all were written before I learned I was never finally actually shown anything classified about the autopsy in question, and were years long after I resigned from [the] CIA in 1985.”

As far as Green’s current opinion regarding the authenticity of the alien autopsy film, he told The Debrief, “I have learned the original autopsy film I saw was not original, and further review has convinced me it was not credible. My first impressions I have long since publicly stated were incorrect. I take credit for being mistaken and apologize.”

“The film has not been authenticated by the CIA or anyone else for that matter,” Mantle told The Debrief. “The documents that Ray Santilli is referring to is a private email thread that appeared online in 2019 and involves a former CIA employee Dr. Christopher ‘Kit’ Green.” Mantle explained that the email thread from 2001 was an internal discussion within Bigelow’s NIDS organization concerning the autopsy film.


New details have emerged about a 2004 incident involving U.S. Navy personnel who observed an unidentified object following their vessel.

“At the time, Green and colleagues thought it was authentic. They have since retracted that and are of the opinion that it is fake,” Mantle stated.

Many have said that the entire NFT market is a scam and a “get rich quick scheme,” so a still frame of a “real” dead alien for a million dollars may just prove critics right. All it takes is one fool who is easily parted from their money, and a long-forgotten alien hoax may rise from the cold operating table back to life.

Selling a frame of a previously debunked film would seem to offer little to entice would-be bidders. Still, the claim that a frame from the original, “authentic” alien autopsy film will be included with the NFT may actually create some bidding traffic (not to mention a short 72-hour bidding window that may prevent less informed bidders from sufficiently vetting the item’s authenticity).

While it seems bizarre that a team of scientists in 2001 were gullible enough to believe Santilli’s film was legitimate, it goes to show the seductive power UFOs have on people. If Santilli can sell his NFT for the 450 Etherium (a little over one million bucks USD) he is asking for, it will undoubtedly prove what The X-Files has been saying all along, we “want to believe.”