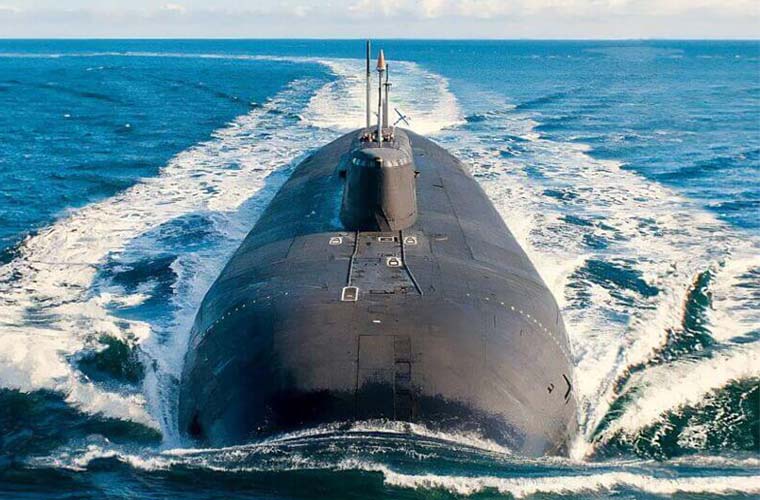 With The Belgorod, Russia Bulks Up its “Other,” Secret Navy

Earlier this month, Moscow announced the commissioning of the world’s longest known submarine, the K-329 Belgorod.

During the Belgorod’s commissioning ceremony at the port of Severodvinsk, officials from the Kremlin and ship-builder SevMash touted the sub as a sophisticated research vessel designed to perform “diverse scientific expeditions and rescue operations in the most remote areas of the world’s oceans.”

Many Western naval experts quickly pointed out the behemoth submarine’s “research” designation was, at best, a clumsy double entendre. At worst, it is a flat-out lie.

In reality, the Belgorod is an enormous underwater weapons system designed to carry out covert espionage and deliver an entirely new class of “Intercontinental Nuclear-Powered Nuclear-Armed Autonomous Torpedoes” codenamed “Poseidon.”

The Belgorod’s entry into service and ability to carry multiple Poseidon “mega torpedoes” has caused some analysts to question whether the stage is now set for a renewed undersea Cold War between the United States and Russia.

And while concerns over the Belgorod have merit, one detail that has been mostly overlooked is who will actually be at the helm of Russia’s latest massive undersea “wonder weapon.”

Rather than the Russian Navy, a prominent and well-known instrument of Moscow’s military power, the Belgorod will enter the shadowy fleet of Russia’s “other,” highly-classified Navy: the Main Directorate of Deep-Sea Research, or Glavnoye Upavlenie Glubokovodsk Issledovannii.

Also known as GUGI or Military Unit 40056, the Main Directorate of Deep-Sea Research is the least known and arguably most secretive branch of the Russian military.

So while many are understandably concerned with the Belgorod’s potential ability to wage nuclear war, by entering GUGI’s black fleet, Russia is likely demonstrating that its more immediate goal is to establish itself as a “gray zone” superpower, capable of carrying out devastating espionage and covert warfare from the shadows.

Due to its highly-classified existence, little is known about Russia’s Main Directorate of Deep-Sea Research (GUGI).

It is generally believed that GUGI was first established in 1976, with the creation of the 10th Department of the Defense Ministry Main Directorate of Deep-Sea Research.

From its inception, GUGI has operated autonomously from the other five branches of the Russian military, reporting directly to the Ministry of Defense.

The primary focus of GUGI involves deepwater espionage and covert intelligence, including tapping undersea communications cables, installing movement sensors to detect other nations’ submarines, and recovery of wrecked ships, aircraft, and satellites from the seafloor.

Forming the tip of the GUGI spear are elite “Deep-Sea Spetsnaz” or “Special Forces” units, known as Hydronauts.

Russian military sources have claimed that GUGI Hydronauts undergo the same selection process as space-bound cosmonauts to ensure they can work at depths of up to 1.9 to 3.7 miles under the ocean’s surface in miniature submarines.

In addition to the newly commissioned Belgorod, GUGI is said to operate an extensive fleet of specialized submarines, oceanographic research ships, and unmanned or autonomous undersea drones. By some accounts, Russia’s shadow navy is said to operate the world’s largest fleet of covert crewed deep-sea vessels.

Reportedly, GUGI has around six to eight nuclear-powered submarines, referred to as “nuclear deep-sea stations,” capable of operating indefinitely, thousands of feet under the ocean’s surface.

GUGI’s personnel and covert fleets serve out of remote naval stations, far from Russia’s conventional naval fleets. The most well-known of these black sites being located at Olenya Bay, near Russia’s border with Norway.

Within Russia, the existence of GUGI is rarely mentioned, and the mysterious naval branch almost never appears in Russian state media. In one notable exception, the spy fleet did enter the public spotlight following a fire aboard the directorate’s Project 10831 submarine, the Losharik, in July 2019.

Fourteen members of the Losharik’s crew were killed in the fire, including seven sailors holding the rank of First Rank Captain and two recipients of the Hero of the Russian Federation award.

GUGI was never expressly mentioned in accounts by Russian state media. However, the presence of so many high-ranking naval officers on such a small vessel (believed to have a complement of 20 sailors) was a significant clue that Losharik was not a run-of-the-mill submersible and instead, the sub was likely carrying out high-risk testing or covert operations at the time of its fire.

The Belgorod Enters the GUGI Fleet

Measuring 608 feet from stern to tip, roughly 39 feet more than the U.S. Navy’s Ohio-class submarines, the newly commissioned Belgorod is the world’s longest known submarine. However, it isn’t the Belgorod’s mammoth size that has raised concerns amongst Western defense experts.

Prominent naval expert and open-source intelligence analyst H.I. Sutten described Poseidon as a stealth “nuclear mega-torpedo” that could “change the shape of nuclear deterrence and become one of Russia’s most feared weapons.”

In May this year, popular Russian TV presenter and propagandist Dmitry Kiselyov reiterated this sentiment, threatening the United Kingdom with “1,600-foot-tall tsunamis” that would render the entire British Isles a “radioactive desert.”

Russia has claimed Poseidon is capable of carrying a 100 megaton nuclear warhead. However, recent estimates suggest the torpedoes would be outfitted with much smaller 2-megaton warheads.

According to a recent Congressional Research Service report, the Belgorod can house up to eight Poseidon “mega torpedoes.” So even with the lower 2 megaton warhead, the Belgorod’s total nuclear payload launched at a major coastal U.S. city, such as Los Angeles or New York, would result in millions of deaths and render the metropolitan centers a nuclear wasteland for decades.

However, before picking up and moving inland, it could be some time before Poseidon becomes a part of Russia’s arsenal, if at all.

“This is still a technology in development, both the torpedo and the platform,” Hans Kristensen, Director of the Nuclear Information Project at the Federation of American Scientists, recently told CNN.

Current estimates say Poseidon won’t be operationally ready until sometime around 2030. Even this projection could be lofty, considering the development of the recently commissioned Belgorod first began over three decades ago with the design of the Soviet Oscar II class cruise missile submarine.

In addition, Western sanctions over Russia’s invasion of Ukraine will hurt Moscow’s ability to develop new military technologies. Particularly platforms like Poseidon, when cost and practicality will likely outweigh the more pressing demands of land and air weapons desperately needed to maintain the ongoing conflict in Ukraine.

Many defense analysts predict the Belgorod will ultimately serve as a test vessel for Russia’s future Project 09851 Khabarovsk class of nuclear-power submarines.


Brothers Ehsan and Shakil Ahmad are selling their latest book alongside the digital art it inspired in an attempt to shake up book publishing.

Little is currently known about the still-in-development Khabarovsk submarine, other than it is reportedly based on Russia’s Borei class subs and said to be designed to carry up to six Poseidon torpedoes.

Russia has ordered the development of four Khabarovsk class subs, with at least two beginning construction in 2014 and 2017. The first Khabarovsk class sub was slated to float in 2020. However, the vessel has not yet tested open waters and is likely years away from being fully operational.

In the last several years, Russia’s spy fleet has demonstrated an increased interest in the vast network of transatlantic undersea cables crisscrossing the seafloor between North America and Europe.

Spanning more than 800,000 miles, the roughly 400 active fiber optic cables that make up the transatlantic undersea cable network account for more than 97% of the communications between the U.S. and Europe.

A 2020 confidential NATO report described the Russian Navy’s “aggressive probing” of undersea networks, warning there could be severe consequences if Russia attempted to bug the communication cables. The potential for Moscow to try and destroy undersea cables during a time of war was another doomsday scenario mentioned by NATO officials.

In early January, Chief of the Defense Staff and head of the British Armed Forces, Sir. Tony Radakin said there had been a “phenomenal increase in Russian submarine and underwater activity,” adding that Moscow could “put at risk and potentially exploit the world’s real information system, which is undersea cables that go all around the world.”

A sizeable portion of the Department of Defense’s FY2023 proposed budget centers on Domain Awareness, particularly in bolstering the U.S. Navy’s capability to track undersea threats.

Whether or not the Belgorod will ever live up to the hype of being a mega-sub capable of delivering devastating stealth nuclear torpedoes remains to be seen.

Ultimately, the more immediate concern for Western nations should likely be on how Moscow intends to use its latest mammoth submarine to wage espionage and covert warfare.

As recent history has shown, Moscow is far more capable of waging asymmetrical, hybrid warfare – such as cyberattacks or election interference campaigns – than it is at projecting conventional military prowess, such as on the battlefields in Ukraine.

During the Belgorod’s commissioning ceremony, Deputy General Director for Military Shipbuilding and Special Programs at Sevmash, Vladimir Korolev, said, “The World Ocean is, in fact, the last frontier on our planet that has not yet been fully mastered by mankind. The entry into the Navy of this submarine opens up new opportunities.”

Given Russian President Vladimir Putin’s unambiguous disdain for the West, it’s likely pertinent for Western defense leaders to consider precisely what those “new opportunities” might be.