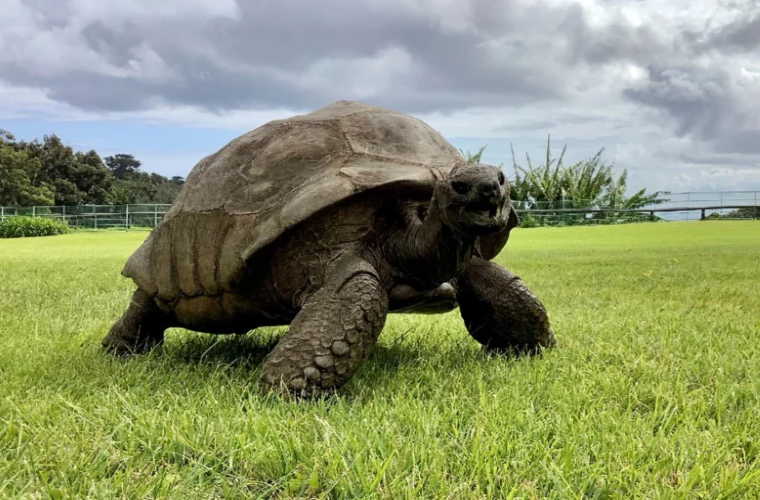 At 190 years old, Jonathan the tortoise has been declared the oldest living tortoise ever to live. Plus, his caregivers say, he is still sexually active even at his advanced age, regularly getting it on reptile style with two of the other tortoises also living on the St Helena Government House grounds.

A TORTOISE CAN LIVE LONGER THAN OTHER LAND ANIMALS

Tortoises are known for their long lives. In captivity, they regularly grow to 100 years of age, and in the wild, they can reach as much as 150 years old. The difference in expected lifespan is due to the foods available in the wild and the varying quality of care tortoises in captivity receive.

Now, the Guinness Book of World Records has weighed in, declaring the 190-year-old Jonathan the oldest living tortoise ever recorded.

BORN IN 1832, JONATHAN IS STILL LIVING HIS BEST LIFE

Johnathan, a giant Seychelles tortoise, first arrived at St Helena (his current home) in 1882. According to a piece for PetaPixel, “A letter in the island’s records states that the tortoise was a gift to St. Helena from British colonial administrator Sir William Grey-Wilson, who later became the island’s governor in 1887.”

“Jonathan was fully grown at that time [of arriving at St. Helena], which would be at least 50 years old, so his hatching year would have been about 1832,” said Teeny Lucy of the St. Helena SPCA in the same piece. “He is the oldest land animal in the world — [there are] many older [animals] in the ocean!”

Recent reports told the story of a shark currently living in the waters off of Greenland that was also around when European settlers first reached the United States over 400 years ago. However, land animals rarely outlive humans, much less by decades, making Jonathan a rare animal even for his species.

“His official record title is oldest chelonian – a category which encompasses all turtles, terrapins, and tortoises,” explains Guinness World Records. “The previous oldest chelonian was Tu’i Malila, a radiated tortoise that lived to be at least 188. Presented to the royal family of Tonga by Captain Cook c.1777, Tu’i Malila remained in their care until its death in 1965.”

“Jonathan is believed to have been born c. 1832, thus making him 190 years old in 2022,” adds Guinness. “Jonathan’s age is an estimation based on the fact that he was fully mature, and hence at least 50 years old when he arrived in St Helena from the Seychelles in 1882. In all likelihood, he is even older than we think.”

Lucy explained that Jonathan is feeling his age a bit, with his sense of smell all but gone and his eyesight ruined by cataracts. Still, Lucy notes, “he knows his territory so well that he moves about the large paddock and grazes the grass with no problems.” She also says Johnathan “has a very good appetite” and can sense his caregivers moving around him, probably from the vibration and sounds of their footsteps.

Most surprising, according to reports, the elder tortoise statesman hasn’t lost his um, lust for life, especially when it comes to showing his affection for the giant Indian Ocean tortoises that share his island home.

“In spite of his age, Jonathan still has good libido and is seen frequently to mate with Emma and sometimes Fred,” says Joe, one of the veterinarians who care for Jonathan. “Animals are often not particularly gender-sensitive!” added Joe.

JONATHAN THE TORTOISE LIKES TO MELLOW OUT TOO

Jonathan’s caregivers indicate that there is no clue how much longer he will keep going, but note that his appetite and libido both remain strong, which are encouraging signs. Also, they point out that the warm climate of his St Helena home likely contributes to his longevity.

De-Extinction Company Colossal Gets a Mammoth Investment, Wants to Resurrect the Dodo.


Colossal Biosciences says it wants to bring the DoDo back to life...

“These tortoises do not hibernate as there would be no need in the Seychelles,” said Lucy, “but as it can get quite cold in the winter here, they do all slow down a lot and spend more time inside their shells or tucked into piles of grass left for them by the gardeners at Plantation House.”

Of course, based on his swinging lifestyle, Jonathan probably needs all of the rest he can get. The same probably goes for Fred and Emma, at least, for as long as Jonathan is still feeling frisky.