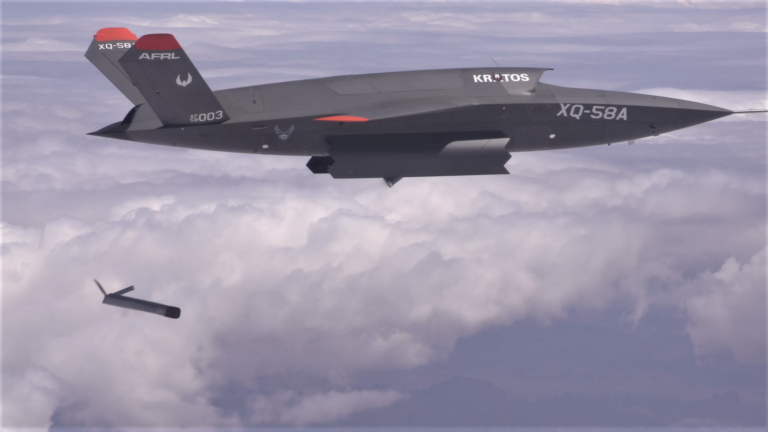 According to the Air Force, on March 26, 2021, the Valkyrie opened its payload doors and released an ALTIUS-600, a small tube-launched ALTIUS-600 autonomous drone manufactured by Aera-I.

The test conducted at Yuma Proving Ground in Arizona represents the XQ-58A Valkyrie’s sixth flight test and the first release of a weapons system from its internal weapons bay.

The XQ-58 Valkyrie is being developed as part of the U.S. Air Force’s “Low-Cost Attritable Strike Demonstrator” (LCASD) program, under the USAF Research Laboratory’s “Low-Cost Attritable Aircraft Technology” (LCAAT) project portfolio. With the Valkyrie, the Air Force hopes to field a new class of low-cost, long-range, high-performance strike drones that can be manufactured quickly through commercial manufacturing processes.

The exact cost of the XQ-58 UAV hasn’t been established yet. However, in a 2020 paper published by the Mitchell Institute on Understanding the Promise of Skyborg and Low-Cost Attritable Unmanned Aerial Vehicles, staff analysts expect LCAAT systems to fall between the $2 million to $20 million range depending on the system’s degree of sophistication.

In a 2019 interview with Defense News, then-assistant secretary of the Air Force for acquisition, technology, and logistics, Will Roper said when produced in volume, the Valkyrie would cost “a couple million bucks.”

Even at the high-end $20 million estimates, the XQ-58 would still be much cheaper than, say, the $80 million-per-unit cost of an F-35 Lightning stealth Joint Strike Fighter.

Apparently soaring towards operational readiness, the Valkyrie will provide Air Force commanders with a “third choice” between expensive, advanced aircraft meant to last for decades and single-use precision-guided munitions.

The XQ-58’s low cost and ease of acquisition mean Air Force Commanders can comfortably use the drone in high-risk surveillance, reconnaissance, and direct-action roles where a certain amount of losses are expected. “We can take risks with some systems to keep others safer,” said Roper in the same 2019 interview with Defense News.

In addition to being a low-cost UAV alternative, the Air Force is also looking into using the Valkyrie as an autonomous “loyal wingman” and part of the Air Force’s Skyborg program.

With Skyborg, the Air Force intends to pair crewed fighter planes with armed autonomous UAVs that can perform scouting, defensive, or even offensive missions. The former head of Air Force acquisitions, Roper, went as far as to say that artificially intelligent Skyborg systems could “be incorporated into a manned fighter cockpit to act as an assistant to the pilot like R2-D2 in the ‘Star Wars’ films.”

If the prospect of having a loyal airborne R2-D2 wasn’t enough, in the recently announced test, the Valkyrie successfully launched another autonomous drone while in flight.

The ALTIUS-600 is a tube-launched, 27-pound autonomous aerial system (UAS) that can be used for electronic warfare, signals intelligence, counter-UAS, and intelligence, surveillance, and reconnaissance (ISR) missions. The ALTIUS-600 can be launched on land, sea, or air and additionally outfitted with a 3 to 7-pound payload, turning the UAS into a loitering munitions platform.

According to Area-I, the Georgia-based defense company that manufactures the UAS, the ALTIUS-600 has a demonstrated endurance of over 4 hours of flight time and a range of 276 miles (440 km).

The Air Force says the recent test was conducted in partnership with Kratos UAS and Aera-I to develop software and fabricate a carriage to allow the XQ-58 to release the ALTIUS-600. After release, the Air Force says, “the XQ-58A completed additional test points to expand its demonstrated operating envelope.”

“This is the sixth flight of the Valkyrie, and the first time the payload bay doors have been opened in flight,” said Alyson Turri, demonstration program manager in an Air Force press release. “In addition to this first SUAS separation demonstration, the XQ-58A flew higher and faster than previous flights.”