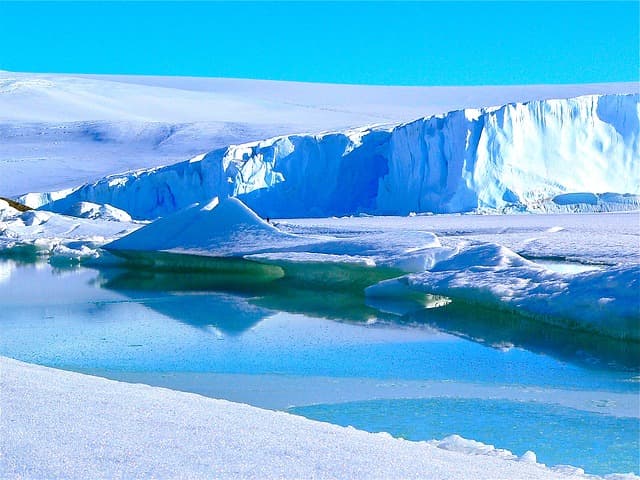 Scientists recently discovered a rare mineral deep within the ice of Antarctica. After boring into the ice more than a mile, they extracted a yellowish-brown mineral called jarosite which, though seldom found on Earth, is known to exist in abundance on the dusty red planet of Mars.

Now, scientists may be closer to understanding what conditions might have allowed the mineral to form on Mars, and its possible connections to our frigid continent here on Earth.

In 2004, the NASA Opportunity rover collected an abundance of the fine-grained jarosite. It caught many scientists by surprise because this mineral needs water, iron, sulfate, potassium, and extremely acidic conditions to form. This caused many scientists to theorize that perhaps billions of years ago, dust containing the jarosite ingredients may have been trapped in ice deposits deep within the planet. So if this was possible on Mars, perhaps similar mineral composites could form in the icy depths of the Antarctic as well. These observations led to a recent study performed by a team of researchers from the University of Milano-Bicocca in Italy.

Analysis: What Exactly Did Scientists Find?

TALDICE, or the TALos Dome Ice CorE, is a European ice core research project whose main objective is to understand the ice age cycles from the ice core samples, similar to how we trace back the age of a tree with its rings. However, during analysis, they stumbled across jarosite within the core, which was surprising to many of the researchers working in cooperation with TALDICE.

One of those researchers who carried out the analysis was Giovanni Baccolo, who focuses primarily on glaciology, environmental radioactivity, ice cores, and dust. He had the opportunity to analyze some of the samples and told The Debrief in an email, “When I found jarosite in our ice samples from the depths of the Antarctic ice sheet, I admit that I was surprised. It was clear that on Earth no one had linked jarosite with ice and glaciers. But the same was not true for Mars.”

“The importance of the discovery of jarosite on Mars is related to the fact that to form jarosite you need liquid water, so finding jarosite there meant that in the geologic past of the planet a certain amount of liquid water was present.”

Baccolo also stressed that, “Our study shows that the formation of jarosite in deep ice is a viable geochemical reaction and this gives credit to the ice-weathering model proposed to explain the presence of jarosite at Meridiani Planum. Ancient glaciers on Mars could have a role not only in shaping the surface of the planet, but also in its geochemistry and mineralogy. This is, in my opinion, the coolest part of this discovery.”

Meet the Man Building an Anti-Gravity Device, and the Alien God That Inspired Him


Pushed by the Frontiers of Science, The Debrief's Chris Plain Falls Down The Rabbit Hole With The Man Trying To Detect Warp Signatures and Defy Gravity

Outlook: Life May Be More Common ThaN We think

Scheduled for a February 18th landing on the Jezro Crater of Mars, the Perseverance Rover will spend the next 687 days looking for evidence of chemical bio-signatures, and in turn will also be collecting many mineral samples for a proposed retrieval mission in the future. This will allow scientists in a variety of different fields to study materials gathered from the dusty planet.

Baccolo adds that, “Perseverance will land at a very exciting site, where the evidence that liquid water was present in the past is strong. This will also study the sediments that probably have been deposited by an ancient river. The rover will also look for the traces of ancient living organisms, which could have been present on the planet when it was radically different from now.”

Ancient living organisms would be quite a discovery, but it doesn’t end there. A complex climatic history is sure to be preserved on Mars, as well as other places like Jupiter’s moon Europa, whose oceans are also encased within ice. However, the prospects of finding evidence of life does not apply only to  ancient living organisms, but perhaps also the possibility of current extant organisms.

“For an ice core scientist having the possibility to deal with such samples would be the coolest thing ever,” Baccolo adds. “And of course if there is ice, there is also the probability that under particular conditions, liquid water is present. So if you find ice, you could also find traces of life. Never say never.”