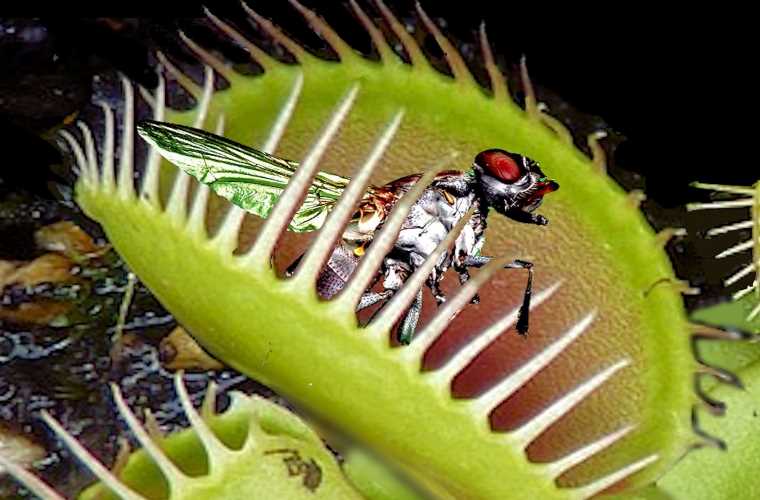 Swedish researchers have developed organic artificial neurons, aka nerve cells, capable of communicating directly with a biological system. In this case, the system the researchers interfaced with is a carnivorous plant known as the Venus flytrap. This first-of-its-kind breakthrough could allow for more direct integration of artificial organic neurons within biological systems, including prosthetics, bionics, and brain-machine interfaces.

In 2018, researchers at Linköping University developed the first complementary and printable organic electrochemical circuits like those found in living organisms. This research led to the development of organic chemical transistors that could communicate via positive and negative electrons, just like biological cells.

Now, after optimizing their organic transistors so they could be printed directly onto plastic foil, researchers from the same university have connected their transistor to an actual living organism; a Venus flytrap.

“We chose the Venus flytrap so we could clearly show how we can steer the biological system with the artificial organic system and get them to communicate in the same language,” says Simone Fabiano, associate professor and principal investigator in organic nanoelectronics at Linköping University. In short, this resulted in the ability to send a signal to the plant and cause it to close even when a fly was not present.

According to the press release announcing this breakthrough achievement, that is mainly because “Organic semiconductors can conduct both electrons and ions, thus helping mimic the ion-based mechanism of pulse (action potential) generation in plants.” In the case of the Venus flytrap, an electrical impulse of less than 0.6 V was able to induce “action potentials” within the plant, causing the plant’s trap to close.

“For the first time, we’re using the transistor’s ability to switch based on ion concentration to modulate the spiking frequency,” says Padinhare Cholakkal Harikesh, a post-doctoral researcher at the Laboratory of Organic Electronics. That spiking frequency within the artificial neurons provides the signal directing the biological system to react.

“We’ve also shown that the connection between the neuron and the synapse has a learning behavior, called Hebbian learning,” added Fabiano. “Information is stored in the synapse, which makes the signaling more and more effective.”

ARTIFICIAL NEURONS MAY AID THE DEVELOPMENT OF BIONICS & OTHER APPLICATIONS

While practical applications of the teams’ research are still likely years away, there is hope that these types of artificial neurons that can connect with a biological system will aid in the development of specific artificial-biological interfaces. These applications may include uniquely sensitive human prostheses, implantable systems for relieving neurological diseases, and even soft intelligent robotics.

“We’ve developed ion-based neurons, similar to our own, that can be connected to biological systems,” explains Chi-Yuan Yang, a post-doctoral researcher at the Laboratory of Organic Electronics. “Organic semiconductors have numerous advantages – they’re biocompatible, biodegradable, soft, and formable. They only require low voltage to operate, which is completely harmless to both plants and vertebrates.”

Results of the study were published in the journal Nature Communications.