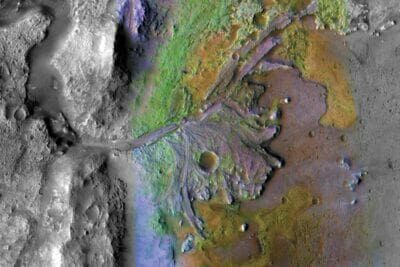 
NASA Wasn't Convinced Back Then, But All Subsequent Missions Prove Mars Was Habitable Once

Even before Cosmonaut Yuri Gagarin made history as the first human in space, the Soviet Union had already fired two unsuccessful flyby missions to Mars. Three more failures followed, with the last of those failing to leave Low Earth Orbit in November of 1962. The U.S. launched their own failed Mars mission, Mariner-3, in 1964, before Mariner-4 made the first successful flyby of the fourth rock from the sun on July 15, 1964.

All told, these seven missions represent the first in 49 total (and counting), including the two spacecraft that just arrived at Mars last week, and the NASA Perseverance rover landing coming this week. The UAE’s Hope orbiter and the China National Space Administration’s Tianwen-1 orbiter have already established successful orbits. Tianwen-1’s lander and rover are expected to drop to the planet’s surface around May 21 of this year. NASA’s Mars 2020 Mission is scheduled to arrive on Thursday, February 18, and if the craft’s orbit insertion is successful, the rover Perseverance and its sidekick, the Ingenuity Helicopter drone, will rocket towards the surface to begin a month’s long series of experiments.

Like those first failed missions over 60 years ago and the majority that have followed, this latest round aspires to continue to expand our knowledge of the red planet and aid in the ongoing search for life outside our own fragile home. The list is full of successes and failures. Still, as far back as 1976, scientists were already finding tantalizing hints that Mars may have once been habitable, possibly even harboring some extreme forms of life deep under the planet’s surface.

The First Hints of Life on Mars

Those first hints came from NASA’s Viking 1 and Viking 2 landers in 1976. They were explained in great detail by Gilbert V. Levin, a member of that original team, in a 2019 piece for Scientific American titled “I’m Convinced We Found Evidence of Life on Mars in the 1970s”.

In that piece, Levin explains how, “On July 30, 1976, the LR returned its initial results from Mars. Amazingly, they were positive. As the experiment progressed, a total of four positive results, supported by five varied controls, streamed down from the twin Viking spacecraft landed some 4,000 miles apart. The data curves signaled the detection of microbial respiration on the Red Planet. The curves from Mars were similar to those produced by LR tests of soils on Earth. It seemed we had answered that ultimate question.”

As with nearly all potentially groundbreaking results, NASA needed confirmation. Levin points out, “When the Viking Molecular Analysis Experiment failed to detect organic matter, the essence of life, however, NASA concluded that the LR had found a substance mimicking life, but not life.”

Levin is critical of the missions that have gone since, noting that, “inexplicably, over the 43 years since Viking, none of NASA’s subsequent Mars landers has carried a life-detection instrument to follow up on these exciting results. Instead, the agency launched a series of missions to Mars to determine whether there was ever a habitat suitable for life and, if so, eventually to bring samples to Earth for biological examination.”

Some may agree with his criticism, but the list of missions that have followed (the successful ones, at least) have indeed found those signs of past habitability and are also moving closer to the type of sample return mission he noted.

For example, alongside its other science gathering objectives, the current Perseverance rover is designed to collect and stash any tantalizing Martian soil samples it may encounter for a possible future mission to bring back to Earth for study. It may amount to another incremental step, and not the “Wow” moment Levin and his team encountered 45 years ago. Perseverance and many of the missions since Viking have continued to show Mars as a once wet, temperate, and yes, habitable environment.

Signs of Habitability and Life on Mars

After another handful of failures by the Soviets to place a lander of their own on Mars, NASA’s Mars Global Surveyor entered orbit in 1996, spending seven years mapping the planet’s surface. A few months later, that mission was followed by Mars Pathfinder, whose rover, Sojourner, was the first such vehicle to operate on another planet’s surface.

Those two successes set the stage for the Mars Odyssey orbiter, which found signs of past water in 2002, followed by NASA’s pair of rover’s Spirit and Opportunity, who would sniff out the first direct evidence of water in Mars’ past. As explained on that mission’s website, “With data from the rovers, mission scientists have reconstructed an ancient past when Mars was awash in water. Spirit and Opportunity each found evidence for past wet conditions that possibly could have supported microbial life.”

Specifically, Opportunity’s studies of two Martian craters “revealed evidence for past inter-dune playa lakes that evaporated to form sulfate-rich sands,” while Spirit’s data determined “Mars was characterized by impacts, explosive volcanism, and subsurface water. Unusual-looking bright patches of soil turned out to be extremely salty and affected by past water.”

Follow-up experiments were conducted by a series of subsequent missions, starting with the NASA Phoenix lander setting down successfully in 2008, before performing its three months of tests to determine prior habitability of the planet. For those tests, the mission homepage notes Phoenix “studied the Martian soil with a chemistry lab, TEGA, a microscope, a conductivity probe, and cameras,” and also points out that the tests were a success.

“We have water,” lead scientist for the Thermal and Evolved-Gas Analyzer (TEGA) William Boynton said of the mission. “We’ve seen evidence for this water ice before in observations by Mars Odyssey orbiter and in disappearing chunks observed by Phoenix last month, but this is the first time Martian water has been touched and tasted.”

Following another pair of failed missions in 2011, one by Russia and another by China, eight more missions have targeted Mars, including the three currently underway. For NASA, that included the Curiosity rover, which landed in August 2012 and is still operational. The MAVEN orbiter arrived in 2014 and continues to return data. Finally, the still-running Insight lander set down in November of 2018. Most have continued to produce data supporting a former habitable climate on Mars. The current Perseverance mission is expected to run the most complex series of tests yet, including the potential sample return.

Both India’s Mars Orbiter Mission and the ExoMars 2016 mission confirmed that water once existed on Mars. The ExoMars mission’s Schiaparelli lander failed when it crashed into the planet’s surface.

“It Would Take A Near Miracle for Mars to Be Sterile…”

All those signs point toward a once habitable Mars in the past but may leave room for some hardy life forms to still exist beneath the planet’s surface today.

As Levin said in his 2019 piece, “Life on Mars seemed a long shot. On the other hand, it would take a near miracle for Mars to be sterile. NASA scientist Chris McKay once said that Mars and Earth have been ‘swapping spit’ for billions of years, meaning that, when either planet is hit by comets or large meteorites, some ejecta shoot into space. A tiny fraction of this material eventually lands on the other planet, perhaps infecting it with microbiological hitch-hikers. That some Earth microbial species could survive the Martian environment has been demonstrated in many laboratories. There are even reports of the survival of microorganisms exposed to naked space outside the International Space Station (ISS).”

Levin may be right, and he may also have a legitimate gripe that his 1976 results have not been directly followed up on for nearly five decades. However, if the UAE’s Hope orbiter mission, the CSA’s Tianmen-1 mission, and NASA’s Mars 2020 rover mission have some success that builds upon the Vikings’ results, then the question his team thought they answered all of those years ago may finally be confirmed very soon.