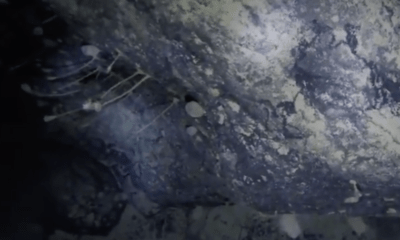 Drilling through over a half-mile of ice in the Filchner-Ronne Ice Shelf, researchers discovered stationary life, including several alien-like sponges and stalked animals- attached to a boulder on the seafloor, said a release issued this morning by BAS.

Researchers were stunned to come across the mysterious marine life in complete darkness with temperatures well below freezing and over 160 miles from the open ocean. According to BAS, very few animals have ever been seen in these extreme conditions. The study’s discovery and results were published on February 15th in the journal  Frontiers in Marine Science.

“Our discovery raises so many more questions than it answers, such as how did they get there? What are they eating? How long have they been there? How common are these boulders covered in life? Are these the same species as we see outside the ice shelf or are they new species? And what would happen to these communities if the ice shelf collapsed?” said biogeographer and lead author on the study, Dr. Huw Griffiths.

Floating ice shelves cover more than 900 million square miles of the Antarctic continental shelf. However, according to BAS, “only a total area of around the size of a tennis court has been studied through eight prior boreholes,” making it one of the most unexplored regions in the world.

Current theories suggest life becomes far rarer the further you move away from open water and sunlight. Previous studies of these harsh environments have found limited numbers of small mobile scavengers and predators, such as fish, worms, jellyfish, or krill. Until recently, scientists did not expect to find stationary filter-feeding organisms -which depend on a supply of food from above – living deep in these icy depths.

While drilling through the ice to collect sediment samples, the BAS geologists were first surprised to hit rock instead of mud on the freezing Antarctic seafloor. This initial surprise paled in comparison to the shock researchers got when they lowered a camera into the borehole.

The camera footage revealed several types of sponge-like creatures and reed-shaped animals attached to the large flat rock’s surface. The boulder was also covered in a multi-layered sheet of microorganisms called a microbial mat. Researchers noted that lining the rock were wispy fibers, which they theorized could be a component of the bacterial mat or a small predator related to jellyfish called a Hydroid.

“We were expecting to retrieve a sediment core from under the ice shelf, so it came as a bit of a surprise when we hit the boulder and saw from the video footage that there were animals living on it,” said Dr. James Smith, a geologist at BAS, who was part of the drilling team.

The discovery represents the first-ever record of a rocky natural environment supporting life deep beneath an Antarctic ice shelf. BAS says the finding goes against all previous theories of what types of life could survive in such extreme conditions.

Because researchers had the one-in-a-million happenstance of drilling right on top of it, right now, they can’t say if the rock and odd marine life attached to it are a true anomaly or if more of these types of systems may be common deep under the Antarctic ice.

“This discovery is one of those fortunate accidents that pushes ideas in a different direction and shows us that Antarctic marine life is incredibly special and amazingly adapted to a frozen world,” says Dr. Griffiths.

Based on water currents in the region, BAS scientists calculated the biological community might be over 900 miles from the closest source of photosynthesis. Researchers say they didn’t see any other mobile sealife around the rock. Presently, it’s unknown what these strange creatures’ food source could be. However, scientists noted waves in the sediment typically formed by currents, leading to the theory that food is being carried from afar.

Other deep-sea organisms are known to collect nutrients from glacial melts or chemicals from methane seeps. However, researchers won’t know more about these particular Antarctic creatures until they can collect samples of the organisms.

Researchers note that with climate change and the rapid collapse of Antarctic ice shelves, time may be running out to study and protect these unusual ecosystems.

“To answer our questions, we will have to find a way of getting up close with these animals and their environment – and that’s under 900 m of ice, 260 km away from the ships where our labs are,” said Dr. Griffiths.
“This means that as polar scientists, we are going to have to find new and innovative ways to study them and answer all the new questions we have.”