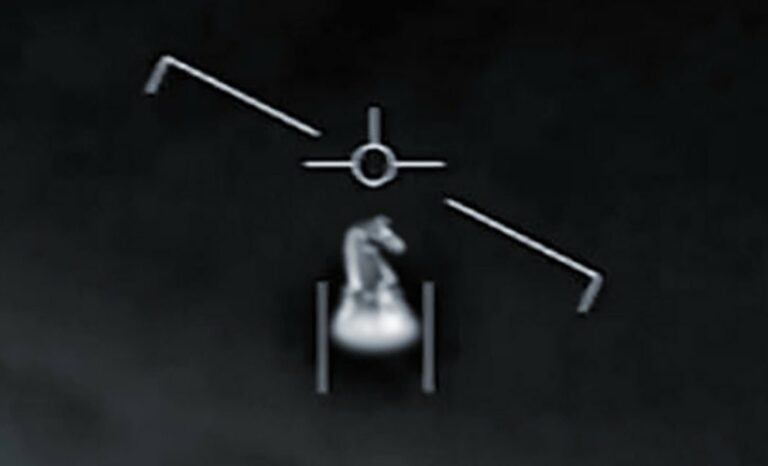 After a week of trolling the US over its renewed interest in UFOs, Russia formally unveiled its new prototype fighter jet, dubbed the Sukhoi Checkmate, at the MAKS international air show on Tuesday.

According to the manufacturer, the new fighter will feature stealth capability, a max speed of nearly Mach 2, a range of just over 1,860 miles, and will be capable of carrying a payload of 16,300 pounds. It’s claimed the new design will also possess “artificial intelligence support for the pilot’s work” and can be converted to an unpiloted or two-seat model.

On July 12, Rostec posted a photo on its unverified Twitter account showing a knight chess piece placed over an object purported by the Department of Defense (DoD) to be Unidentified Aerial Phenomena. The still image used by Rostec was part of a brief video captured by the ATFLIR targeting pod of a F/A-18 fighter jet in 2004 and officially released by the DoD in 2020. Additionally, the photo contained the phrase, “Guys, everything is simpler than you think.”

Also, on July 12, United Aircraft Corporation posted an image on its official Instagram page showing a knight chess piece placed on another UAP image captured by US Navy pilots. In this instance, UAC used a photograph first published by The Debrief in December 2020. The DoD likewise has confirmed the original picture is authentic and involves an incident that has been investigated by the Pentagon’s “UAP Task Force.” Rostec’s image was accompanied by the words, “Mystery will be unveiled on July 20.”

Finally, on July 18, UAC published another cryptic tweet on its Russian language Twitter account featuring an iconic UFO photo made famous by the TV show The X-Files, with the words “Guys, everything is simpler than you think.” Placed over the “flying saucer” in the original photo was again an image of a knight Chess piece.

In the same PR blitz, Rostec promised to “present a fundamentally new military aircraft” at this year’s International Aviation and Space Salon (MAKS) Airshow in Moscow.

Now, confirmed to be a new Sukhoi-class single-engine, stealth, light tactical fighter jet, the Checkmate aircraft clearly bears no real resemblance to the odd, “tic-tac” or sphere in a cube, shaped objects US aviators have reportedly encountered not far from America’s East and West coasts. Worth noting, the new Sukhoi fighter displayed at MAKS is not fully operational but rather a large-scale prototype demonstrator.

It would appear Russia was just trying to throw some shade on America’s renewed interest in UFOs or UAP rather than claim responsibility for these mysterious encounters by possessing their own radically novel aircraft. Russia’s poking fun at UAP is somewhat intriguing considering, as The Debrief previously reported, the Kremlin has been remarkably quiet on the subject of UFOs in the last few years.

In a presentation to Russian President Vladimir Putin, UAC said Checkmate’s first flight is expected to occur in 2023. Russian state media added that UAC expects to start making production deliveries of the new fighter in 2026. Putin, who was on hand for the big unveiling, said, “What we see today in Zhukovsky clearly shows that Russian aviation has great potential for development, and our aircraft industry continues to create new competitive aircraft.”

The majority of aviation and military analysts say the focus of the new Sukhoi Checkmate will most likely be on military export sales to other countries. A video teaser published by Rostec on July 20 showed various scenes from the United Arab Emirates, India, Vietnam, and Argentina.

“This is a game-changing offer on the market,” Dmitry Stefanovich, a research fellow at the Center for International Security, Primakov Institute of World Economy and International Relations (IMEMO RAS) in Moscow, told CNN on Tuesday. “It’s been a long time since Russia demonstrated single-engine fighters. For a very long time, there haven’t been any new Russian light combat aircraft on the market. And no fifth generation as such.”