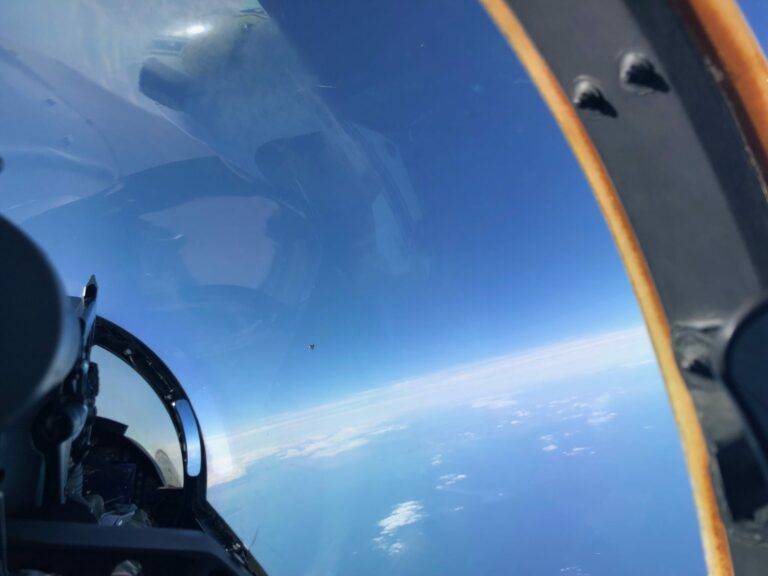 Photo Showing Navy Encounter with UAP leaked to The Debrief


Taken from the cockpit of an F/A-18 fighter jet, the photo shows an unidentified aerial object as it hovered above the ocean.

The Debrief has learned of an unclassified, leaked UFO photo, said to have been widely distributed in the U.S. intelligence community, which purportedly shows what the Department of Defense (DoD) has characterized as “Unidentified Aerial Phenomena.”

The Debrief learned of the existence of the leaked UFO photo from a defense official who has been verified as being in a position to have access to the UAPTF intelligence reports. Additionally, the same two officials with the DoD, and one from the U.S. intelligence community with whom we previously spoke, confirmed that the leaked image is the same photo provided in a 2018 intelligence position report issued by the UAPTF.

The photo itself is said to be considered “Unclassified and For Official Use Only,” however because the image and accompanying report were shared on a secure intelligence community network, the officials we spoke with would only acknowledge it under strict conditions of anonymity. Prior to any agreement, The Debrief did verify these sources were in fact in positions within the U.S. intelligence community and under the authority of the U.S. Director of National Intelligence.

The Debrief reached out to Pentagon spokeswoman Susan Gough for clarification about the photo, who responded to our questions via email on December 3, 2020.

“To maintain operations security and to avoid disclosing information that may be useful to potential adversaries, DOD does not discuss publicly the details of reports, observations or examinations of reported incursions into our training ranges or designated airspace, including those incursions initially designated as UAP,” Gough’s reply read.

According to officials The Debrief spoke with, the photo appears to be the same as one referenced in our previous reporting, described as an “unidentified silver ‘cube-shaped’ object” encountered by military pilots as it hovered motionlessly over the ocean. It appears evident that the image was captured by the backseat weapons systems operator of what appears to be an F/A-18 fighter jet.

While details are difficult to make out, the image appears to depict an inverted bell-shaped object, which is not readily identifiable given the photo’s context. The object appears to possess ridges or other protrusions along its lateral edges, extending toward its base.

The object bears at least some resemblance to a GPS dropsonde, an atmospheric profiling device designed to be dropped from aircraft. However, notably absent in the pilot’s photo is the GPS receiver which trails below a dropsonde’s square-cone parachute.

The Debrief reached out to Terry Hock, In-Situ Sensing Facility (ISF) Manager at the National Center for Atmospheric Research’s Earth Observing Laboratory, about whether the object in the photo resembled any recognizable atmospheric research equipment.

“In regards to the photo, while the image of the object is not clear, it certainly does not look like a dropsonde,” Hock told The Debrief, “because there are no signs of a dropsonde below the object where the object could potentially be a parachute, and it does not have the right shape.”

“Dropsondes are dropped into hurricanes over water, not over military bases,” Hock added. “A dropsonde descent is ~15 m/s, thus it would be very brief for a pilot to see and there would obviously need to be an aircraft above the Navy aircraft which could be confirmed with ATC.”

In Hock’s opinion, the object most closely resembles a Mylar balloon.

“There are scientific research groups that do launch balloons which they refer to as drifters,” Hock told us. “[T]his may be a possibility.”

Another possibility is that the photo depicts some variety of military radar reflector or research balloon. However, two defense officials we spoke with said pilots who encountered the object described that, unlike a balloon under similar conditions, the object was completely motionless and seemingly unaffected by ambient air currents.

While they did not describe the photo as compelling, all three officials we spoke with seemed dismissive of the idea that it depicts a balloon. According to these sources, the photo would not have been issued if there were reasonable estimates that the object was a balloon, given the nature of the intelligence report in which it appeared.

The Debrief has not been able to speak with any of the pilots involved in order to confirm the accounts described in the intelligence reports. In 2018, the Navy changed its guidelines concerning the reporting of unknown objects by military personnel, and the surfacing of this photograph seems to indicate that some aviators are coming forward with sighting reports.

It was also expressed to us that the photo is not related to an image provided in a separate intelligence report released earlier this summer, as reported previously by The Debrief. Officials who had seen that report said it contained an image of a large equilateral triangle with rounded or “blunted” edges and large, perfectly spherical white illuminated areas in each corner. The image of the large triangular craft was said to have been captured in 2019.

Earlier this year, the Pentagon officially released three videos of what they say show “Unidentified Aerial Phenomena” captured in 2004 and 2015. The newly leaked photo of the balloon-like object is said to have been captured in March 2019. [Editor’s Note: The original version of this article said the image was captured in 2018. Subsequent information later confirmed the date to be March 2019. See: Pentagon Confirms Leaked UFO Images Are Authentic.]