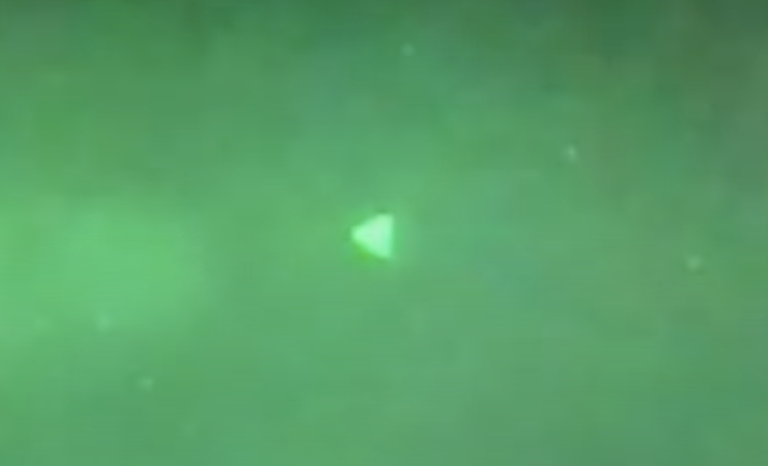 “I can confirm that the referenced photos and videos were taken by Navy personnel. The UAPTF has included these incidents in their ongoing examinations,” Pentagon Spokesperson Susan Gough told The Debrief in an email. John Greenewald, who runs the popular government document archive The Black Vault, also confirmed the videos were authentic via a statement from Gough.

On December 3, 2020, The Debrief reported on a leaked UFO photograph captured by the rear-seat weapons system officer of an F/A-18 fighter jet.

The object in the photo, now referred to as the “Acorn,” and two other newly leaked images depicting unusual aerial objects, were published by KLAS Las Vegas investigative journalist George Knapp on April 6, 2021. The other two images, described by Knapp as “the metallic blimp” and “sphere,” were all reportedly captured within a period of 30 minutes on the same day.

Initially, when The Debrief reported on several intelligence reports of UAP encounters widely distributed to the U.S. Intelligence Community, the photo of the “Acorn” object was said to have been captured in late 2018 off the East Coast. Subsequently, sources familiar with the incident have confirmed to The Debrief the date reported by Knapp of March 2019 is accurate.

Sources from several intelligence agencies who have seen reports on UAP told The Debrief that some of the confusion about specific dates involves when reports were made available to different agencies and components, in addition to when the UAP Task Force began official dissemination of materials to intelligence analysts.

The Debrief has obtained original copies of three photographs, believed to be the same ones reported by Knapp to have been discussed in a private briefing hosted by Nevada billionaire and owner of Bigelow Aerospace, Robert Bigelow, on April 6, 2019.

In his article at Mystery Wire, Knapp reported the photos to show three separate objects, all taken on the same day. So far, The Debrief has not been able to independently confirm that these were three different objects. However, analysis of the image metadata supports that pilots took all three photos over a 32 minute period on the same day.

According to the metadata, the “Acorn” image was captured by the forward-facing camera of an Apple iPhone 8 on March 4, 2019. A similar analysis using Jeffrey Friedl’s Image Metadata Viewer reveal the “Blimp” and “Sphere” photos to have been captured on the same date of March 4, but describe the images as being “screenshots.”

Metadata analysis supports that the photos obtained by The Debrief and published by Knapp are the same, the only exception being with metadata recorded by the inclusion of a watermark on the images posted by Mystery Wire.

In our initial reporting, The Debrief acknowledged what many others have suggested, that the object(s) depicted in the series of photos could resemble a high-altitude or atmospheric testing balloon.

Following up on this possibility, The Debrief obtained copies through the Freedom of Information Act of every air safety hazard report filed to the Naval Safety Center from 2004 to 2020. The hazard reports were unable to provide any accounts of encounters with balloons or other objects that appear to coincide with the time the photographs are believed to have been taken.

In contrast to the lack of currently available information regarding the purported object(s) captured in the leaked UFO photos, the hazard report showed that significant post-flight follow-up occurred after the Marine pilot’s encounter with the balloon.

The report states that the pilot’s heads-up display (HUD) video footage was reviewed and analyzed. Additional queries were also made to several local-area air traffic control sites to verify if any Notice to Airmen (NOTAMS) regarding range operations involving balloons had been issued.

Investigation into the event, which was ruled to have been with a 4-6 foot civilian balloon, went all the way up the chain of command, with recommendations and comments provided by the commanding officer of VMFA-225.

Examining other similar hazard reports affirm how seriously the military takes incursions with airborne interlopers. The lack of hazard reports for the purported UAP incident suggests that, at minimum, the pilots at the time did not consider the object(s) they encountered to have been a balloon.

Corbell reports the night-vision video and accompanying briefing slide are related to a July 2019 incident involving the USS Russell off the coast of San Diego. While the video shows a perfectly triangular-shaped aircraft, Corbell says that briefing materials described the object as having a three-dimensional “pyramidal” shape.

The video, now confirmed by the DoD to be authentic, is particularly intriguing as it relates to a frenzy of “mysterious drone” encounters by multiple U.S. Navy warships in July of 2019.

Freedom of Information Act requests and expanded reporting by the defense news site The Warzone showed entries in various ship’s deck logs revealed the encounters with the “drones” as having occurred over multiple days and appearing to be rather extensive.

Deck logs published by The Warzone show the USS Russell recording up to nine different sightings of “drones,” all within under an hour on July 15, 2019.

On April 5, 2021, the Navy’s top officer, Admiral Michael Gilday, Chief of Naval Operations, acknowledged that the Navy has yet to identify what type of “drones” were flying around the destroyers in July 2019 or who was operating them.

“I am aware of those sightings, and as it’s been reported, there have been other sightings by aviators in the air and by other ships not only of the United States, but other nations — and of course other elements within the U.S. joint force,” Gilday told Jeff Schogol of Task and Purpose.

The exact date the video of the “pyramid” object was filmed and whether it directly relates to the July mysterious “drone” sightings by the USS Russell is presently unknown.

Another leaked UFO photo and briefing slide shared by Corbell was reportedly captured by the USS Omaha, showing what was described as a spherical-shaped object “suspected to be a transmedium vehicle” after being observed descending into the water and disappearing.

In The Debrief’s previous reporting, we revealed that mysterious “transmedium” vehicles, or craft that appear to be capable of operating both in the air and underwater, were of particular interest to the UAP Task Force, and a focus of recent late-2020 briefings and intelligence reports.

While airborne encounters with UAP continue to dominate public conversations, officials familiar with the efforts to examine these perplexing events have told The Debrief that encounters with mysterious, fast-moving, “non-cavitational” unidentified underwater vehicles are of particularly serious concern for the UAP Task Force and intelligence officials.

Active-duty Navy officials tell The Debrief  that in late 2019, the Navy conducted testing of marine sonar systems in the general area where destroyers had previously encountered the unrecognized drones.

During testing, which was said to involve several classes of surface vessels and submarines, sonar arrays detected what were classed “anomalies” in some of the deepest regions and underwater trenches within the SOCAL training range.

Officials, who were not cleared to speak on the record and did so only under a condition of anonymity, declined to elaborate on what types of anomalies were detected, adding that explanations for what could account for the detections had not been provided to them.

The ship said to have photographed the object, the USS Omaha, is one of the U.S. Navy’s Independence-class littoral combat ships. The small surface vessels are designed for operations nearshore in littoral or coastal zones. The ships possess lower air defense and surface warfare capabilities than destroyers, emphasizing speed and response to asymmetric threats in shallow water areas.

The exact date the USS Omaha photographed the alleged “transmedium” craft has not been revealed.

The Omaha was commissioned in 2018, and its homeport is at Naval Base San Diego. According to records, the USS Omaha departed homeport for sea trials on May 7, 2019. The ship was also underway in the SOCAL range area July 9-19, when other naval vessels encountered unidentified UAVs.

In the email response to The Debrief, spokesperson Gough confirmed the leaked images were captured by Navy personnel and have been examined by the UAP Task Force. Gough, however, declined to comment on whether any of the objects shown in the images have since been identified.

The Debrief also inquired if the photos and video were categorized as “classified” and whether the Pentagon was launching an investigation into the purported leak.

Gough declined to comment, stating, “As we have said before, to maintain operations security and to avoid disclosing information that may be useful to potential adversaries, DOD does not discuss publicly the details of either the observations or the examinations of reported incursions into our training ranges or designated airspace, including those incursions initially designated as UAP.”

Confirmation of the image’s authenticity fuels the debate and discussion regarding UAP encounters, which have steadily increased since three videos showing similar mysterious objects appeared online in late 2017, and were subsequently authorized for official release by the Pentagon last Spring.

Currently, the Director of National Intelligence has been directed to provide a report on UAP to the Senate Select Intelligence Committee. That report is due by the end of June 2021. However, there are some indications that it could be delayed. At least for now, all available information continues to support that these events or encounters are occurring, although what they may represent remains undetermined.

The Debrief is continuing to pursue this developing story and will provide updates as soon as they become available.