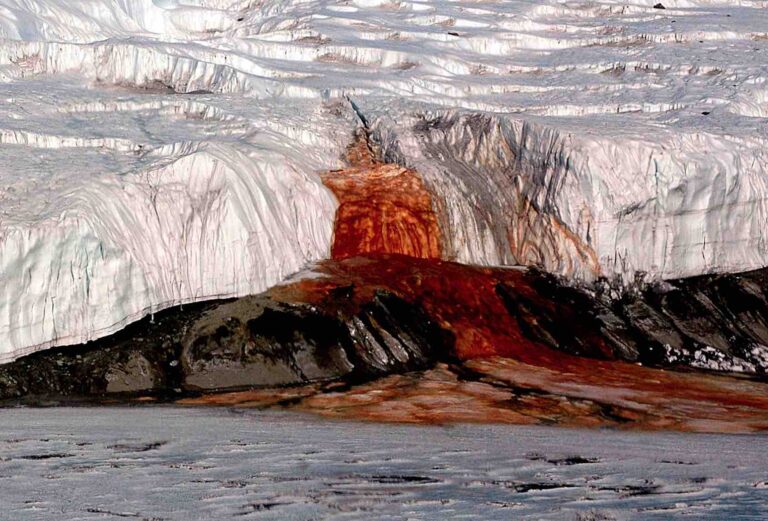 Blood Falls: How a Macabre Glacier May Help the Search for Extraterrestrial Life

Antarctica has long remained a place of great interest to scientists from all over the world, and for a variety of different reasons. But one particular discovery on the icy southernmost continent has left many scientists not only scratching their heads, but maybe also feeling a little squeamish.

Flowing from the Tony Glacier into Lake Bonney is Blood Falls, a waterfall which spews crimson liquid. And while this startling site may be off-putting to look at, its presence may offer another piece in the greater cosmic puzzle that is the search for extraterrestrial life.

Background: The Discovery of Blood Falls

The gory location in question was first discovered in 1911 by Australian geologist Griffith Taylor. Upon first studying it, Taylor and his research team believed the blood-red color of the water to be caused by red algae. However, recent studies that include one published in the Journal of Glaciology provide a more in-depth scientific analysis of the true origin of the deposit.

Using advanced radar technology to scan the ice layers out of which the water flowed, scientists and researchers uncovered a unique process taking place, one which has occurred now for millions of years.

According to the Journal of Glaciology paper, it is theorized that “water traveled through the glacier’s endless network of fissures and passages. After being sealed in the glacier with no sunlight or oxygen at high pressure for so long, the brine salt water turns blood red upon contact with the open air. The high concentration of iron in the water creates this iconic, otherworldly display.”

The “otherworldly display” isn’t the only thing that many researchers find interesting. The water also contains a staggering 17 different types of microbes that are able to survive in this otherwise very harsh environment, feeding off the sulfates in the water; something that had never been observed in the natural world at any time before. So while many geologists and glaciologists have focused on the glaciers themselves, this “bloody” waterfall is now catching the attention of astrobiologists as well.

Understanding how these halophiles (salt lovers) and psychrophiles (extreme cold lovers) thrive in these conditions has led many astrobiologists to consider whether it could be possible for similar microbes to survive on moons and planets with no oxygen or light, and even in sub-zero temperatures. More specifically, scientists wonder if similar hyper-saline oceans and rivers that can be found on Titan, Europa, and even Mars could also be environments where such organisms could thrive.

As we continue to study the dusty terrain of Mars using the Perseverance Rover and Ingenuity helicopter, perhaps a well-hidden lakebed or river deep below the surface of the Red Planet will yield similar results to that of Antarctica’s Blood Falls; perhaps even an area teaming with alien life.

Auditory Pareidolia: The Voices in Your Head Have a Rational Explanation

Until then, scientists will continue to study microbes here on Earth, especially those which have made their unusual homes upon the icy landscape of Antarctica.